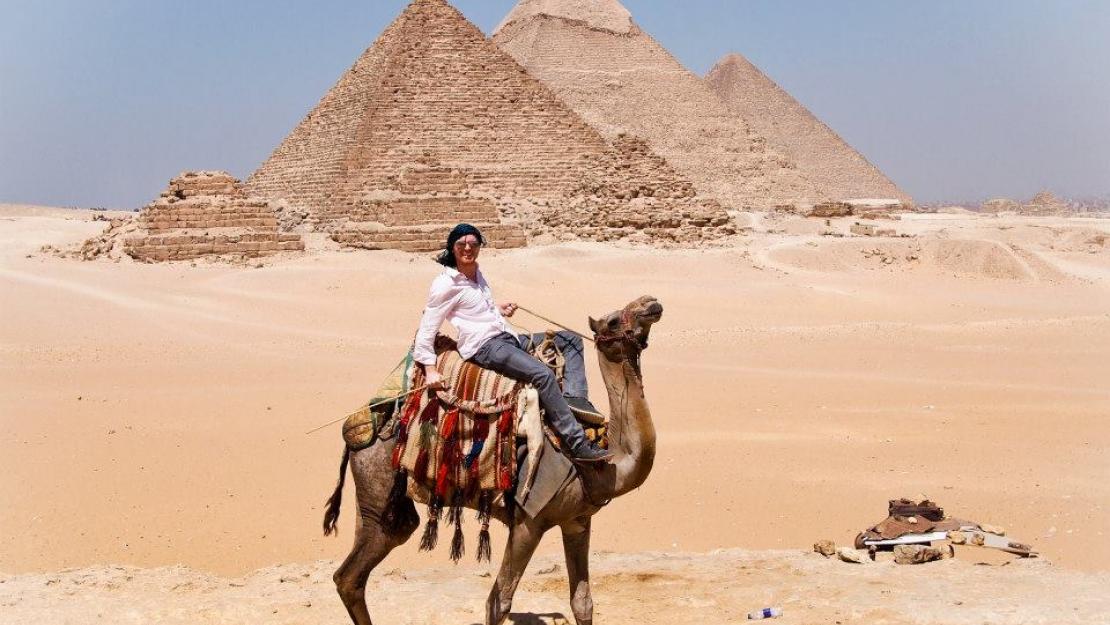 Kuehl at the Giza Pyramids

Matthew Kuehl (YAB ’05, MA’11) is currently a program specialist at the U.S.-based Higher Education for Development (HED) for the Middle East and North Africa, where he handles community college partnerships on workforce development and entrepreneurship in Egypt, Jordan, Lebanon, Morocco and Tunisia.

A fluent Arabic speaker, Kuehl has a bachelor’s in Arabic language and international studies from the University of St. Thomas. As an undergraduate, he spent a semester abroad at AUC, to which he returned in 2008 to pursue a master’s in international human rights law.

Kuehl has more than nine years of experience in the field of international education and student exchange. He previously worked at AMIDEAST in Egypt and at the Yemen College of Middle Eastern Studies.

Why did you decide to pursue a master’s in human rights law?

I had general interest in law and the UN system of human rights. My particular interest developed while I was creating new extracurricular programming for international study-abroad students at a college in Sanaa, Yemen, and we wanted to introduce students to tribal society. While scouting for tribes in northern Yemen that would host international students for a “tribal experience,” I experienced a violation during my stay that was remedied through traditional tribal legal practice. The combination of legal mechanisms such as oath-taking, protective legal standing, arbitration and restorative justice, all in the confines of “tribal honor,” intrigued me as to alternative legal systems of human rights and to research the relationship between law and society.

Why did you choose to study at AUC over other universities such as Harvard?

I chose AUC primarily due to its location. I had studied as an undergraduate year-abroad student at AUC, so I was familiar with the institution and with Cairo, and knew that AUC had some of the top academics in the region. I also wanted to study in an environment where I could develop my Arabic-language skills. Furthermore, I had a job opportunity offered in Cairo, which allowed me to work full time and pay for my part-time studies at AUC.

How would you describe your AUC experience?

The international human rights law program at AUC surpassed my expectations. The faculty in the department created a supportive environment, a rigorous academic program and quality class facilitation. Oftentimes, I felt myself positively challenged in course work and class discussions, asking difficult questions that sometimes questioned why we took a certain approach or even why we were in the program. It allowed us to further refine our ideas and the reasons for going into the field. The focus on critical legal studies and the exploration between theory and practice, or law and society, were of great benefit. It was also a great experience to have an extremely diverse cohort of students, who not all agreed on the definitions of human rights, which added to lively discussions.

What types of programs are you working with in the Middle East and North Africa?

I work with a diverse array of programs, all in the fields of workforce development or entrepreneurship. For instance, in Jordan, we work with a community college to increase the entrepreneurial skills and mindsets for students to be able to start their own businesses through curriculum revision, faculty and student training, and the creation of a campus incubator. In Lebanon, we have helped create a Center for Students with Disabilities at a local university so that all students have opportunities and access to higher education. In Jordan, we have developed the country’s first associate degree in solar energy technology to support the national strategy of increasing renewable energy sources in the country.

Do you feel that you have an insider’s perspective on the region?

I have benefited from more than nine years of living in Egypt and Yemen, as well as traveling to most Middle East and North Africa countries and speaking Arabic near fluently, which makes me feel more bicultural than having an insider’s perspective. After spending the entire decade of my 20’s living there, which were my most formative years professionally, personally and intellectually, I feel that it is just as familiar and a home to me as the United States. It definitely makes a difference going into a meeting speaking Arabic and being nuanced about the complexities of the MENA region, without coming off as “we know best for you.” It gives a credibility that I wouldn’t have without my in-depth experiences, including receiving my master’s degree from AUC.

What were some of the most memorable experiences from your time in Egypt?

Many! Of course, the [January 25] revolution was the most memorable, but one of my favorite experiences was renting a car and driving cross-country for two weeks. A great way to see and meet people off the beaten path (Dakhla was a highlight) and learning how to drive in Egypt.

What is your favorite place in Cairo?

I like Cairo from above and on the water, so definitely hanging out at one of the many rooftop patios or riding a felucca.

What do you miss the most?

Too much – mostly the unscripted way of life and socialness of people.  Oh, and Abou Ramez shawarma in Dokki.