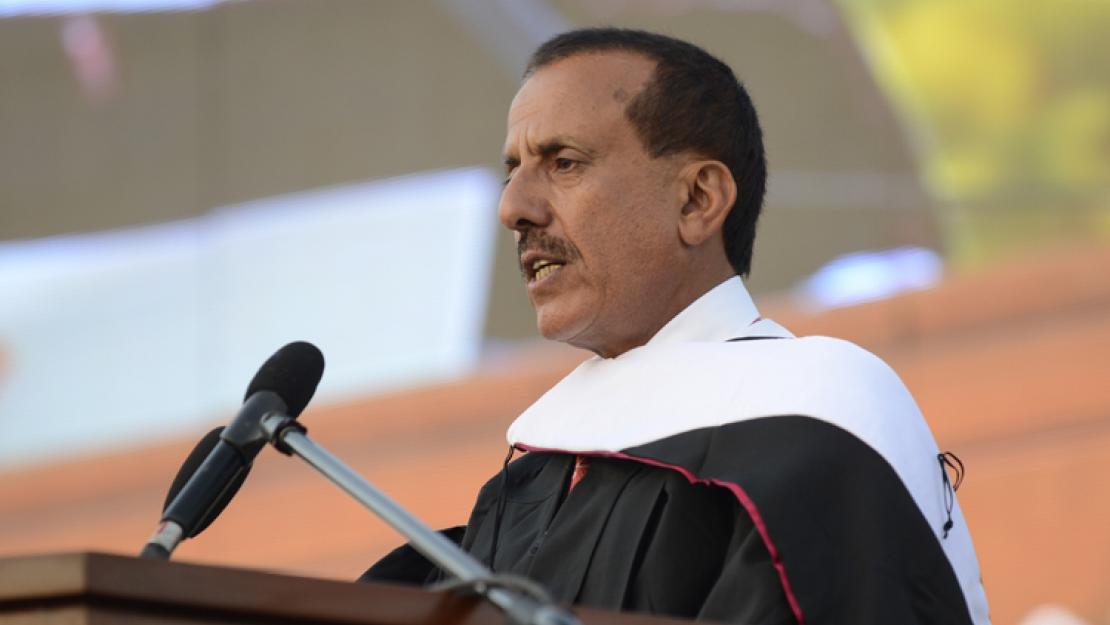 “I advise you to keep a positive outlook on things, start your day full of energy ready to conquer the world. Your generation has learned a lot from the turbulence that stormed Egypt in the past three years, and now the dust has settled. Let us put our hands together and build this country.”

With these words, Khalaf Ahmad Al Habtoor, founder and chair of Al Habtoor Group, addressed the Class of 2014 at the 91st annual commencement ceremony. A successful businessman and longtime supporter of education, Al Habtoor received an honorary Doctor of Philosophy from the University “for his dedication to fostering cross-cultural understanding, supporting humanitarian causes and advancing academic inquiry.”

In his speech, Al Habtoor emphasized the importance of rebuilding Egypt at the hands of not only its government, but, more importantly, its people. “As individuals, we are committed to help our beloved Egypt stand on its own feet and restore the old days we all miss. We miss Masr, Um el Donya. We miss the coffeeshops by the Nile, the cities and hotels full of tourists from all over the world, the greatest shows in the opera. Let us put our hands together to rebuild our Egypt. Take the first step, and we will be with you every step of the way.” To watch Al Habtoor's full speech,click here. Undergraduate class representative Ahmed Atalla, who majored in architectural engineering and served as the Student Union president, also urged his fellow graduates to pursue life goals that would better their country and the entire global community. “Let us all mark today as the day we all decide to make this world a beautiful place, a place where there is room for everyone to live happily,” he said. To watch Atalla's full speech,click here. Speaking at the graduate commencement, Sherif Kamel, ’87, ’90, ’13, dean of AUC’s School of Business, emphasized the important of contributing to the community and embracing challenges and failures on the road to success. “Egypt and the world badly need your brains, your energy and your passion,” he said. “Give them freely, but try to stay conscious of what it is you’re giving of yourself and why. I ask you to stay committed to optimism, to kindness and to the community.” To watch Kamel's full speech,click here. The 91st commencement ceremony witnessed the graduation of 193 master’s and 561 bachelor’s degree candidates. During both ceremonies, students were recognized for their outstanding academic achievements. At the undergraduate commencement, four students received the President’s Cup for achieving the highest grade point average. Those students are Ayman Ali, Aya Badawy, Liliane Abboud and Mohab Hassan. The Parents Association Cup, given to the student who best demonstrates an ability to successfully combine academic achievement with a major contribution to student activities, was awarded to Aliaa Abdel Aziz. The Ahmed H. Zewail Prize for Excellence in the Sciences and the Humanities was presented to Taher El Moataz Bellah, while the Nadia Younes Award for Humanitarian and Public Service was given to Hana Shaltout. The Student Government Cup, granted to outstanding student government leaders who positively impacted the AUC community through their work, was awarded to Fouad Hetta and Mohamed El Mansoury. At the graduate commencement, Nadine Fawzy, who received a Master of Arts in political science, was recognized with the Tawfiq Pasha Doss Award, presented annually to the best thesis in English and comparative literature and political science, alternatively. The graduate class representative, Mohga Hassib, who received her master’s in English and comparative literature, reminded her classmates not to lose determination in the face of the country’s ongoing challenges. “Graduation is something we all aspire to achieve because we hope that at the end of something, there’s a better beginning. Egypt waited for 30 years for a new beginning, then another year, and now another. ... During its long history, AUC, like modern Egypt, has ventured into several new beginnings and has endured several losses in both the private and public spheres. However, it is still standing proud and graduating its future leaders, givers and innovators.” To watch Hassib's full speech,click here. Echoing the same sentiment, President Lisa Anderson noted, “This class has seen more change in their short time as University students than most of us see in a lifetime. They are ready to dream of things that never were and to ask, ‘Why not?’”