From Aswan to AUC: Tolerance Through Diversity 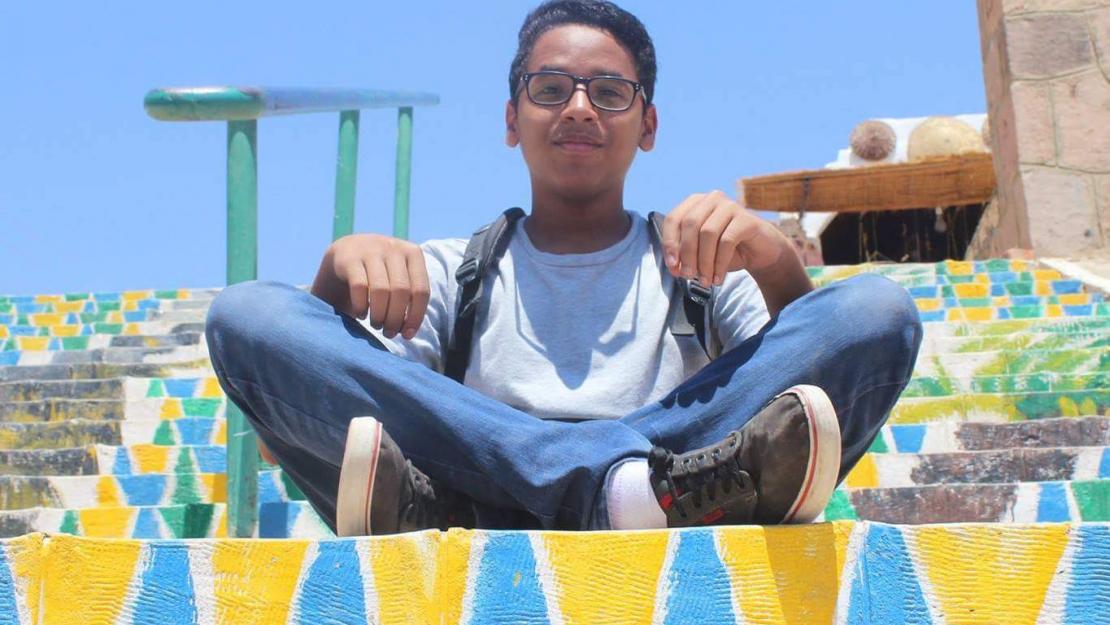 From a young age, Marwan Abdelmoneim, a freshman at AUC and the first recipient of the Khalaf Ahmad Al Habtoor Scholarship, has been internationally inclined. In fact, his desire to travel the world and interact with different cultures and societies is a large part of why he chose to study at AUC and major in political science.

The Khalaf Ahmad Habtoor Scholarship, established in 2015, allows 10 outstanding Egyptian students from outside of Greater Cairo the opportunity to study at AUC. “This scholarship program will ensure that the bright and deserving children of Egypt, from every corner of the country, have the best education possible to build their communities, their country and our region,” said Al Habtoor. “I am a believer in the value of education and its ability to transform the world.”

“I still remember when I got the call for the Al Habtoor Scholarship. It was Thursday, the 22nd of August, ” recalled Abdelmoneim. “I was shocked. My parents were so happy. I mean, it’s AUC –– the best option in Egypt, even the whole region.”

Born and raised in Aswan, Abdelmoneim’s upbringing varies from many of his Cairene classmates. “My background is different because Aswan is a small city compared to Cairo,” he said. “The community in Aswan is really small, and most people know each other.” However, Abdelmoneim has found that he and his classmates have many more similarities and common interests than differences. “We are all Egyptians, sharing similar thoughts, customs and values,” he noted.

“I love being in diverse communities,” he added, while reflecting on his year in high school spent living in Chicago with a Mexican-American family as a foreign exchange student. “Living in a diverse community teaches tolerance and acceptance, and it helps me understand that all human beings share a lot of traits, thoughts and habits. Even if problems exist between countries, humanity and love help overcome those conflicts.”

This passion for understanding and appreciating a diversity of societies and cultures has inspired Abdelmoneim’s interest in political science and journalism. “For a couple years, I’ve been really interested in politics,” he explained. “In Egypt today, you can’t just ignore everything going on around you. I find politics really interesting and want to study it more and work in this area in the future. So I chose political science as my major.”

Seeking a way to publicly express his passion for politics, Abdelmoneim began working while in high school as a journalist for Bashkatib, a network of local newspapers run by young journalists in socially, economically and geographically marginalized areas in Egypt.  “All of the journalists are 12-17 years old,” explained Abdelmoneim. “We would go out in the streets and find things to write about. The exciting thing is that we spotlight specific areas in Egypt that lack decent media coverage, and we're taught as young writers to avoid being biased, which is a big problem in the media.”

Since being at AUC, Abdelmoneim has had the unique opportunity to meet the generous man who is funding his education and also shares his love for journalism. “I met Mr. Al Habtoor, himself,” he said. “I was feeling nervous at first, but he was a really nice, modest man. We talked for a half an hour, along with President Ricciardone. He asked about my background, where I came from before college, and we got along very well.”

Looking forward, Abdelmoneim hopes to further develop his passion for journalism by writing for one of AUC’s student newspapers. Additionally, he plans to pursue his academic interests beyond the scope of political science and journalism. “I’d like to study different subjects that I might not get the chance to study anywhere else, such as film and theatre,” said Abdelmoneim.

And, of course, he will continue to follow his passion for international cultural exchange, hoping one day to even study abroad in Italy, Japan or another corner of the globe.