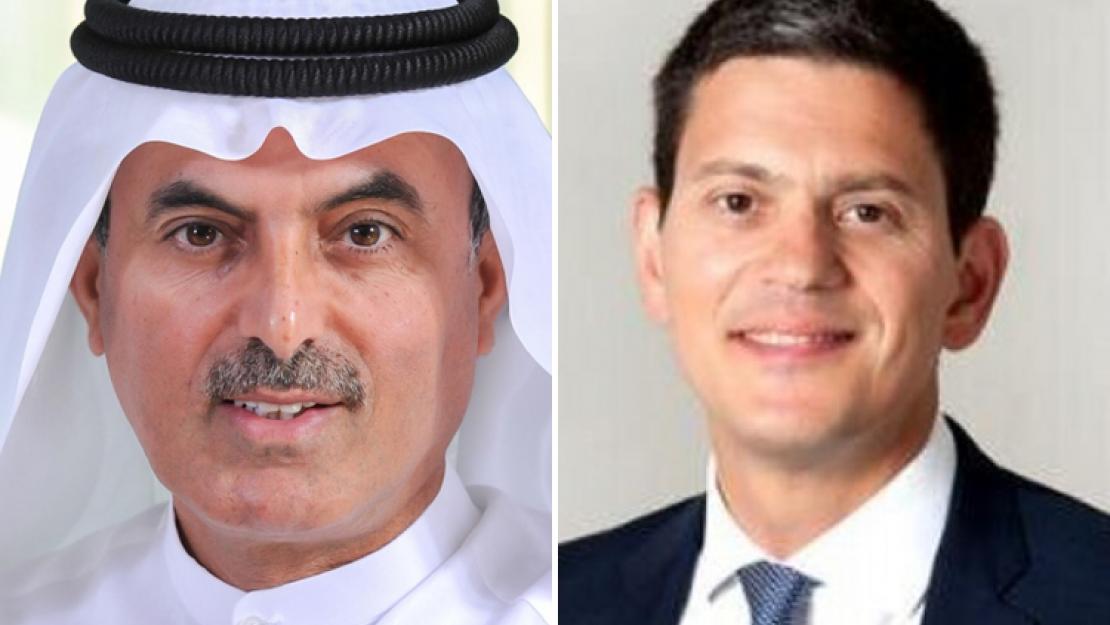 Abdul Aziz Al Ghurair and David Miliband will speak at this year’s undergraduate and graduate commencement ceremonies, respectively, and will receive honorary degrees from the University.

His Excellency Abdul Aziz Al Ghurair, CEO of Mashreq Groups and a member of the board of directors of Abdullah Al Ghurair Group of Companies, and David Miliband, president and CEO of the International Rescue Committee (IRC), will speak at this year’s undergraduate and graduate commencement ceremonies, respectively. Both will receive honorary degrees (Doctor of Humane Letters) from AUC.

Al Ghurair, who will speak at the commencement ceremony for bachelor’s degree candidates on June 17, is an active philanthropist, serving as chairman of the Abdulla Al Ghurair Foundation for Education, a leading institutional philanthropic initiative focused on education. He is deeply committed to improving and enhancing the state of education in the Arab world, specifically by making education more accessible to high-achieving young Emiratis and Arabs. Reflecting on the inspiration behind his extensive philanthropic efforts, Al Ghurair said, "Our commitment to institutionalize our philanthropy is our attempt at giving back to our country and the region that has given us so much in the best possible way."

Further demonstrating his philanthropic efforts, Al Ghurair is the president of FBN GCC, a nonprofit international network that is run by family businesses, for family businesses. The organization aims to strengthen family business governance and thus guarantee success across generations. Al Ghurair is also a trustee of New York University President’s Global Council and is on the board of directors of Emirates Foundation.

Al Ghurair was elected as the speaker of the United Arab Emirates Federal National Council (UAE Parliament) and has sat on the board of directors of major companies such as Emaar, Dubai Investments, Visa International, MasterCard, Dubai Chamber of Commerce and Industry and was co-chairman of the Arab Business Council–World Economic Forum. In addition, he was a member of the Constitutive Council for GCC Leaders and president of The Knowledge Fund.

Miliband, who will speak at the commencement ceremony for master’s degree candidates on June 10, advocates for the world’s most vulnerable populations in his role at the IRC. Specifically, he oversees the committee’s relief and development operations in more than 30 countries, as well as its refugee resettlement and assistance programs throughout the United States.

Before joining the IRC, Miliband had a long and distinguished political career in the United Kingdom. From 2007 to 2010, he was the youngest UK foreign secretary in three decades, leading important advancements in global human rights. Previously, as secretary of state for the environment in 2005-2006, he was a pioneer in creating the world’s first legally binding emissions reduction requirements. Former U.S. President Bill Clinton referred to Miliband as "one of the ablest, most creative public servants of our time".

Earlier in his career, Miliband was minister for schools, from 2002–2004; and head of Downing Street’s Number 10 Policy Unit, from 1997–2001. Additionally, he has been a member of parliament representing South Shields. He was also co-chair of the Global Ocean Commission from 2012 – 2016.

Miliband received a first class degree in philosophy, politics and economics from Oxford University in 1987. He received his master’s degree in political science in 1989 from the Massachusetts Institute of Technology, which he attended as a Kennedy Scholar.

As the son of refugees who moved from Belgium and Poland to the United Kingdom in the 1940s, Miliband brings a personal commitment to his work at IRC. He is married to the violinist Louise Shackelton. Together, they have two sons.