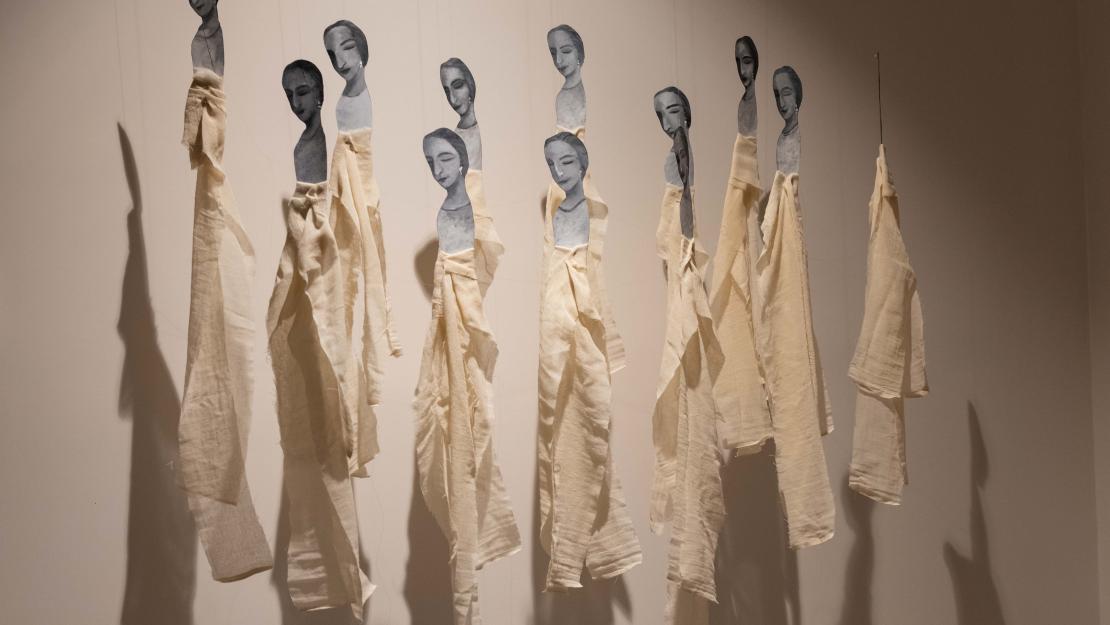 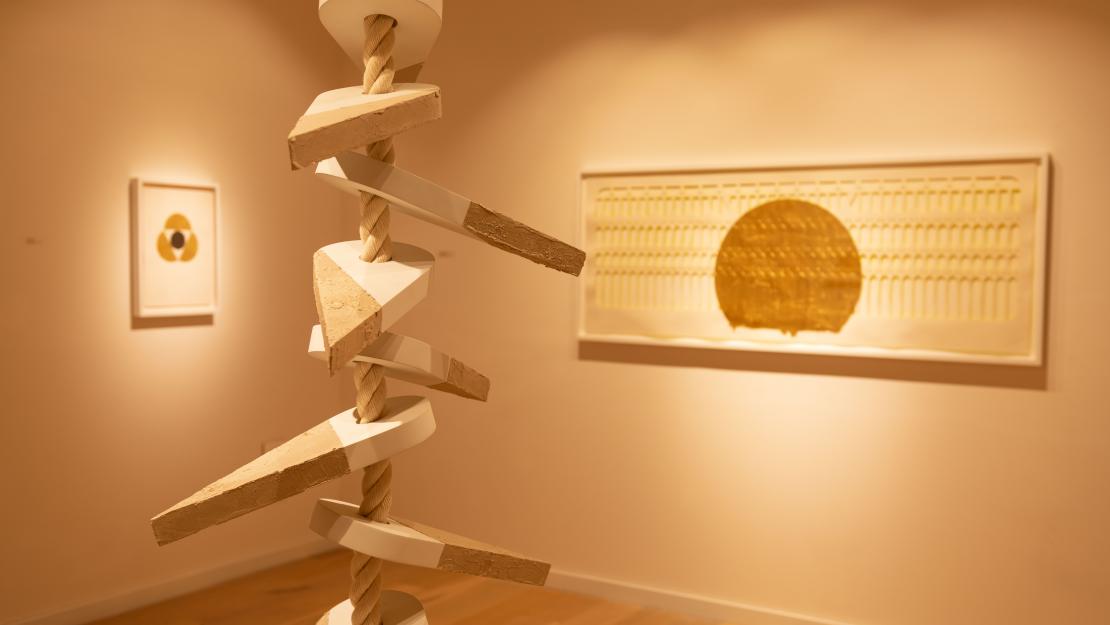 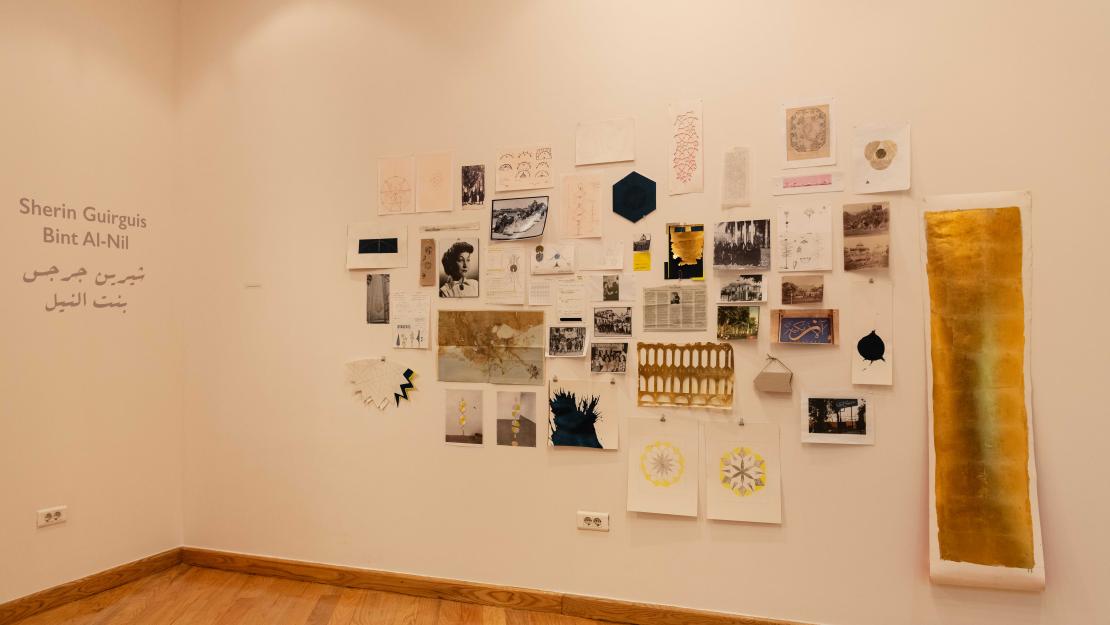 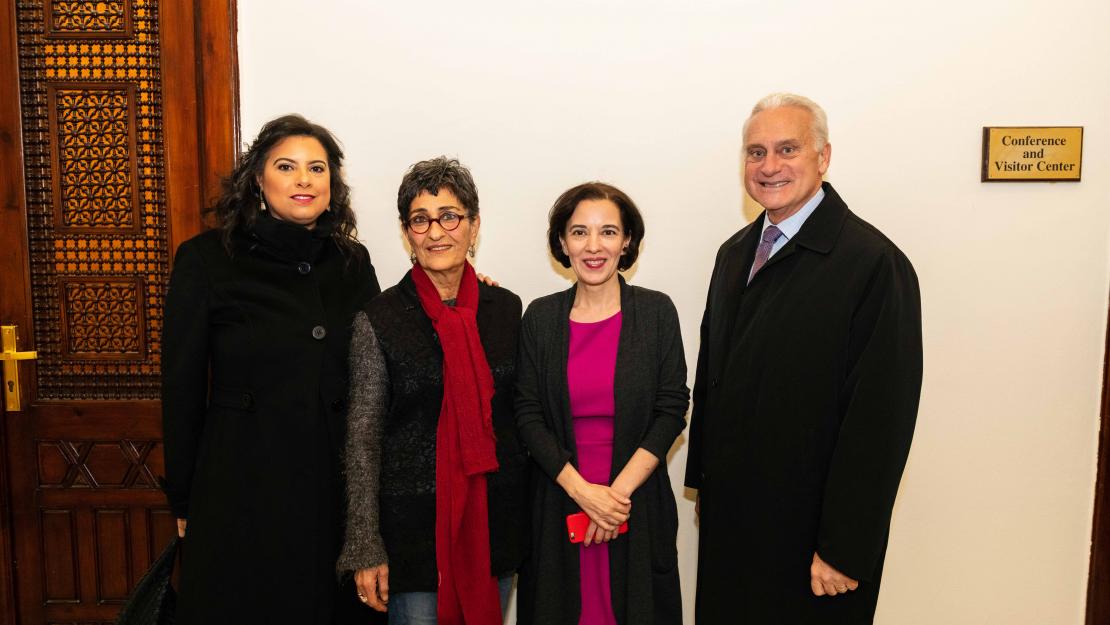 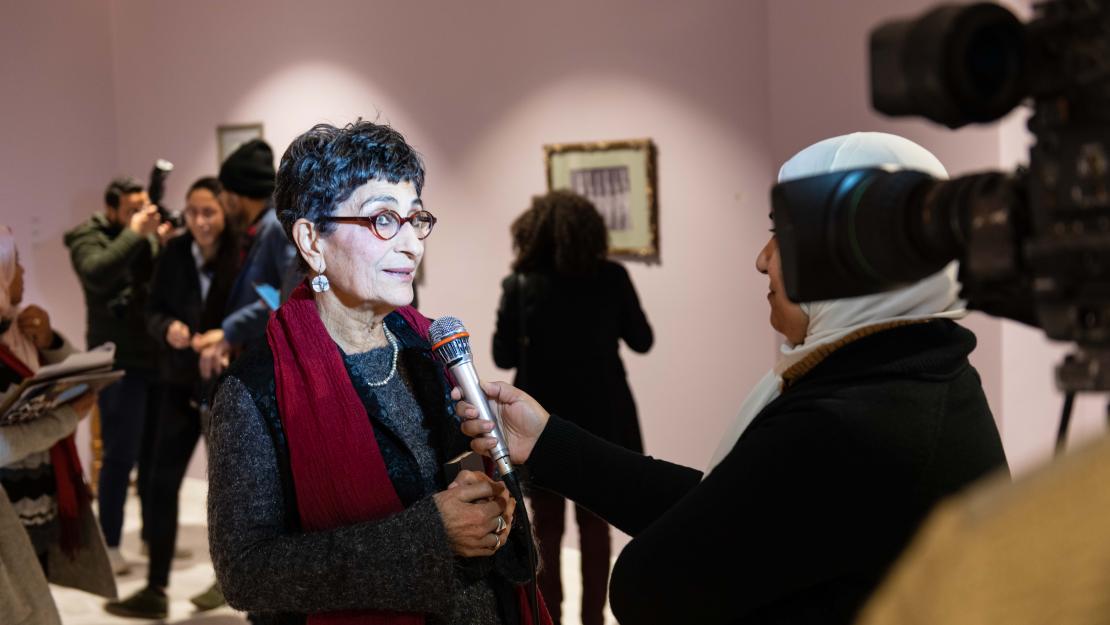 Artist Huda Lutfi getting interviewed at her exhibition 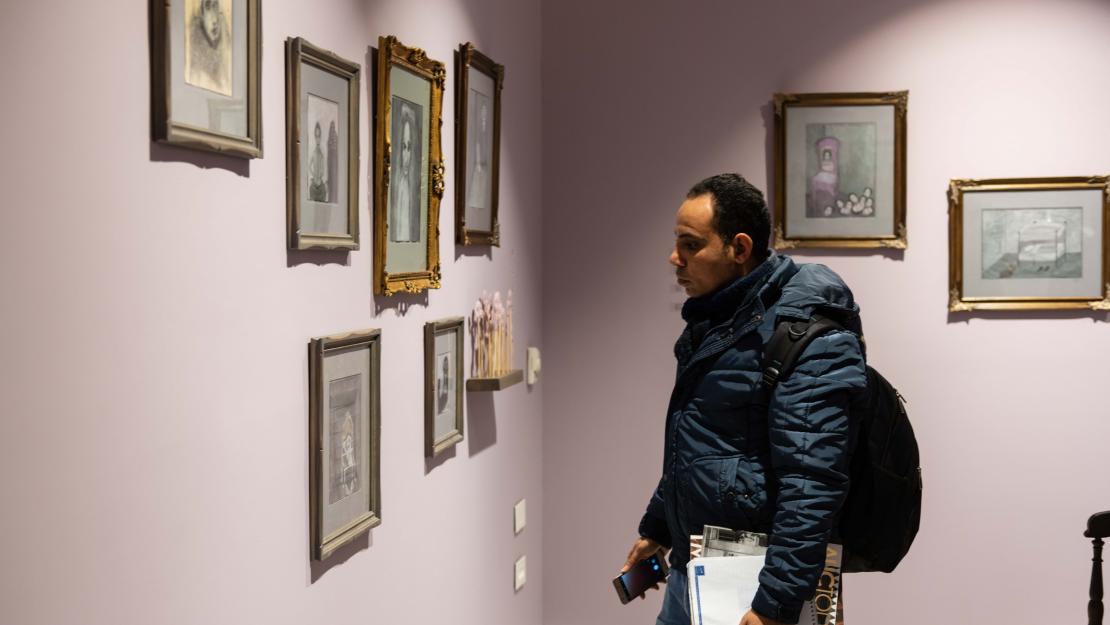 An onlooker at the new Tahrir Cultural Center exhibition 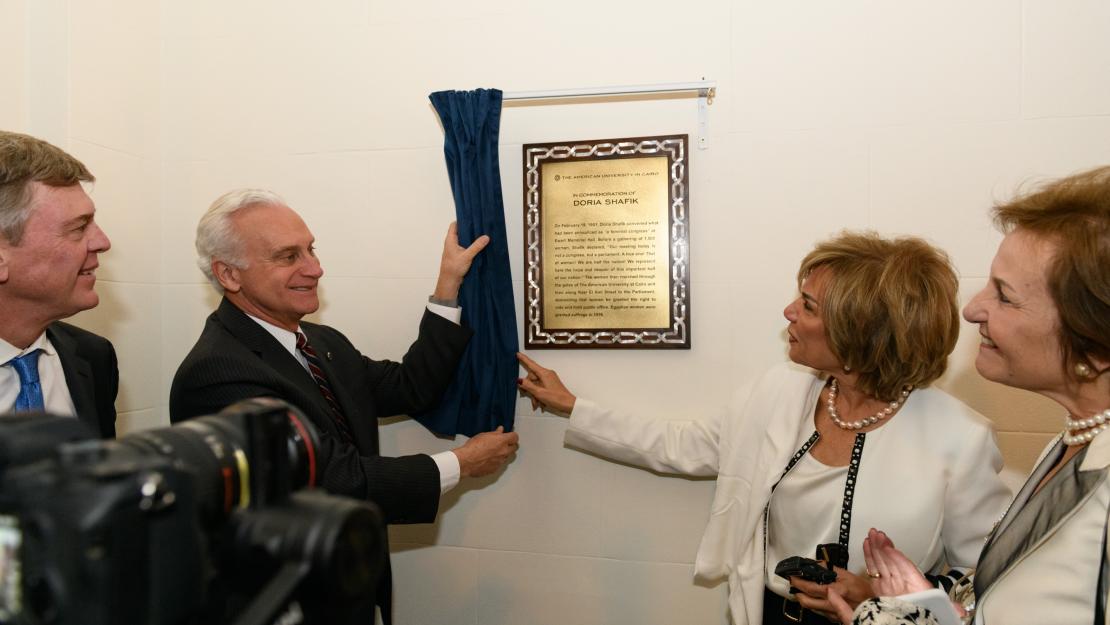 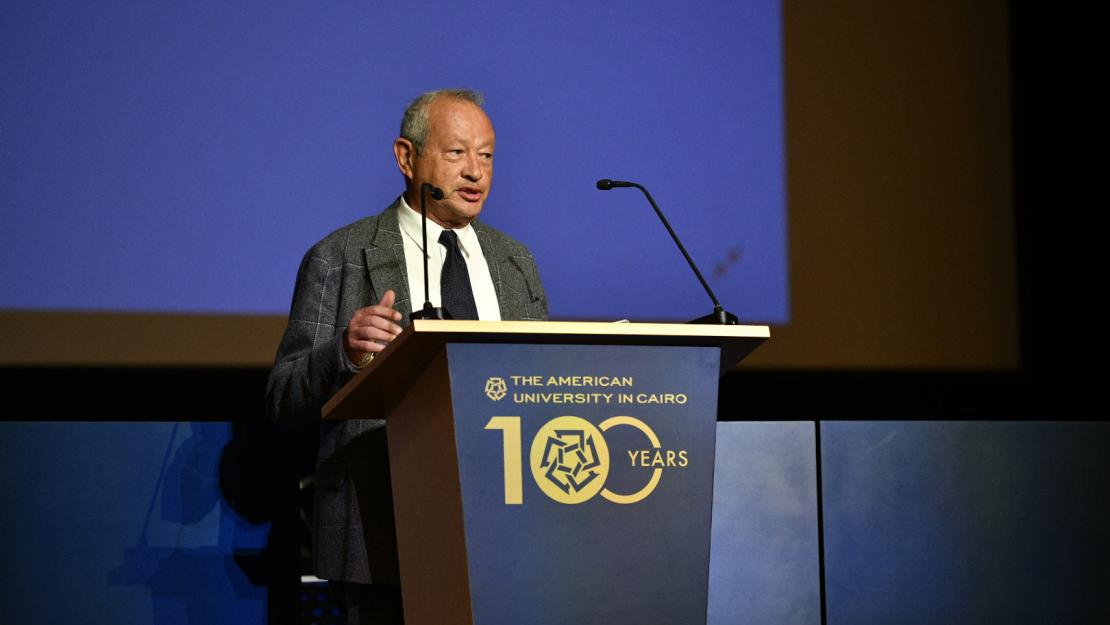 Naguib Sawiris, Prominent businessman and investor at the podium 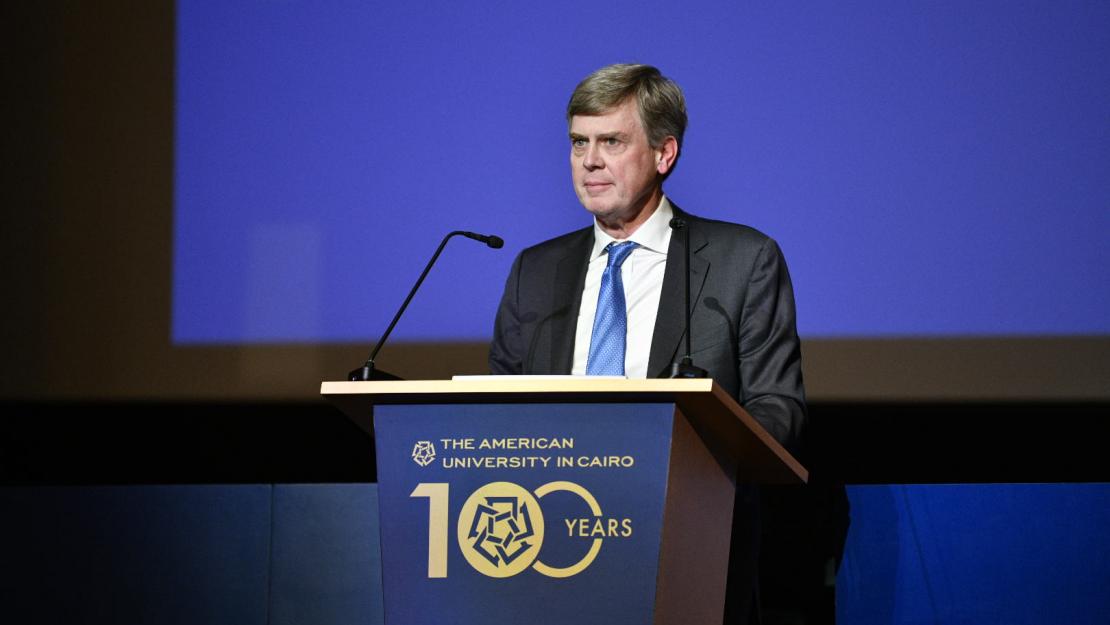 Richard Bartlett, chairman of AUC's Board of Trustees, at the podium
By
Claire Davenport

Saturday, February 9, 2019, marks the date of AUC's centennial year, and now, also commemorates the inauguration of the University’s new Tahrir Cultural Center (TCC). With a ceremony hosted in the renovated Ewart Memorial Hall, opened with speeches from AUC President Francis Ricciardone; Deputy Minister of Higher Education and Scientific Research Amr Adly; and prominent businessman and investor, Naguib Sawiris, chairman of Orascom Investment Holding; there couldn’t be a more fitting venue or occasion for the center’s inauguration.

AUC's Tahrir Cultural Center will serve as the setting for a wide variety of cultural and artistic events, including live dance, theatrical and musical performances, book clubs, movie screenings, conferences and art displays, such as the current exhibits Bint al-Nil by Sherin Guirguis and When Dreams Call for Silence by former AUC professor Huda Lutfi. The center will be fully owned, operated and programmed by AUC, and the Tahrir Square campus will simultaneously continue to host University-related professional and academic arts programs, along with public lectures and seminars.

The construction and development of the Tahrir Cultural Center have been funded and supported by Sawiris, a longtime supporter of cultural and educational institutions in Egypt. President Ricciardone described Sawiris as “passionate about giving back to Egypt, [and] giving generously with purpose and impact.”

During the TCC’s inauguration, Sawiris noted that “art and cultural activities are key to positive transformations in the Egyptian community. ... I am pleased to support the establishment of the TCC that will serve as a dynamic platform for cultural exchanges for both Egyptians and expats. I believe that it will mark the beginning of another exceptional centennial for AUC.”

Sawiris envisions the TCC as a place where young people could get exposed to a range of art forms and receive encouragement toward their own creative expression. As he stated earlier this year, “I am a believer in the power of arts and culture to transform communities.”

President Ricciardone believes that the establishment of this center will mark a new chapter in AUC’s history.

“Today, Egypt is at a new a renaissance, and AUC is at the heart of this revival … ensuring the best minds of the region are equipped with the education they need for the lives of service our alumni have always led, and spearheading impactful research to address the most pressing challenges of our time.”

Celebration of the Past, Vision for the Future

The TCC is at once the culmination of 100 years of AUC, and simultaneously, a glimpse into its future. Throughout its history, the University has continually strived to connect with the world outside its arched walls, actively contributing to Cairo and the Egyptian community at large. Now, the Tahrir Cultural Center will serve as an evolving inspiration for future generations of AUCians.

"Throughout its long history, AUC has experienced many excellent phases," expressed Deputy Minister Adly. "Since its inception in 1919 and its developed performance over the years, it is considered a perfect example of an academic institution [that] is mainly concerned with society."

“We are dedicated to reviving Egypt’s place as a regional fountainhead of arts and culture through the establishment of AUC’s Tahrir Cultural Center,” noted President Francis Ricciardone, explaining how the center’s mission will be to stimulate intellectual exchange and serve as a cultural hub for the greater community. “Once complete, AUC’s Tahrir Cultural Center will be a centerpiece of downtown Cairo -- the beating heart of culture in the Arab world.”

Soon, there will be opportunities to support the TCC through a Friends of AUC’s Tahrir Cultural Center initiative. For now, take the opportunity to walk through the lush gardens and galleries so you can see the vision come alive for yourself. These current installations and the refurbished campus are just teasers of what the TCC will deliver to Cairo in the future.