The Plethora of Passions of AUC Student Ambassador Catherine Yassa 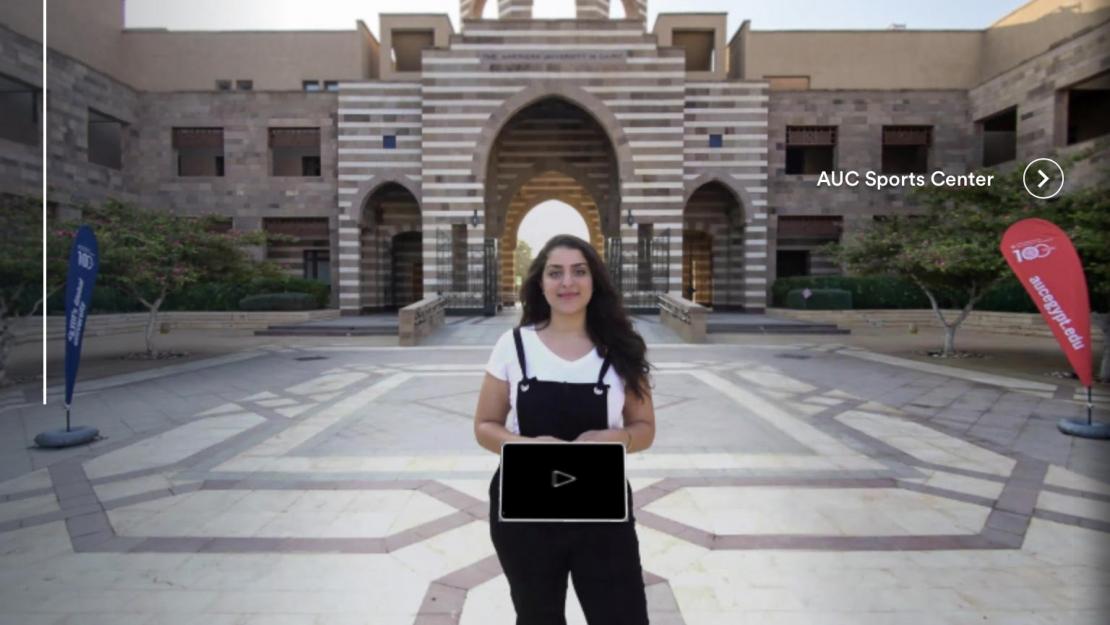 As an admirer of AUC’s rich cultural and academic history, Catherine Yassa, a mathematics graduating senior minoring in creative writing, joined the AUC Student Ambassadors program two years ago to represent the University and its core values. At that time, it was just the second cycle of the program.

Yassa was wholeheartedly keen on communicating AUC’s global impact to its different stakeholders while investing in networking with as many community members as possible. Since then, she has built connections with high-profile individuals in the politics, arts and higher education industries, among others. Representing the student body in accreditation meetings with the National Authority for Quality Assurance and Accreditation of Education in Egypt (NAQAAE), in particular, is among her cherished memories of being a Student Ambassador.

“Being a Student Ambassador taught me confidence, poise and adaptability. It’s extremely humbling how much I’ve grown since I’ve joined the program,” said Yassa. “I’m also lucky I get to work with such a brilliant team.”

Most recently, AUC introduced a virtual online 360-degrees tour of the New Cairo campus, meant to support international students in touring the campus firsthand before physically arriving to Cairo. When it was launched, AUC’s Student Ambassadors were selected to showcase the campus through their eyes, intertwined with their relative experiences.

“The whole experience was interesting, to say the least. Our team worked tirelessly over the summer to create a worthy substitute for in-person tours before orientation,” reflected Yassa. “Preparation alone took several weeks - from an updated tour narrative and working with peer leaders to figuring out how to engage freshmen through Zoom.”

While the process was challenging, the results were overwhelmingly impressive and fulfilling. “There’s no question that the New Cairo campus is stunning. Even though most students had never seen it before, the intricacies of its design and the lush greenery shine through any digital screen,” stressed Yassa. “Of course, it’s not as good as the ‘real-thing,’ but freshmen were undeterred. Once the world returns to normal, I’m really excited for them to experience the campus and what it means to be a full-fledged AUCian!”

Student Ambassadors don’t only provide distinguished guests with tours; share an overview of AUC’s mission, history and achievements; and support the community by being hosts to AUC-organized conferences. They also acquire competitive skills, including leadership, self-reliance top-notch public communication. To ensure they’re equipped for these significant responsibilities, they’re trained by prominent instructors to guarantee the highest standards.

Yassa is the youngest of three sisters and grew up in a family that celebrated individuality. Her parents were always keen on sparking her and her sisters’ curiosity and keeping their imaginations alight. With that, exploration and inquisitiveness were always present in her family, and bringing together distinct fields such as music, science, and arts, were far from unordinary.

Growing up with vivid memories of “ABBA” and “The Carpenters” crooning softly in her home’s background, Yassa embraced her parent’s cross-disciplinary learning environment until she uniquely blended mathematics and writing in her studies today. This is in addition to her passion for sustainability along with astronomy and space. At AUC, she found herself immersed in a variety of resources that enabled her to follow her “kaleidoscope of passions,” as she describes it.

Pursuing her excitement for astronomy and space, Yassa had recently spoken about the newest SpaceX Falcon Rocket Technology to 1,000+ attendees as part of the annual Astronomy Club Conference. Also, uniting with AUC’s sustainable development efforts, she worked on several sustainability projects at the Center for Applied Research on the Environment and Sustainability (CARES) and developed and presented research on renewable energy solutions to aid Egyptian farmers.

What’s more, when it comes to writing, Yassa had many of her creative works published, from articles on student health and research on how greed shapes modern humanity, to a short murder-comedy play for The Author’s Challenge at AUC. Notably, it was through this very eight-page literary endeavor that won over the judges that she traveled to Paris last summer to study film and cinema, all sponsored by AUC.

Despite the current testing times, Yassa holds on to an optimistic view of the future, believing that innovation will come to the rescue. “There’s so much new technology being developed, which intersects with everything I’ve pursued throughout my 23 years of living,” she enthusiastically said. “As such, I can’t wait to be at the forefront of this new wave of creativity and innovation –– a dream AUC has empowered me to pursue.”