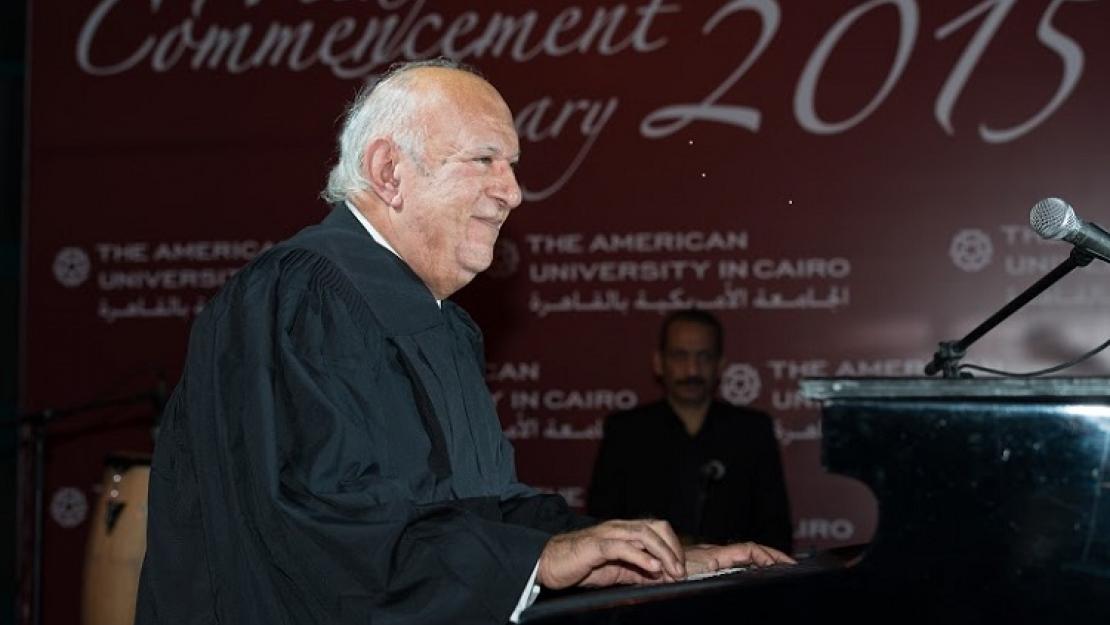 Instead of the traditional keynote speech, students and parents at the undergraduate commencement ceremony enjoyed a dynamic performance by the Egyptian pianist and composer, Omar Khairat, who received an honorary doctorate in fine arts from the University.

AUC President Lisa Anderson drew parallels between the collegiate journey of this group of graduates and how Khairat constructs a piece of music. "An AUC education is an exercise in composition, in creating a single unified being from diverse elements, single notes, varied instruments, multiple traditions,” she said. “As each student writes his own history and creates a new self and a unique biography, he is an artist, composing his own life."

AUC Provost Mahmoud El-Gamal also praised Khairat’s ability to combine diverse musical instruments and traditions, describing his work as one that “weaves Eastern and Western styles together in inventive and inspiring music."

A total of 409 bachelor’s degrees were awarded at the undergraduate commencement, and distinguished students were recognized for their achievements. The President's Cup and Mohamen El Beleidy Acadamic Award, both presented to students who rank highest in the graduating class, went to five students with a 4.0 grade point average: Safeya Zeitoun, Sandra Boutros, Soha Saleh, Yehia Saleh and Mohamed Shehata. The Parents Association Cup, presented to a student who has demonstrated excellence in academic achievement and also student activities, was awarded to Sherine Hammam, who graduated with a bachelor's degree in integrated marketing communication. Amr Seifeldin was presented the Student Government Cup and also won the Ahmed El Mehallawi Family Award for academic excellence and contribution to extracurricular activities. Safeya Zeitoun was honored with the Nadia Younes Award for Public and Humanitarian Service, and Omar El Maarry won the Omar Mohsen Athletic Achievement Cup. The Dr. Abdel Rahman El Sawy Award was presented to Maged Atef for being the student with the highest grade point average in the engineering department who has been a Public School Scholarship recipient.

“This class has seen more change in their short time as university students than most of us see in a lifetime — and they too have changed, growing from promising children to accomplished adults before our eyes,” said President Lisa Anderson. “They have learned — at AUC and in the streets and cafes of Cairo, the living rooms of their families and the chat rooms of their friends — how to express their opinions, argue, imagine, advocate, learn, change, compromise when it makes sense and hold fast when necessary. They have learned to have standards for themselves, to sharpen their ambitions, for themselves and their country, and to persevere. No AUC graduate thinks it is all easy, no AUC graduate expects not to work hard, no AUC graduate is complacent, satisfied, willing to settle. And that is as it should be.”

At the graduate commencement, where 187 degrees were awarded, Anderson acknowledged the achievements of the two PhD candidates, Dalia Nakhla and Mohamed El Zayat, who both graduated with a PhD in engineering, with a specialization in environmental engineering.

Neveen El Tahri, chair of Delta Shield for Investment who cemented herself as one of the most powerful businesswomen in the Arab world and the first female to sit on the board of the Egyptian Stock Exchange, was the keynote speaker at the graduate ceremony.

She iterated the significance of setting priorities in life, where family comes first. “I have always been very clear as to my family being my priority, amidst this working career,” she affirmed. “It was because of having put them as the priority that I got their full support and backing, and I would have never gotten to where I am if they hadn’t supported me along the way. I have never missed a school play, a parents' meeting or throwing a big birthday party, where we all sit together, prepare and, not only that, they had to listen to my business stories every day [when] I came home, as equally as I had to listen to their day at school.” To listen to El Tahri's full speech,click here.