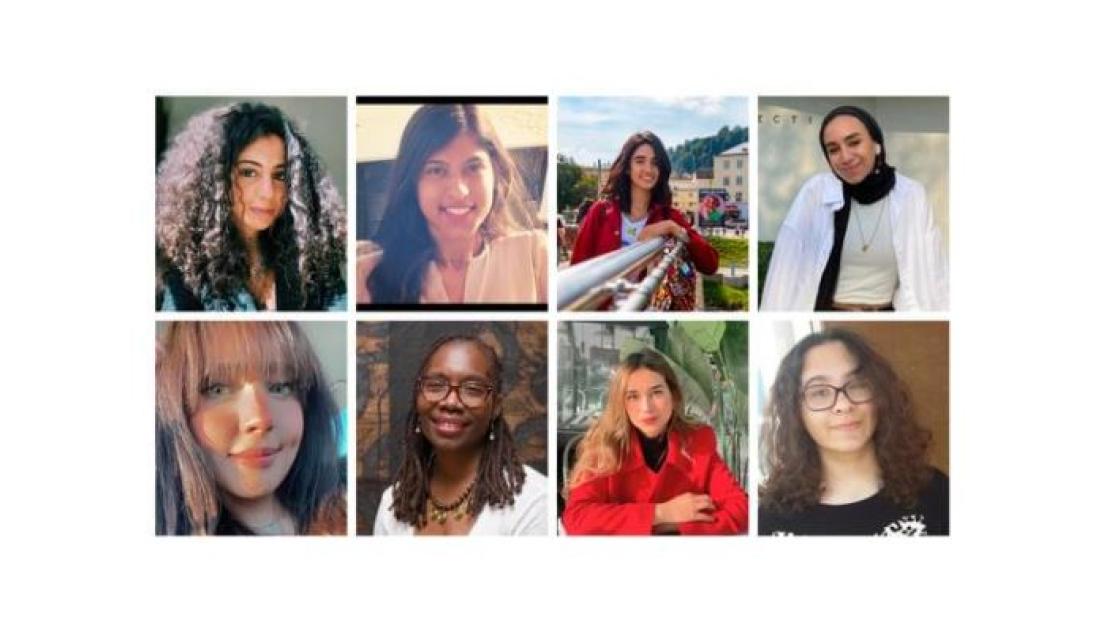 From heartfelt documentaries and compelling podcasts, to captivating audio features that transport you back in time, creative productions by eight AUCians took home 13 awards at this year’s Broadcast Education Association (BEA)’s Festival of Media Arts.

The prestigious BEA is one of the top three international conferences in the field of media and communication. The wins were among hundreds of submissions from all around the world across the different festival categories.

Leading the charge with five awards is Kim Fox, professor of practice in AUC’s Department of Journalism and Mass Communication. Fox excelled this year by becoming the first to win Best of Festival in two different categories.

She received the awards for episodes of her acclaimed podcast, Ehky Ya Masr (Tell Your Story Egypt), a narrative nonfiction podcast about life in Cairo. The winning submissions, How Egypt's Water Crisis Impacts Food Production and The Syrian Shawarma Takeover, won Best of Competition in their respective categories, qualifying them eligible for the Best of Festival award.

"I'm quite excited to make BEA history by winning two Best of Festival Awards in the same year,” she exclaimed. “It would be a huge achievement to win one, but I'm astounded at winning two! I don't think people have enough respect for how challenging it is to produce narrative nonfiction content and also carrying a full teaching load ... during COVID.”

Abouelnasr’s feature, "The Musical Magic and Scorched Legacy of Cairo's Khedivial Royal Opera House v2," delivers the history and significance of the old Cairo Opera House, particularly focusing on the devastation caused by its burning in 1971.

“I interviewed one of my mom's friends whose late father performed there as an opera singer,” she said. “He shared the memories of his father on the day [of the burning] and provided insight on just how much the loss of the Opera House felt like losing a second home to the performers.”

Having previously won Best of Show at BEA’s On-Location Creative Competition for the original version of the feature, winning another BEA award means a lot for Abouelnasr.

“It’s definitely a confidence booster,” she said. “What I’ve really enjoyed the most is getting to speak with family members and friends about [the topic], as well as being exposed to other projects from AUC and other universities. I've also developed a love for producing audio myself, rather than just loving to listen to podcasts and audio features. So while I'm not working on anything new topic-wise at the moment, I have ideas in mind that I would definitely like to develop.”

Saleh’s feature, “Freedom and Fear: Political Parties in Egypt,” won first place in the Student Audio Category. The feature explores Saleh’s aunt’s experience in political parties in Egypt, a topic she had been interested in for some time. Saleh went off theme for this project, but she reported that Fox was nevertheless supportive.

“I’m so glad that [my work] was recognized and that Professor Kim took a chance on me and submitted my feature to the BEA,” Saleh said, adding that while her audio feature is just eight minutes long, countless hours and late nights went into its creation.

All women received awards for documentary films created in their Television and Digital Journalism capstone course, under the supervision of Hussein Amin, director of the center and capstone course professor.

“It makes me very proud to see graduate students of the Kamal Adham Center for Television and Digital Journalism win international awards from one of the most prestigious student television production competitions in the world,” Amin said.

Magdy, who won first place in the Television News Category, covered a perplexing ritual in her film Besha’a, which is Arabic for “Licking Fire” — a method used to detect liars involving a scorching hot spoon.

“I was told that in Sarabyoum, a city in Ismailia, there are bedouins who implement this ritual and people come from all over the world to them when they’re accused of a crime in order to determine innocence,” Magdy said.

As uncommon and unpleasant as the topic may seem, Magdy was drawn to it out of curiosity and a desire to understand the myths and superstitions still believed today, she reported. Clearly, she was not alone in this yearning, as was confirmed when she got wind of the award.

“I couldn’t believe it,” Magdy recalled. “I honestly burst into tears, and was full of gratitude.”

She is particularly grateful for Amin and the rest of the staff at the Adham Center. “They were like family to me. I think that they deserve an award as well, for making us reach our dreams.”

Michel explained that the two films are very close to her heart, as they were shot in Elbarsha, a village close to her hometown in Upper Egypt, Mallawy.

“I left Mallawy more than a decade ago thinking that there was no way to become successful in such a place that lacks opportunities, good education and social support,” she said. “I wouldn't have imagined that my breakthrough would take place only when I came back to the place where I thought I would never achieve any of my dreams.”

Following the theme of women, two of the Adham Center winners, Maged and Shaker, created films covering the lives of two groups of determined and self-sufficient women living in rural parts of Egypt.

For her story, Dronka Guardians, which won an Award of Excellence in the Short-Form Documentary Category, Maged traveled south of Cairo to a monastery near Assiut. There, she interviewed the female devotees of the monastery, documenting their daily lives and the challenges they face for taking on nontraditional roles in society.

Each morning, the devotees punch the clock as butchers, truck drivers and other professions usually performed by men, after which they retire for prayer and other devout activities.

Maged said: “These are women who are working, who are strong. They have the ability to be equal” – even in Upper Egypt.”

“I’ve always been inspired by working with women,” Maged explained. “Unleashing the untold stories of women is my main drive as an independent filmmaker. They are my inspiration and passion.”

Photography from Maged’s film is currently on display at B'sarya for Arts art space in Alexandria, in celebration of International Women’s Day.

Shaker’s documentary, Women of El-Ezba, lends a view into the lives of women living in a coastal fishing city near the Damietta Branch, a distributary of the Nile Delta. While their husbands are out at sea, sometimes for months, the women are discouraged from leaving the house to find work. In order to keep supporting their families, they have to get creative.

“The women challenged themselves and started their own small projects, despite the conservative community they are living in,” Shaker said. “They empower one another by teaching each other new skills while their husbands are away.”

Some women create crafts from recycled materials, while others grow and sell plants from their backyards. The thread connecting all of the women is a spirit of entrepreneurship and the courage to dream.

Like Maged, Shaker too is passionate about featuring the success of women, and winning the Award of Excellence in the Short-Form Documentary Category is a “longtime dream come true,” she said. “Since I was an undergraduate, I have wanted to win this prize. Filming in this area was quite challenging, so I am happy and proud that it paid off in the end.”

Finally, Mamdouh won an Award of Excellence in the Short-Form Documentary Category for her film, Heba Wagdy-Osteogenesis Imperfecta. She experienced both sadness and joy while working on her project, which follows the life of Heba Wagdy, a woman living with a rare disease that causes brittle bones and vision problems.

“While I was in the montage stage, I cried a lot for Heba and had to stop for a bit,” she said. “However, I felt compelled to continue and show the world her patience and contentment.”

Mamdouh reported that after a screening of her film, the lights in the theater came on and she was met with an audience clapping with tears in their eyes. While she appreciates the praise, her hope remains that the film will inspire viewers to help Heba and others like her.

Deeply proud of his students and their work, Amin concluded: “This recognition is not limited to the Adham Center or the School of Global Affairs and Public Policy only — it extends to AUC and Egypt in general.”