Economics Senior: Liberal Arts is the Road to Self-Discovery 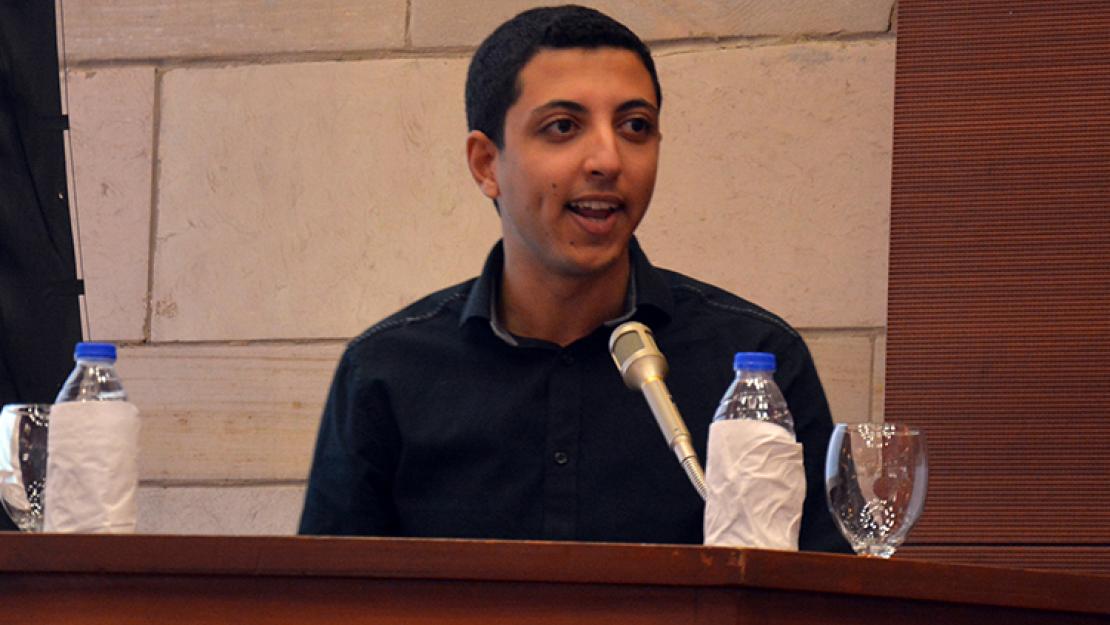 For Ahmed Sharafeldin, a graduating senior and recipient of the May ‘87 and Ahmed Heikal Endowed Public School Scholarship, AUC's liberal arts education has allowed him to discover his greatest passion: economics. Although Sharafeldin now has plans to work in consulting, finance and, eventually, politics after graduation, he did not always have such a clearly defined path.

“My family wanted me to become an engineer, but I always knew that I didn’t want to do that,” said Sharafeldin. “However, I was not so sure what I wanted to study. I’ve long had an interest in public affairs since 2011 when, as I was simultaneously going from being a teenager to an adult, I started to take much more interest in what was happening in Egypt and the world around me.”

Despite these inclinations, Sharafeldin did not immediately find his passion upon entering AUC, yet the opportunity for academic and intellectual exploration quickly allowed him to do so.  “During my first semester, I studied engineering," he recalled. "I did well, but I didn’t love it. Then, during my second semester, I decided to change majors. The Core Curriculum and liberal arts education allowed me to take two political science classes and two economics classes, and I decided immediately that economics was definitely the thing for me.”

As Sharafeldin noted, the liberty and encouragement he received in developing his academic interests “wouldn't have been possible at any other university in the country except AUC. The liberal arts education helped me know what I am really passionate about,” he affirmed.

An intellectually curious student, Sharafeldin has a love for philosophy, reading and, thanks to the opportunities he was afforded at AUC, classical music. He has taken a variety of classes outside of his major, citing History of Western Music as one of his favorites. He also had the opportunity to participate in –– and lead –– numerous student organizations. “I joined the Arabic section of AUC Times magazine, and it was really an instantly perfect fit," he said. "I really liked the culture and [being with] other students, who have very similar interests. I eventually became the managing editor of the section. However, by my junior year, I realized that I also want to do something related to my major."

Sharafeldin then joined the Finance and Economics Club, which he now heads. "It’s an academic club, so we have a range of activities, from networking sessions with job professionals in the field to national research competitions to different finance games. We’ve also recently been working on a publication,” said Sharafeldin, who also helped organize the first Annual Conference of Egyptian Economics Students [ACEES], which aims at fostering undergraduate economic research.

Building on a passion for economics that he first developed at AUC, Sharafeldin also studied abroad at the University of Chicago for a year through the Sawiris Scholars Exchange Program, an experience that allowed him to take classes with and learn directly from some of the world’s leading economists.

Moving forward, Sharafeldin hopes to work at a consulting firm and then obtain his Master of Business Administration, eventually focusing his professional career on finance or investing. He is particular interested in private equity, a field in which his scholarship donor, Citadel Capital Chairman and Founder Ahmed Heikal, is coincidentally a regional leader. “It’s a sign!” said Sharafeldin, as an optimistic smile emerged on his face.

Despite this particular focus, however, Sharafeldin emphasized that “as I graduate this fall with a degree in economics, I'm not just going into the world as this young man in a suit with knowledge of supply, demand and financial investments. I'm also an aspiring fiction writer. I'm also a classical music connoisseur, who makes sure he attends the Cairo Orchestra concerts every Saturday night, ever since being inspired by a wonderful professor and playing for AUC's classical guitar ensemble. I'm also a keen film follower, who became a novice critic of modern cinema after he took an introduction to film class as part of his Core Curriculum requirements."

As Sharafeldin reiterated time and time again, none of these important self-discoveries would have been possible without the liberal arts education he received at AUC.

For incoming undergraduates who are struggling to decide their major, Sharafeldin advises, “Use your freshman year to take advantage of the Core Curriculum, investigate your options, get in touch with seniors for advice and talk to the Career Center about the job prospects of what you’re interested in. Make the freshman year one of exploration; don’t just dive into one thing immediately.”

Even to say that Ahmed Sharafeldin has taken full advantage of his time at AUC is an understatement. From economics to fiction writing and Arabic literature to classical music, he has cultivated a plethora of interests that will, without a doubt, ensure his future success. “I feel so lucky,” he said. “I feel like I’ve done everything I could possibly do as an undergraduate student, and now I’m just looking forward to what’s next.”