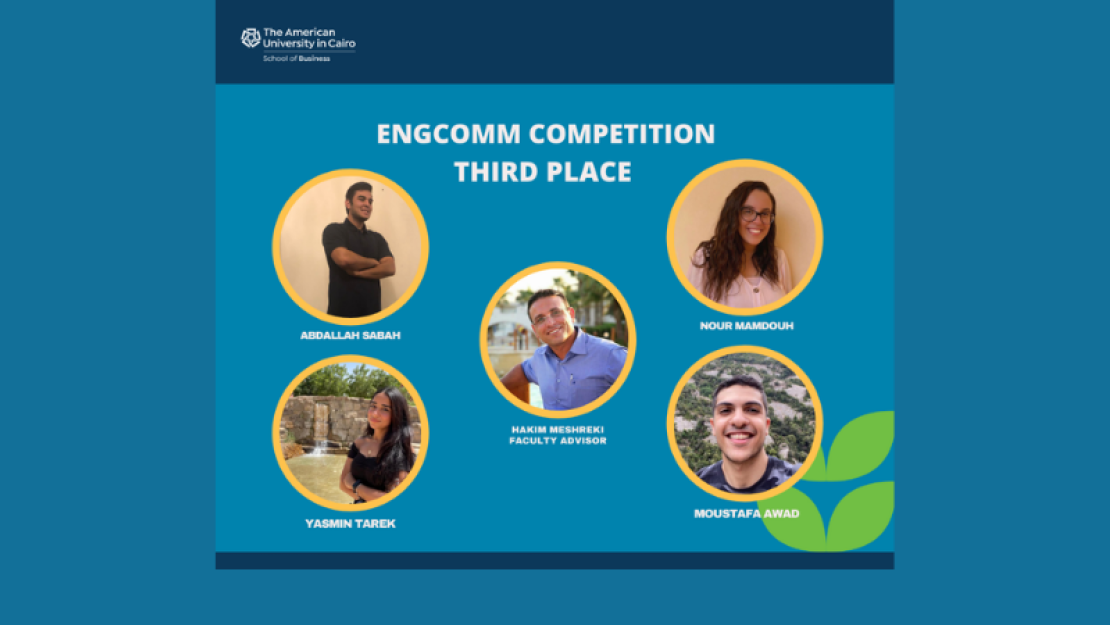 The winning team –– made up of students Abdallah Sabah, Yasmin Tarek, Moustafa Awad and Nourhan Nada and led by Assistant Professor Hakim Meshreki –– first competed against five teams from AUC in the qualifying round then against 16 teams from prominent academic institutions worldwide in the final round.

“This is the second time for me to take part in EngComm, albeit this time, the competition was fully online,” said Awad. “Despite not traveling, the competition was still as engaging, and I really enjoyed competing against top universities around the world once again. I’d like to give a shoutout to Dr. Hakim, who continuously produces winning teams in this competition.”

Established in 2013, the Canada-based Engineering Commerce Case Competition brings together students with a technical background in engineering and those in interactive fields such as business and economics. During this year’s final competition, the AUC students had to solve two case studies, each six hours long, as well as a 12-hour case study.

“My favorite case study was the 12-hour case, which centered around the development of aerospace vehicles and its implementation within the Canadian community,” said Tarek. “We designed a VTOL [vertical take-off and landing craft] and worked together to ensure its success for various applications ”

The competition took months of preparation, with the students practicing cases from previous years and meeting with former AUC contestants. “We spent more than 18 hours a week solving cases, with a total of over 100 hours, but the twist was that they were consecutive,” Tarek added.

For the students, the experience was both educational and entertaining.

“It was truly riveting,” said Nada, echoing the same sentiment. “I learned so much throughout the entire journey, from the months of training to the actual competition. I got to engage in conversation with individuals of diverse backgrounds. I’m also glad I got to work with Professor Hakim and my teammates. It was a fruitful experience.”

“I am so honored to have experienced such a well-rounded and extensive competition as I can wholeheartedly say who I am today is not the same as when I first embarked on this journey,” said Tarek. “From the long, long hours of case study practice with my team members to the professional development training and feedback sessions provided by Dr. Hakim and Dr. [Ahmed] Tolba, I have learned so much about the importance of interdisciplinary connectivity. This experience taught me valuable lessons, such as the importance of diversity within a team and problem-solving frameworks within a professional setting. The competition encompassed life lessons behind case study practices, and I know it will benefit me for years to come.”