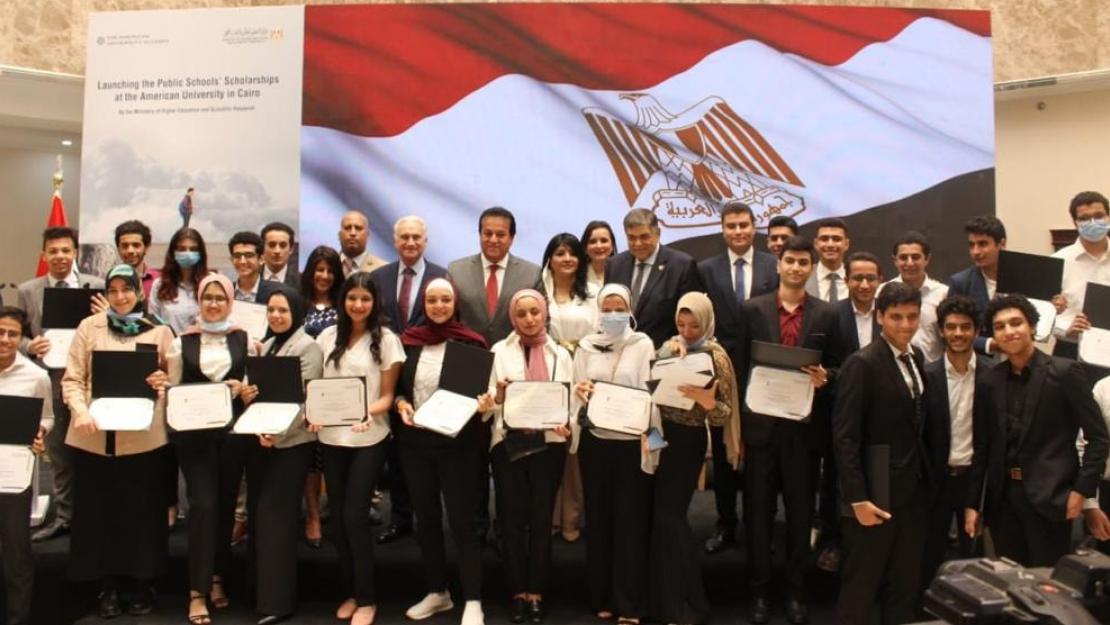 Recently, AUC awarded 30 full-tuition scholarships to public school students within the framework of the Memorandum of Understanding signed between AUC and Egypt's Ministry of Higher Education and Scientific Research earlier this year.

This academic year, 20 scholarships were awarded in sciences and engineering, six in arts and four to outstanding students with special needs in cooperation with the National Council for Persons with Disabilities. Among the scholarship recipients, eight hold STEM [Science, Technology, Engineering and Mathematics] certificates, 13 have completed their scientific high school diplomas and five have completed their high school diplomas (arts section).

During the event, President Ricciardone expressed his happiness with the cooperation between AUC and the ministry, with AUC being an integral part of Egypt’s higher education landscape. He wished continued success for the scholarship students.

Likewise, Minister Abdel-Ghaffar asserted the government’s keenness to maintain the cooperation between AUC and Egyptian educational institutions, pointing to the pivotal role the University plays in serving the Egyptian community at the research and scientific level. Abdel-Ghaffar also affirmed that the collaboration between the ministry and AUC will continue to work on providing better opportunities for Egyptian students and foster a culture of leadership and lifelong learning.

The Memorandum of Understanding, an amendment to the protocol signed between AUC’s Board of Trustees and the Egyptian government concerning AUC’s status and organization back in 1975,  entailed that AUC would annually allocate 30 full-tuition scholarships to the government for Egyptian public school students who wish to pursue their undergraduate studies at AUC, in accordance with the University’s admission requirements. The Ministry of Higher Education and Scientific Research nominates the students for the scholarships each year.

Mostly recently, Egyptian President Abdel Fattah El-Sisi issued Decree No. 426 for 2020, approving the Memorandum of Understanding between the government of the Arab Republic of Egypt and AUC'S Board of Trustees regarding the amendment of Article VI of the protocol signed between the two parties in 1975 regarding the status and organization of AUC signed in May of this year.