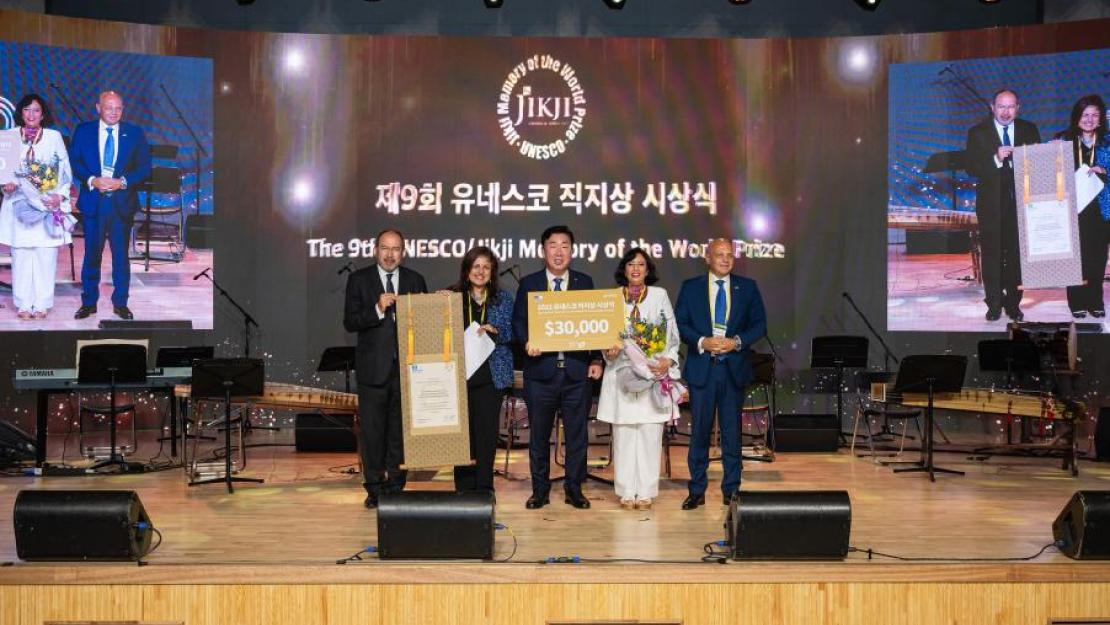 The prize honors an individual or institution for their contributions toward preserving and making accessible recorded history, known as “documentary heritage” — which is the quintessential function of the RBSCL at AUC.

"AUC’s LLT is deeply honored to be the recipient of the Jikji Prize, which recognizes the obligation to seek, find and nurture the records of all groups, people and institutions,  creating a ripple effect globally,” said Heba Sayed, planning, assessment and business development director of LLT.

Founded in 1992, the RBSCL has preserved an outstanding number of records and artifacts, making them accessible to AUCians and the public alike. The library also boasts a vast digital collection of videos, photographs, maps and more that anyone can access free of charge.

Working alongside the AUC Digitization Center and the Conservation Lab, the library’s team is currently tackling the task of digitizing thousands of items of documentary heritage to share with the world.

"Receiving the prize highlights the spirit of teamwork that's at the heart of the Rare Books and Special Collections Library and AUC Libraries and Learning Technologies,” said Stephen Urgola, University archivist and associate dean.

Urgola expressed his gratefulness for all friends of the library. “This recognition was made possible through the efforts of our current and past librarians, staff, and library leaders, support from the AUC community, and partners beyond the University like donors and researchers, who all make it possible to preserve and celebrate the documentary heritage of Egypt and the wider region," he said.

Drawing inspiration from the accolade, Sayed affirmed that “RBSCL will continue to work arduously to identify, keep, preserve and share the records and the stories of those who have contributed to changing the world.”

Hassan Fathy was the first green architect in the region, recognized by UNESCO and featured in many exhibits around the world for his significant contributions to the development of sustainable architecture. The library holds papers, projects, and artifacts of this Egyptian architect, as well as his documentation of Nubian architecture before the construction of the Aswan High Dam.

The library’s Van-Leo Photographic Collection captures the lifeworks of this important photographer who documented, with his portraiture work, the life and the development of the region, and whose work included many Hollywood stars.  This collection has been showcased by AUC’s 3D exhibition in his memorial His images have also been featured outside Egypt as well, as at the Brighton Photo Biennale in England (2006) and the New Museum in New York (2014).

There is also a collection that documents women’s history and role in Egypt's modernization movements.  Preeminent here are the personal papers of Huda Shaarawi, pioneer for women's rights in Egypt in the first half of the 20th century. Also featured are the notable mid-century activist, Doria Shafik, and NGO leader Aziza Hussein.

Another important and critical collection is on the Arab Spring in Egypt in 2011. The “University on the Square” collection documents Egypt's 21st Century Revolution. This digital collection features oral histories, photographs, video recordings and visual art that document the January 25th Revolution, preserving the history of the 18 Days in Egypt and beyond by collecting content from activists, participants, and observers from the American University in Cairo as well as members of the larger Egyptian and global communities.

The RBSCL is working on the Arabic Collections Online (ACO) Project, led by NYU Abu Dhabi. ACO is a public digital library of public-domain Arabic language content providing access to 14,183 volumes across 8,675 subjects.

Watch a documentary on the library here.