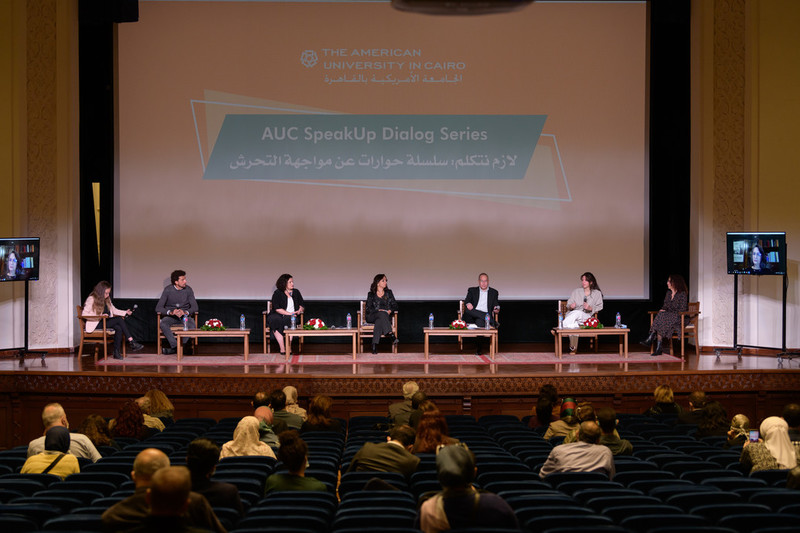 As part of its AUCSpeakUp initiative, The American University in Cairo (AUC) launched last Thursday AUC SpeakUp Dialog Series in Ewart Hall, Tahrir Square Campus. The series is held in partnership with several institutions and prominent influencers to participate in the national conversation on sexual harassment to raise awareness of this critical issue. The series, which opened with a dialog on “How can we combat harassment and why should we care?” features a set of conversations around key topics ranging from social norms and portrayals of gender in film to safety of public spaces, workplaces, and college campuses.

AUC formed an Advisory Board of distinguished leaders to help shape the topics, speakers, sequence, and direction of the series. The board members are Maya Morsy ’95, president of Egypt’s National Council for Women; Hisham El-Khazindar ’96, co-founder and managing director of Qalaa Holdings and AUC trustee; Christine Arab, UN Women Egypt country representative; Hoda Elsadda, professor of English and comparative literature at Cairo University; Rabab El Mahdi ’96, ’98, associate professor and chair of AUC’s Department of Political Science; Nadeen Ashraf, AUC student and founder of Assault Police; and Omar Samra ’00, adventurer, entrepreneur and motivational speaker. The first of the series was moderated by Farah Shash ’09 ’12, Community Psychologist and co-founder of the Community Hub.

In his welcome speech, AUC President Francis Ricciardone emphasized that the role of leading higher education institutions such as AUC is paramount in raising awareness and addressing the great problems of our time. “At AUC, we started the SpeakUp initiative this summer, which has put structural changes at our university,” he said. “AUC has a zero-tolerance policy for sexual harassment, “Anti-Harassment and Non-Discrimination Policy,” and dedicates an online reporting system that enables any person who experienced harassment or discrimination to report a complaint,”

Ricciardone explained that AUC’s latest measures to combat sexual harassment included the changing of the Title IX Office to the Office of Institutional Equity, to report directly to the Office of the President, and to receive complaints from all members of AUC community. “It is also now mandatory that every community member receives an online training designed to raise awareness of sexual harassment.”

Maya Morsy addressed the need to continue combating sexual harassment, spreading awareness, encouraging women and girls to report, and stressing that the constitution and Egyptian law protect women’s rights. “We are working hard to raise awareness in schools, universities, and nurseries, in cooperation with the civil society. We have 22 units to combat violence against women in universities, and we thank AUC for having a similar unit,” she said, adding that the NCW is also fully prepared to create an environment to foster cooperation between all Egyptian universities.

Hoda Elsadda, one of the founders of the Anti-Harassment Unit at Cairo University in 2014, said: “One of the most important reasons behind this unit’s success was its establishment organically by academics in cooperation with the civil society groups and students. Such a foundation made it an exemplary unit in Egyptian universities.”

Elsadda added: “The Dialog Series is an occasion to educate the AUC community and the general public about the various issues and challenges linked to sexual harassment: the magnitude of the problem, the social, cultural, as well as legal constraints that deter women from reporting incidents of sexual harassment in the workplace and in public spaces, the stigma surrounding sexual harassment and how to address it, and sharing and comparing institutional experiences and policies on dealing with sexual harassment.”

Nadeen Ashraf, who launched Assault Police Instagram account that reinvigorated Egypt’s #MeToo movement, explained how she found that social media was an efficient tool in fighting sexual harassment. “I noticed with the first story I shared that the survivors of harassment realized that they have similar experiences and that they were not the problem, but the real problem was the harassers and society.” Ashraf explained that she never imagined that others would react, nor did she imagine that there would be such a response from the National Council for Women and the police and that the harassers could be punished.

Rabab Al-Mahdi emphasized the need for integration between the state and civil society in addressing a societal issue such as harassment. “We have had important initiatives since 2005, and the accumulation of these initiatives is an important factor in combating harassment.” Al-Mahdi stressed the importance of such integration without incriminating the victim at the societal or institutional level.

Omar Samra discussed how important it is to create discourse, a place where those on the opposite sides of the argument can come together and converse in a healthy, constructive manner. “We are at a critical stage that requires us to be part of this initiative and to be responsible, as silence is almost a crime, in my personal opinion. The development of any country lies in how it deals with women’s issues, and we must all join hands to ensure zero-tolerance for harassment,” he added.

Hisham Al-Khazindar argued that we must look at the developmental aspect of combating harassment and violence against women. He stressed that no country could advance without empowering half of its society. He explained that universities, including AUC, have an essential educational role in creating the appropriate climate to set the rules and deter harassers, stressing the private sector’s role in setting a good example for institutions.

On the other hand, Christine Arab said that laws are fine and incredibly essential to combat and fight sexual harassment, but a behavior shift is required. “Laws need to be enforced, that means institutions like AUC have to enforce these with rigor, impartiality, and penalty, there has to be justice, that’s when the behavior starts to change.”

Over the next seven months, the Dialogue Series will address several issues related to sexual harassment, including “How are we socialized around gender norms?”, “Portrayals of gender in media and film”, “How do we make public spaces safe for women?”, “Are we safe in cyberspace?”, “Combating harassment on university campuses”, “Safe, inclusive and diverse workspaces”, and “Legal framework and violence against women.”