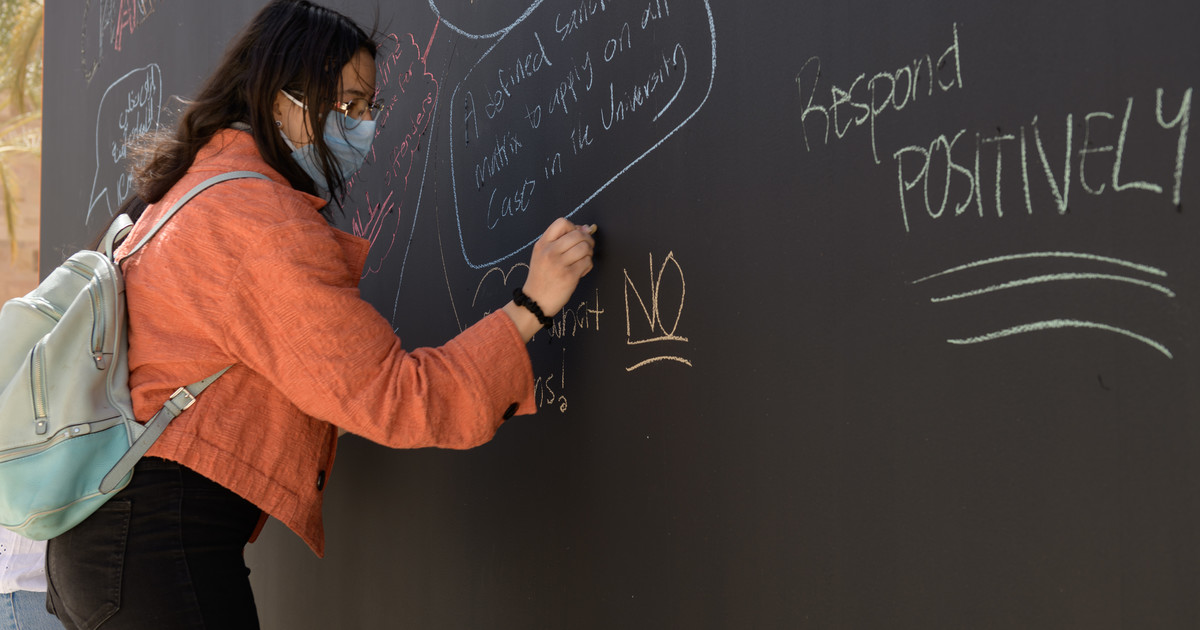 Featuring professionals from anti-harassment offices at local and international universities and students, “Universities Unite” panel was moderated by Sunanda Holmes, general counsel and chief compliance officer at AUC, and Youssef Hashem, AUC student and president of The AUC Debate Society. Ain Shams University’s Hend Al-Hilaly, director of the Anti-violence and Harassment Unit, discussed the role of Ain Shams’ unit, which was launched six years ago to enact policy and protect all women on campus.

Osama Madany, dean of the Faculty of Arts at Menoufia University, also discussed the need for empowering students and how complicated sexual harassment is in rural areas.

Reem El-Mograby, director of the Office of Institutional Equity and Title IX coordinator at AUC, discussed the University’s role in combating sexual harassment. She also discussed the recently launched online reporting platform, the ethics helpline, which encourages community members to report any real or potential violation of University policy.

At the discussion titled, “Wait, Is That Harassment?”, several students identified what harassment means to them and ways to address the issue.

Youssef Hashem, president of the student-led organization AUC’s Debate Society and an economics junior with a minor in entrepreneurship, said: “It’s important always to have students involved in any discussion because students are the main stakeholders of any university. We have a problem in the discussion itself because we always attack – we don’t solve. And solving is the most important thing, and this isn’t a mentality we are raised for when it comes to this specific topic. So this is something we need to work on more…We won’t always have a definite solution of course since this isn’t a topic that can be solved in one day – this is something that needs to always be tackled and discussed.”

MySafeUni Day event also included “Msh Zanbek”, a live theatre performance by AUC’s Department of Arts, exploring sexual harassment. Nadia Ezzeldin, a theatre and integrated marketing communication student at AUC, said that the idea behind the play is to showcase people’s feelings about harassment, “to let people know that they’re not alone in this. Theatre isn’t about telling you what or what not to do but raising the issues that not many people talk about and stir conversations.”

Ezzeldin added: “We need to stop normalizing abnormal things. Each individual is powerful in a different way, in different sectors and jobs, and they can do things from their side. Sexual harassment shouldn’t be a taboo topic anymore.”

At the “Wait, Is That Harassment?” discussion, when asked if sexual harassment is a human rights issue, Ezzeldin asked audience members to raise their hands if they were previously harassed, know someone who has been harassed or know someone who was hurt due to harassment. Everyone in the audience raised their hands, and she explained that this shows how it is a human rights issue.

AUC alumni shared their personal experiences and insights on sexual harassment in the Alumni SpeakUp Talks. Omar Samra ’00, adventurer, entrepreneur, and motivational speaker, said there are many ways to get involved, and one of them is just listening, “Listening is the start. And using your voice in your community; I use my platform to discuss topics I care about. It got to a point where I just couldn’t remain silent, I thought something had to be said, I didn’t think enough people were talking about it, I certainly didn’t think enough men were talking about it.”

Gala El Hadidi ’05 ’07, international mezzo-soprano, opened up about her experience with harassment and how she chose to react positively, “Anything that happens without your consent is called harassment, but it is up to you to make the choice to not be a victim.”

She encouraged women to continue to speak up: “I’m asking you to think and reconsider, take control of your emotions… walk straight into that main door and take control of your lives...would you really want to live as a victim all your life? It takes time… it took me ten years to get that thought.”

Tarek El Ebiary ’12, actor, shared his insights on harassment and how his graduation project, “Pantalon Julliet” film, tackled the issue. While Ahmed Alaa Fayed ’13, assistant professor of management and public policy at Nile University, discussed how men need to use their privilege to empower women, make sure they have equal rights, enact equality, and protect them through reporting mechanisms.

Over the following months, AUC SpeakUp Dialog Series will address other issues related to sexual harassment, including "Safe, inclusive and diverse workspaces", and "Legal framework and violence against women."