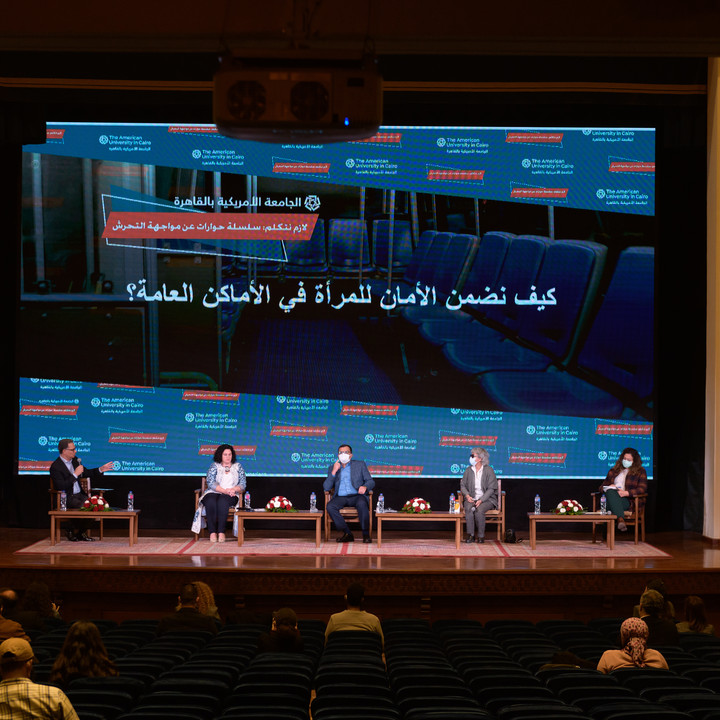 Christine Arab shared results from a multi-country survey conducted in 2017 by UN Women in the Middle East and North Africa. She said: "We found that a range of 40-60 % of women in the region have experienced some form of harassment and about 30-64 % of the men interviewed admitted to having perpetuated harassment."

Hala Shukrallah highlighted that the root of the problem lies deep within society. She recalled how in the 1970s, people in the streets used to stand up against harassment, regardless of any punitive measures, yet "in the late 1970s in Egypt, we faced an ideology that perceived women as a problem in society — one that blamed them for issues like unemployment. This aggression manifested in harassment."

Shukrallah explained that this ideology also perceived women's presence in public spaces as dangerous, and women started to feel such danger. "Gradually, the previous protection women had on the streets diminished, which resulted in them hiding from harassment and choosing not to speak up in fear of more violence. Men even blamed the women who resisted harassment on the streets."

Engy Ghozlan pointed out the critical role that social media played in exposing harassment in public spaces. "In 2005, blogs exposed incidents of mass sexual harassment in downtown Cairo. In 2009, with a group of females we launched HarassMap, an interactive map that shows where girls and women are harassed." As Ghozlan put it, "I chose not to be a victim of harassment but an active member of society fighting it. I feared harassment would turn into a seasonal topic of discussion. We needed to show people that the problem isn't in one place or city... We didn't even have a legal definition of sexual harassment then, and with the help of many volunteers, we aimed to reach people on the street and raise their awareness on harassment."

On the psychological impact of harassment on women and girls, Hani Henry said research shows that those subjected to harassment could suffer from anxiety, stress, depression, post-traumatic stress, and suicidal thoughts. "Because of living as a target, women feel that they are objectified and at times start to blame themselves."

When it comes to families' role in supporting survivors of harassment, Henry explained that unfortunately, some parents don't give their daughters the space to discuss what they went through. "A lot of times, when the victim talks about what she's exposed to, the family sees it as a way of shaming them. This is why we need awareness and empowerment," he added.

Arab added that harassment sometimes results in girls not wanting to use public transport, which could hinder them from going to schools. She stressed the challenge of dealing with the normalization of public harassment in all countries. She said: "between education and enforcement of the law, you get prevention."

Shukrallah added that speaking up about problems like sexual harassment is a form of resistance. "We have now reached the peak of this societal issue. Even if fighting harassment is reflected in the current policies and laws, it hasn't yet reflected on the institutions applying these policies."

In her remarks, Reem El-Mograby, director of the Office of Institutional Equity and Title IX Coordinator at AUC, highlighted AUC’s role in supporting national and global efforts to end sexual harassment, especially on campuses. She said that the Dialog Series is part of the AUC SpeakUp initiative, “which is a comprehensive approach to promote a culture that combats harassment and discrimination. We have launched mandatory online anti-harassment training sessions for AUC’s community members. We have also strengthened the role of the Office of Institutional Equity, which takes serious steps to raise awareness of the “Anti-Harassment and Non-Discrimination Policy,” and the online reporting mechanism and to prevent any harassment or discrimination on campus.”

Over the next months, AUC SpeakUp Dialog Series, launched in November 2020, will address several issues related to sexual harassment, including “Are we safe in cyberspace?”, “Combating harassment on university campuses”, “Safe, inclusive and diverse workspaces”, and “Legal framework and violence against women.”