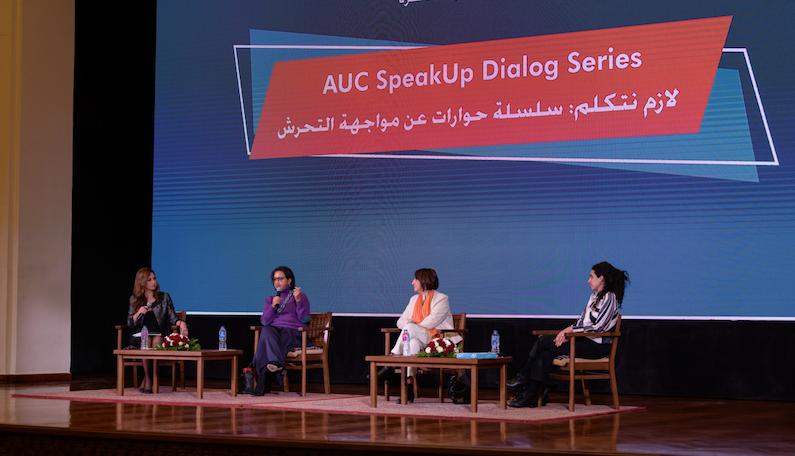 The American University in Cairo (AUC) held yesterday the first session of AUC SpeakUp Dialog series, titled "From the Playground to the Living Room: How Are We Socialized Around Gender Norms?" The session discussed the factors that shape our expectations of each gender and how far back the ideas we've established around gender go. It also explored common gender roles and stereotypes in today's society and how they are formed. AUC SpeakUp Dialog Series aims to raise awareness about sexual harassment as an important social issue and support national and global college campuses' efforts. In yesterday’s session, speakers were Hania Sholkamy '85 '89, anthropologist and associate professor at AUC's Social Research Center; Sara Aziz, founder, and president, Safe Kids; and Fatma Khafagy (MA '77) coordinator, Arab Women Network for Parity and Solidarity (Tha'era). The session was moderated by Samar Negida '11 '14, journalist and anchor.

AUC President, who joined the event virtually, highlighted AUC's important responsibility and role in participating in the national conversation about harassment and supporting it, "While I am proud of AUC's role, it is not something we can be complacent about. At AUC, we have redoubled our efforts on our campus... we have AUC SpeakUp that we have launched this summer to take our own anti-harassment efforts to a new level. Fighting sexual harassment is not a women's issue, but a human rights issue, as it applies to men as well as women, where many need to be educated on the rights of women and protected from bullying and harassment.”

Ricciardone emphasized that AUC has a zero-tolerance policy for sexual harassment, “Anti-Harassment and Non-Discrimination Policy,” and dedicates an online reporting system that enables any person who experienced harassment or discrimination to report a complaint, and also provides mandatory online anti-harassment training sessions to its community members.

Hania Sholkamy also said that harassment is one form of unwanted violence, "it doesn't only happen in the streets, but could happen at home and also between partners."

On the other hand, Sara Aziz also highlighted power harassment, "where one is threatened or persuaded under the pretext of love into accepting harassment.”

The speakers agreed that breaking gender stereotypes in the early years is key to combating harassment. Khafaga pointed out that the roots of harassment also lie in children's upbringing: "many families in rural areas still discriminate between their sons and daughters." She said that bringing up boys who are free to act as they please, while placing severe restrictions on daughters, reinforces their entitlement as they grow up to practice violence against other females."

In many cases that she has witnessed, Aziz said young boys who have been harassed couldn't communicate to their parents what they have experienced. "Due to certain stereotypes in society that reinforce telling young boys, for example, "men don't cry", boys bottle up their feelings and don't share what they go through with their parents," she added.

The pandemic has also had a toll on many victims; as Aziz said, "many found themselves locked in with their abusers." She added that 93% of teenagers and children are victims of their family members, neighbors, and friends.

Khafaga also said that: "no doubt COVID-19 has increased violence against women, especially online, as more people used the internet, violence, and harassment against women increased in the form of blackmail or threats of harm."

Yet Aziz manages to see the glass half full, "while the figures started to increase during COVID-19, there are also a lot of awareness programs, like The National Council for Women latest campaign on Instagram. We need to acknowledge that there was an increase in the level of awareness. Egyptian families are now ready, at least, to listen to their sons and daughters… It became a gift and a blessing rather than just a difficulty."

Harsher punishment for sexual assault crimes is a must, Khafaga said. She added that the process to report harassment cases should be easier for women and girls, especially since there are no accurate numbers of the actual cases of harassment. She also pointed out the need to increase the helplines for victims of harassment and the safe houses for abuse victims, "for every 100,000 people, there should be a safe house for women." She stressed that women should work together, "when they do, they create change."

Aziz also believes change begins with women, "the upbringing of children all starts with the image a woman has about herself, it is how she sees herself that reflects on how she brings up her children. If she believes she is less than her male sibling or family member, she will reflect that on her children."

She also sees the great need to provide training in schools for all individuals who interact with children, "we need to train them on harassment, how to spot children who have been harassed and how to provide them with the help they need– by doing so, we raise awareness."

When it comes to the role of families, Sholkamy said, "times have changed." She believes parents can no longer preach to their children but instead need to understand them. "We live all our lives on the internet, and it's no longer just the parents that are bringing up children. The role of the family has diminished. Awareness is building my son's or daughter's confidence and building a space for us to talk. We need to have channels to talk to our children without assuming that we have the right answer." Sholkamy also stressed the need to hire and continuously train counselors at schools to help students discuss their problems and reach out for help.

Over the next six months, the Dialogue Series will address several issues related to sexual harassment, including “Portrayals of gender in media and film”, “How do we make public spaces safe for women?”, “Are we safe in cyberspace?”, “Combating harassment on university campuses”, “Safe, inclusive and diverse workspaces”, and “Legal framework and violence against women.”