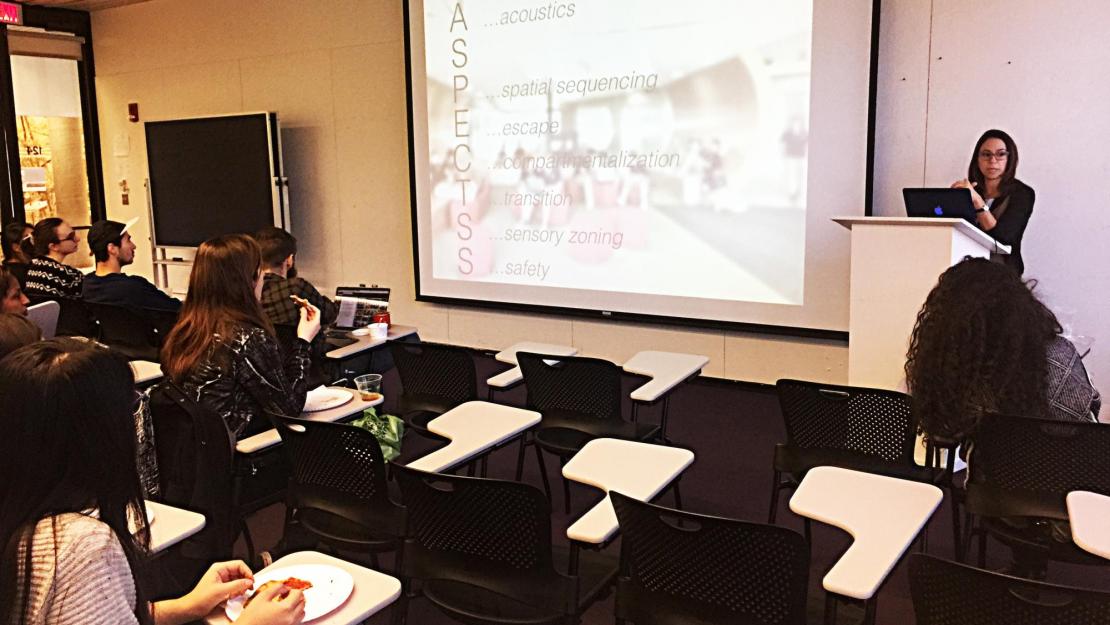 When Magda Mostafa, associate professor in the Department of Architecture, was asked to design Egypt’s first educational facility for children with autism 15 years ago, she found no existing architectural guidelines for designing such buildings and decided to create her own. This work eventually became what is now known globally as the Autism ASPECTSS™ Design Index, the world’s first evidence-based set of design guidelines outlining seven architectural criteria that help individuals with autism interact more effectively with their built environments.

Today, Mostafa is engaged in designing the world’s first complete community that adopts ASPECTSS principles, located in the United Arab Emirates. This will be an entire 500,000-square-meter, multi-use community that aims to set the global standard for universal design to include autistic and other sensory needs.

“I see ASPECTSS as an integral step toward positioning autism more centrally within the dialogue about universal and inclusive design, taking us one step closer to true architecture for everyone,” Mostafa said.

This approach does not necessarily need to be applied across the board to all elements of design, but Mostafa noted that this concept of reverse inclusion is important from a human rights perspective. “It is refreshing to flip the scenario from one in which special needs are secondary or thought of as a luxury to one where they are considered the norm when designing,” Mostafa explained.

This past November, Mostafa was invited to speak at MIT’s Department of Urban Studies and Planning Urban Africa group, as well as Harvard’s Graduate School of Design hosted by MEDiNA and the Women in Design Program. At these talks, she opened the invitation to collaborate with interested scholars and students in the future. “The objective,” she said, “is to open the channels of conversation, to present Cairo as a laboratory and identify AUC as a venue for this kind of scholarship.”

Mostafa also gave a talk at TedxCairo, the largest independent Tedx, to encourage audiences to consider the world from a different perspective, identifying autism as a different manner in which individuals perceive the world around us. ”We have an obligation to make sure that we’re designing for everyone,” said Mostafa in her Tedx talk, pointing to the responsibility and amount of influence designers can have on the daily lives of individuals.

Actively engaged in projects all over the world, from the United States and Europe to the Gulf, Mostafa noted that she has observed the ASPECTSS Design Index being incorporated more into research. “On a weekly basis, I get requests from scholars who are doing work or designing a project in places like India, Bangladesh, South America, the Netherlands and others to apply ASPECTSS to their work,” she shared. For the most part, she has seen more researchers and students making use of ASPECTSS for their research and design.

For the time being, the index has been applied mainly to learning spaces. “I have, however, been approached by families and local architects who are interested in how to set up a house with these guidelines in mind,” Mostafa said.