Women in Physics in Muslim-Majority Countries 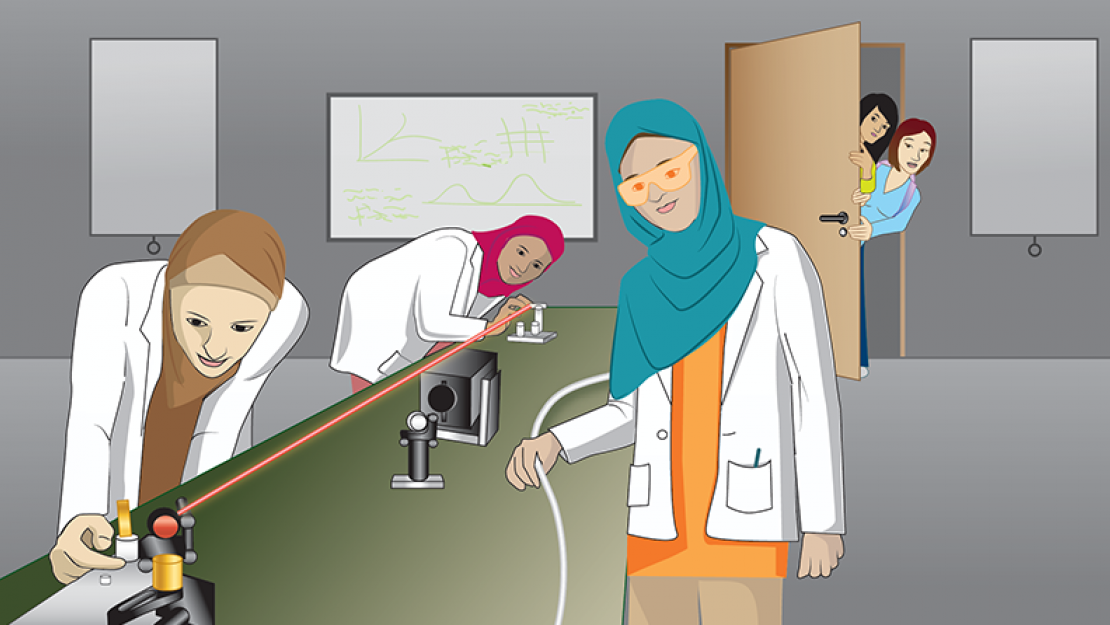 “Unfortunately, science as a field, to many, is associated with masculinity, and I wanted to challenge this myth,” said Heba EL-Deghaidy, chair of the Department of International and Comparative Education at AUC's School of Humanities and Social Sciences.

A prevalent myth claims that women are “no good” at physics, but just taking EL-Deghaidy as an example, many female members of her family are professors in physics and chemistry, and her educational background is in science education. She also observed numerous women who chose to study the various fields of science throughout her career, confirming that the myth merely stems from a stereotype, which many studies support but aren’t conclusive.

With that in mind, she took it upon herself to explore and document the reality behind women in science in general and in the Middle East, in particular.

“Research on gender-science stereotypes illustrates that there are differences between female and male youth in STEM (science, technology engineering and mathematics) school subjects. Boys are seen to be more into STEM subjects than girls,” elaborated EL-Deghaidy.

“There is even subtle and blatant stereotyping of women in physics laboratories in Western countries, such as Canada, Europe and the Unites States, identifying many ways in which stereotypes affect professional interactions and impact the careers of women. However, this argument differs based on the location. Based on rsesearch, in Saudi Arabia, the Gulf states, Morocco and Western Asia, there is an imbalance in favor of women,” she said.

When it comes to Egypt, EL-Deghaidy clarified that data is limited, difficult to find and sometimes conflicting to one another.  “The Global Gender Gap Report 2021 includes data on 156 countries, including Egypt, comparing them on the index benchmarks and illustrating gender disparity on a scale from 0-100 in political empowerment, economic participation and opportunity, educational attainmen, health and survival. The educational attainment includes the gender gap in STEM fields,” she said.

“However, there seems to be an increase in the number of women joining physics as a major. At Ain Shams university for example, a study in 2015 showed an increase in the number of females entering physics as a major between the years of 2011-2014. Similar results from Assiut University show that physics is more appealing to women than men mainly due to job opportunities," explained EL-Deghaidy.

Additionally, other factors attract individuals to specific fields, a topic which more recent studies focus on. For instance, Effect of culture on women physicists’ career choice: A comparison of Muslim-majority countries and the West focused on Muslim-majority (MM) countries that excel in female representation in physics when compared to Western countries. The results revealed that cultural, economic and societal norms play an important role in helping both genders define their interests and identities.

The study also investigated the factors that both draw women to and push them away from physics, highlighting five cultural areas where being a woman and physicist aligned in Muslim-majority countries: religion, social interactions, community goals, femininity and family life.

But how about studies and actual employment? How large is the gap and are there as many women employed in the industry as those who studied it? EL-Deghaidy elaborated that studies have identified what’s called a “leaky pipeline” that reveals a decrease in the number of women being employed after completing their studies. Taking Egypt as an example, in 2018, women didn’t exceed 24.2% of the overall workforce (CAPMAS).

“In physics, women mainly work in research and teaching positions than in industry and business,” she noted. “In academia, seven universities in Egypt compared the gender distribution of physics department faculty positions at the rank of demonstrator to full professor. Results showed that the majority of women are found at the demonstrator levels with less women being promoted to associate and full professors. Reasons for this drop are attributed to shortage in research facilities and funding support.”

Yet, El Deghaidy chooses to look at the silver lining.

“Despite the difficulties, there are various role models in the field, dating back to Sameera Moussa, the first female Egyptian nuclear physics- and recently, Elham Fadaly '13, who won the Physics World 2020 Breakthrough of the Year with her team at the Eindhoven University of Technology in the Netherlands," she asserted. "I do expect this pattern to continue as long as cultural norms are consistent. “