What Does It Take to Win an Emmy? 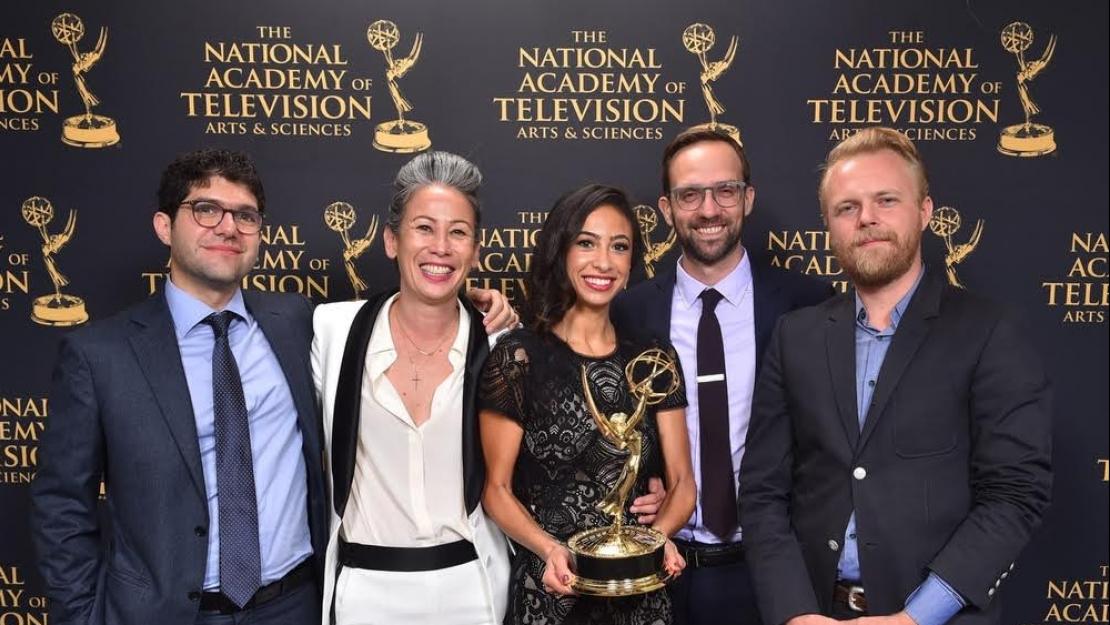 Although Yasmin Elayat ‘04 (YAB ‘02) grew up creating stories and animations, she never considered herself a storyteller. As a computer science major at AUC, she saw art as a hobby — something she couldn’t possibly make a career out of. That is, until late in her college career when saw a piece of artwork that changed everything.

The piece was a work by Daniel Rozin that was made of fragments of wood that would rearrange themselves to “mirror” the person standing in front of it, using grayscale. It was computer programmed. It had motors, but it was art. “I just knew that this was the convergence that I was looking for,” said Elayat. “I didn't know what I was going to do when I graduated or why it spoke to me so strongly, but I just felt like I could figure out a way to merge the two interests, so I did.”

Elayat has since forged a career in that convergence of two fields she discovered back when she was at AUC, earning herself a list of accolades — most recently, an Emmy Award for Outstanding New Approaches: Documentary as the director of Zero Days VR.

“I had never directed before," said Elayat. "I feel like now I can actually call myself an artist."

“I think what's unique about Scatter is that we're not really a tech company. We're kind of like an artist-led company that is building tools we need to enable our creative vision,” said Elayat, who now heads content, production and marketing initiatives for Scatter original productions and Scatter's Augmented Reality (AR) and Virtual Reality (VR) creation tools.

After graduation, Elayat went to New York University to get her master's in Interactive Telecommunications, a program that explores ways to use technology as a form of expression. After spending a few years working on interactive art installations in New York and Cairo, Elayat moved permanently to New York. Suddenly, she found herself unsure of her next career move.

“I realized, ‘I can’t become an engineer again. I've morphed into something else,’” said Elayat.

Elayat joined Scatter in 2016, after making the decision to leave the agency job she had at the time. “I think I just needed a leap of faith and to trust myself. Even if it was a financial risk, I knew that my heart was somewhere else,” said Elayat.

The Road to an Emmy

Soon after Elayat joined Scatter, the team put together their first project: a VR adaptation of the Participant Media feature-length film Zero Days, a documentary by Alex Gibney about cyber warfare and the Stuxnet virus. After trying out Scatter’s VR demo, the Gibney was sold. He said he would help Scatter with funding and getting the rights to the film, but elected not to be director of the adaptation.

According to Scatter, Zero Days VR introduces a new dimension to the original feature by telling the story from a perspective that wasn’t possible before the emergence of virtual reality. The audience is placed inside the invisible world of computer viruses experiencing the high stakes of cyber warfare at a human scale. “I was breaking apart the original script and seeing how we could tell the story from the perspective of code and from the virus, and trying to imagine these world we could create through VR," said Elayat. "I lost myself in this project.”

To Elayat, the Emmy win represents Scatter’s mission to define their term “volumetric filmmaking,” a new virtual reality filmmaking technique created by the company, which allows filmmakers to capture real actors and place them inside interactive virtual reality stories.

According to Elayat, Scatter wants to make these tools more accessible, to enable people to create content in an easier way.

“We don't want you to hire a million developers or have to learn how to code. If you're a filmmaker or someone who works in video production, we're building the tools so you don't have to learn something new,” said Elayat.

A New Type of Directing

Despite its success, there were moments where it seemed that the Zero Days VR project wouldn’t take off.

“We had a rocky start,” said Elayat. “Nothing was working, but then there was this moment a month or two before the Sundance premiere, where it was scheduled to play. I made one final change, and we tested it in the VR headset. As I watched it, I was moved and I was excited. It felt like we finally got it. That moment gave me renewed self-assurance.”

Elayat recalled how during production, many people challenged her new approach to the directing process.

“I can't tell you how many people told me, ‘You're a novice; you're doing it all wrong.’ I broke the rules, I'm new to directing, but I've been doing the technological stuff for years. I trusted my process. We finally got it right, and things got rolling.”

Zero Days VR was shown at Sundance Film Festival and Tribeca Film Festival, and from there it continued to gain recognition, eventually winning the Emmy last month.

Elayat said one highlight from Zero Days VR’s win is that it has given her field more legitimacy.

“I'm no longer a weird niche director," she said, laughing. "It feels like immersive media is now becoming something that's moving onto a more mainstream stage, and that just is a game changer for someone like me.”

A Convergence of Art and Computer Science

Elayat describes her career path as "a journey of trying to connect the dots" to find her place in the world.

"I feel like I’ve always had imposter syndrome," she said. "I'm this engineer that has always wanted to move into the storytelling world. Now I feel like I can say I am a storyteller, I am a director, I am an artist. I'm finally at the point where things are converging."

Elayat said she tributes much of her motivation to her father, Khaled El-Ayat, former professor of practice in the Department of Computer Science and Engineering at AUC and founder of Actel Telecom Engineering service.

“I looked up to my father growing up — not because he's my dad; it was beyond that,” said Elayat. “He was this powerhouse inventor. I grew up in the startup halls. I'd go to Actel with my dad and just play in the halls and draw on the whiteboards while he was doing his thing, and yet he still had this wonderful balance as a father and a supporter of my artistic abilities. Everything he did, he did with so much passion and that's has been so inspirational to me.”

As she plans for future projects, Elayat said she's optimistic about how technology can continue to grow her field.

“I know some people are scared of technology going too far. I’m not one of those people. I see the ways technology can empower us and how we can use it to extend the human experience. That is what's so exciting about it.”

How Elayat will attempt to extend the human experience next is up to her.