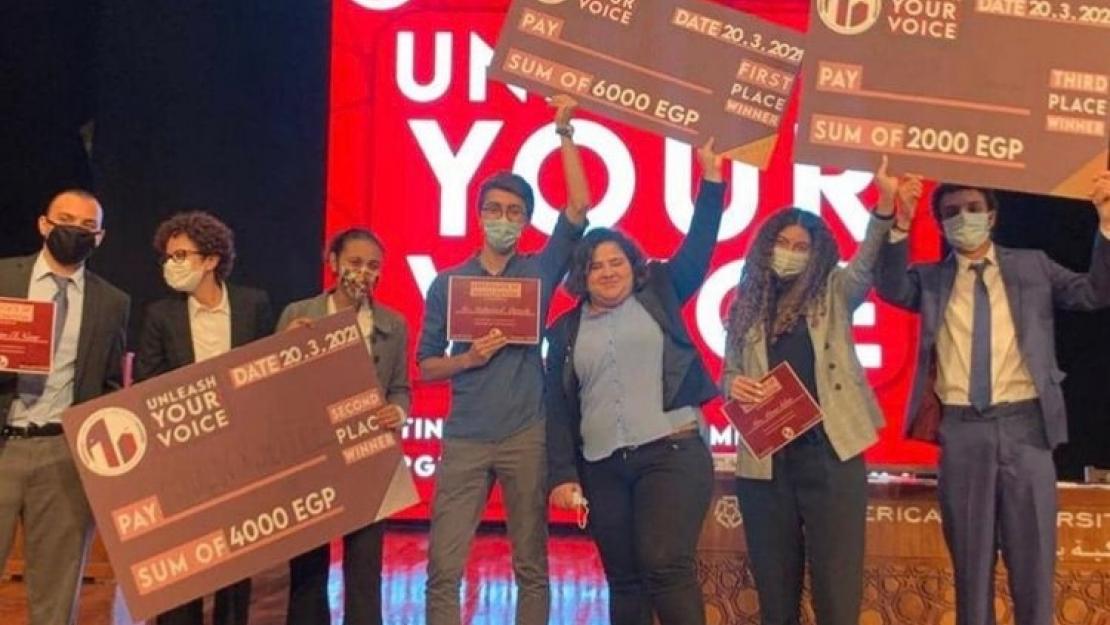 The competition winners
By
Yakin Ouederni

In light of the movement to combat sexual harassment in the country and on university campuses, AUC's student-led Debate Society held the Unleash Your Voice competition on March 20, which brought together students to debate the question: who has a larger influence on combatting sexual harassment and discrimination – society or state?

Rihem Sejil and Mohamed Aharchi, both recipients of the US State-Department Funded Tomorrow's Leaders Undergraduate Scholarship, came in first place. Sejil, a freshman, said that debate shaped her perception of reality growing up, and she believes it is one of the best initiatives for educating people, especially with issues that aren't usually talked about like sexual harassment.

"There are gaps within our understanding of sexual harassment that need to be bridged, and this can only be done through dialogue, especially if a certain issue is considered taboo," she said. "Debating sets a perfect atmosphere for people to speak freely and respectively. There are still issues in our communities that we avoid talking about because of cultural or religious constraints. The only way to overcome these obstacles is to recognize the phenomena and establish a diagnosis that eventually enables us to create solutions."

Aharchi said that winning felt refreshing and rewarding, especially after the team's sleepless night preparing for the competition.

"We believe that such debates are very important to open people's eyes on matters such as sexual assault and help people see what is actually happening and correct the misconceptions. Such events also provide an opportunity for the audience to get the view of both sides of the subject debated, allowing them to form an opinion based on factual arguments," he said.

The second place team was Shahd Aly, Ibrahim Waleed El Nemr and Nada Kahla. Aly said that she enjoyed the fact that women's rights and sexual assault were at the forefront of discussion and were being taken seriously.

"Especially in the current circumstances, this topic is very sensitive and this conversation was so important for one to think deeply of how this crime could be stopped," she said. "I am truly happy we made it to the finals in such a difficult competition, but whether we were to win or not I truly believe that this day made me think and examine my own ideas."

Ibrahim Hammoud and Mirna Saber came in third place. They said they are inspired to have taken part in this event that is a step towards progress and change.

“Quite frankly the most important part about winning was to know that we’re on the right tracks and arguing for the correct measures and precautions," Hammoud said. "Some of the main points we brought forward included how the judicial system needs to step up and provide backing and support for the victims and how the death penalty should not be the main solution to the issue at hand. I find it very important that we had this debate discussing such a volatile topic with everything going on around us, it is of the utmost importance to raise awareness and educate people about sexual harassment and its many forms and how to deal with such an unfortunate reality."

"Winning in this debate showed me that my team was fighting for what’s right, and this is just the beginning," Saber said. "We need to have more of these debates where we raise critical questions and address them in the most appropriate ways in order to better our society. This debate was much needed especially in today’s climate because it is very unfortunate to see how many people know little to nothing about the topic of sexual harassment and how we need to educate them about all of this. The debate was a great step along the path of raising awareness and my partner and I found it to be a great platform to tackle misconceptions and provide feasible solutions to help better our society so it is a safe place for generations to come."

Youssef Hashem, president of the Debate Society and economics junior with a minor in entrepreneurship, said that events like this one are of crucial importance, and he encourages students to take part in them.