A Winter of Work: AUCians Intern in Egyptian Ministries for First Time

“This is a momentous occasion. We’ll look back on this photo 20 years from now and wonder where you all ended up,” said President Francis Ricciardone, as he and the inaugural class of AUC Ministry Interns gathered to take a picture on the steps of Watson House.

The 12 assembled students were the first AUCians to intern in governmental ministries. Each spent the 2018 winter semester working in either the Ministry of Higher Education and Scientific Research (MEHSR); the Ministry of Planning, Follow Up and Administrative Reform or the Ministry of Investment and International Cooperation (MIIC). President Ricciardone, University Counselor Ashraf Hatem and other AUC administrators invited the interns to Watson House to hear their feedback on the program.

One message that each of the interns agreed on: Government work was, in many different ways, and a unique experience. “It was really efficient, and people really worked hard," said sophomore Farah Elnady double majoring in political science and economics who interned at MIIC. "There were fresh grads from AUC working there, so we got to meet alumni and discuss with them how it’s going. They were so excited about work. Even if the salary is not very motivating, the fact that you are working for a goal is very meaningful"

"The fact that you are working for a goal is very meaningful."

Mohamed Abdallah, a mechanical engineering junior who interned in the MEHSR, said that even the negatives of the internship pushed him to learn new skills. “If they were not willing, for example, to ask us to do something, we would have to present ourselves," he said. "I think it’s nice to get out of your comfort zone.”

As the interns laughed over their shared distaste for wearing suits and spending hours at a desk, President Ricciardone pointed out that it wasn’t just the students who stood to benefit from their temporary positions. “I think, I really agree with the fact that we think about problems differently,” said Toka Magdy, a sophomore majoring in architecture, who interned in MEHSR. “We were asked to modify the Facebook page. They said, ‘You have ideas, you know how to publish and market.' I think that new thing was what we as AUCians were able to bring."

"You will change the way we work."

Their feedback was also an indicator of how young people are going to shape the future of the workplace. In terms of dress, technology and innovation, Ricciardone said, “it sounds like a big part of the value propositioning is that you’re bringing the future to the ministries. You will change the way we work.” 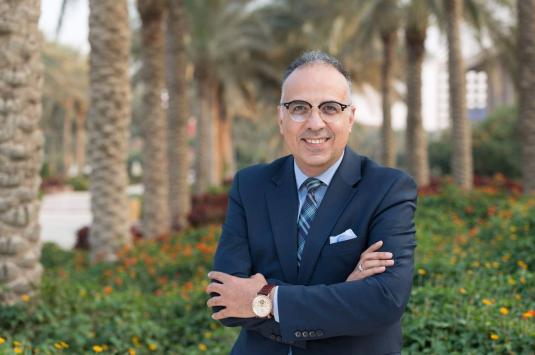 Hani Sewilam, professor at AUC’s Institute of Global Health and Human Ecology and director of the Center for Applied Resea