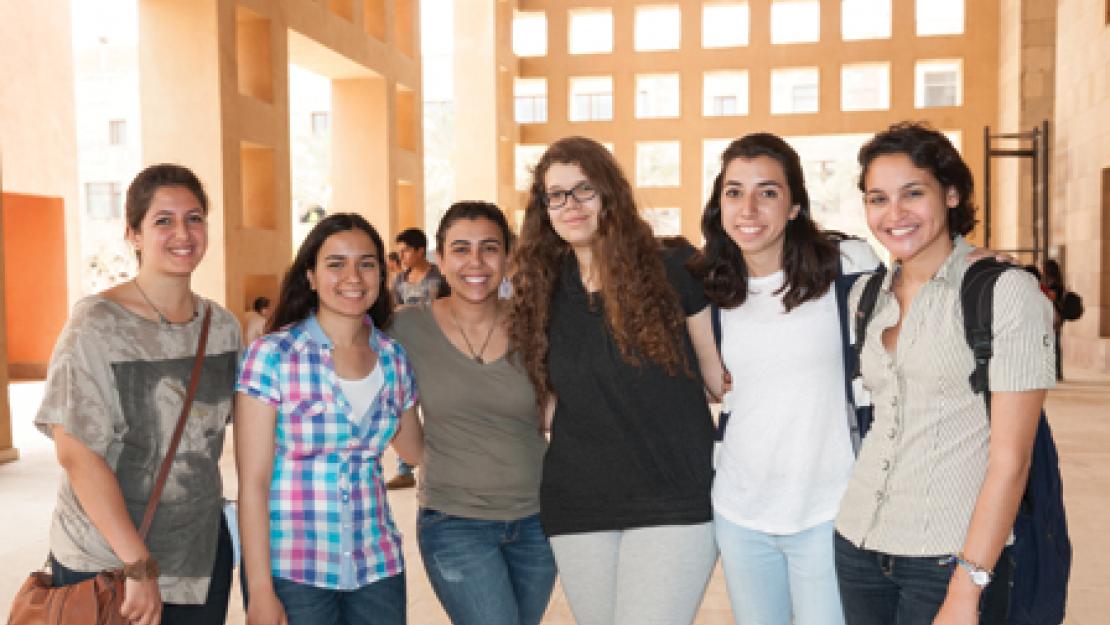 There are lots of things hindering women’s development in Egypt. We are trying to encourage women to empower themselves, then use this to empower others. Those of us with privilege and resources have to reach out and help in the community,” said Yara El Razaz ’13, who with Heba Hesham ’13, founded Heya (She): The Women’s Initiative student club to raise awareness about women’s issues and promote volunteerism. Hesham was motivated to start the club by witnessing the hardships her mother faced. “I was raised by a single mother, and when she was growing up, no one expected her to work or pushed her to be independent, because she was a woman,” said Hesham. “She ended up having to raise a child and run a household by herself. Things would have been easier for her if the expectations for women were different.” Hesham and El Razaz launched Heya in Spring 2012 with the Heya Meen (Who is She?) campaign. Around 30 volunteers walked around the New Cairo campus wearing T-shirts that said Heya Meen and conducted a survey asking people to say the first thing that came to their minds in response to that question. Male and female respondents wrote their answers on the back of campaign T-shirts. Heya members collected 370 responses, which were separated according to gender. “There were big differences between men and women’s responses, whereby women focused on strength and empowerment, and men focused on beauty and sexist stereotypes,” said El Razaz. “It showed that there really was a need for a club like this on campus,” added Hesham. Heya encourages students to participate in long-term, community-service projects to build relationships with women from different communities. “We promote volunteerism and try to provide a link between awareness and an outlet to actually do something,” said Hesham. In Spring 2012, the club launched a mentoring program at an orphanage in Nasr City. There are eight girls in the orphanage, and each was paired with two female Heya members who visit them regularly and act as mentors. “We are trying to give each girl a platform to express herself and explore what she loves,” explained El Razaz. Beginning in Fall 2012, Heya volunteers who are majoring in the sciences, medicine or pharmacology began running health workshops for women in Shubra Al-Khayma. “The goal is to form a real bond with the women who come to these sessions,” said Hesham, adding that UN Women is currently making a documentary about this program. Heya is also putting together an English program for recent female graduates of public institutions, which will be launched in Summer 2013. On campus, Heya has organized a number of events to promote dialogue and raise awareness about topics including sexual harassment, violence against women, as well as women’s history and health. “We want to raise awareness among university students about gender and women’s issues in Egypt, and to get people talking,” explained Hesham. “We like to use art because it is a more interpretative space where people can reach their own conclusions.” In collaboration with Darb 1718 Contemporary Art and Culture Center and HarassMap organization, Heya hosted an art exhibition on sexual harassment in Fall 2012. As part of its HerStory initiative in Spring 2013, Heya organized a talk about women’s history told through art and media, in addition to a tribute concert to inspiring female artists and a screening of In the Shadow of a Man, a film that interviews four Egyptian women from different backgrounds. As Egypt changes, Hesham and El Razaz hope that new possibilities for women will emerge. “I hope to see Heya grow into a movement with a presence at all the universities in Egypt,” said Hesham. “I’m optimistic because things are changing. There is more of an expectation that women should be independent. More women are in the workforce and are taking control of their own lives.” Echoing the same sentiment, El Razaz noted, “Women in Egypt are realizing they can’t be complacent anymore. No one is going to get their rights for them, so a lot of movements are coming together for women to stand up and say, ‘We’re not going to take this anymore. We want our rights.’ Seeing this gives me a lot of hope.” This story was published in AUCToday Spring 2013. To read the full issue,click here.