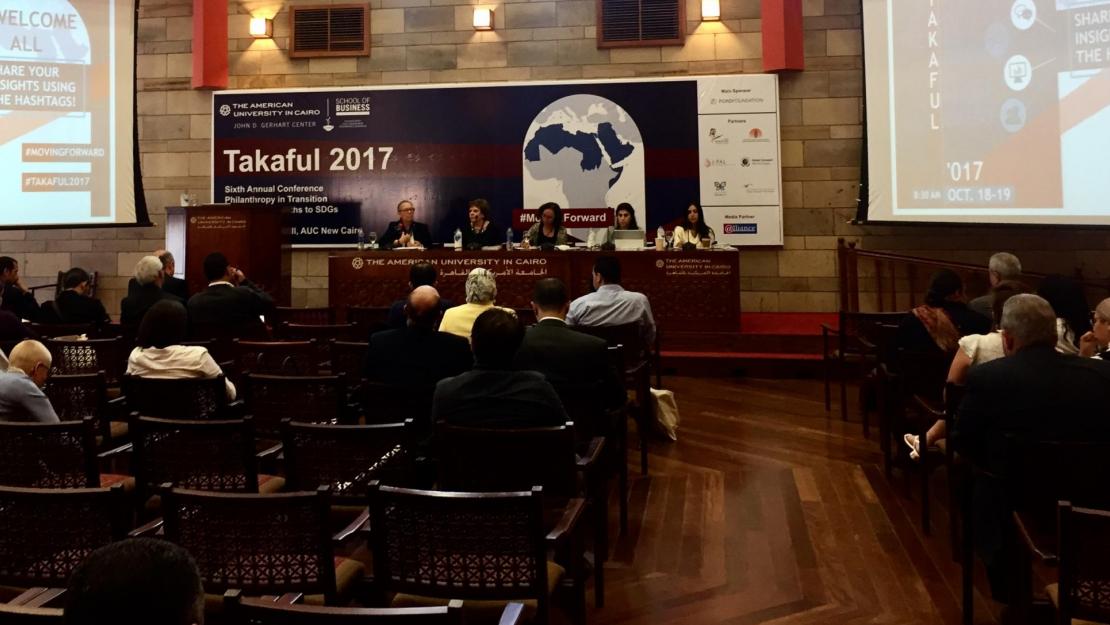 A panel on governance and accountability at the Takaful 2017 conference.
By
Elizabeth Lepro

It’s a question that reverberates through the mind of every NGO worker in Egypt: How can Egypt build and sustain a culture of philanthropy?

It isn’t that philanthropic and civic engagement organizations in the Arab region don’t exist or aren’t doing necessary work -- that much is clear from the sixth annual Takaful Conference on Arab Philanthropy and Civic Engagement, held at AUC this year.

Takaful included two days of panels and workshops focused on Egypt’s role in supporting the United Nations Sustainable Development Goals (SDGs). Among the variety of subjects discussed under the conference’s theme, Philanthropy in Transition: Exploring the Paths to SDGs, were conversations on philanthropic data, entrepreneurship for development, children and youth services, and health care. These topics brought together development and philanthropy-focused minds across the Arab region, from NGO members to professors to AUC alumni and faculty.

“This conference is in its sixth year, and it has really become a very important moment for philanthropy-minded thinkers to come together,” said Noha El-Mikkawy, the MENA representative from the New York-based Ford Foundation. “The Arab voice needs to be represented on the international level much more powerfully than it ever has.”

El-Mikkawy participated in a panel moderated by Heather Grady, a former AUC presidential intern who is now the vice president of Rockefeller Philanthropy Advisors. The panel, called “How Can Philanthropy Use the SDGs to Promote Better Governance and Accountability?” featured four speakers from foundations working in Egypt, Palestine and Saudi Arabia.

Grady pushed the panelists to dig into some of the 17 SDGs and their 169 target indicators, subsections within the resolution that provide a timeline for reaching the goals. Target 1.2, for example, aims to “reduce at least half the proportion of men, women and children of all ages living in poverty in all its dimensions” by 2030.

“The targets within the goals are where the real work begins,” Grady said. “The world’s best minds spent years crafting those targets. If you can measure against those, that’s a very easy yardstick for us and will get us to the world we want by 2030.”

Noura Selim, executive director at the Sawiris Foundation for Social Development in Egypt, doubled down on this point with a more critical angle. "I would really like for all of us in Egypt to take the conversation beyond the 17 goals,” Selim said. “As philanthropic organizations, I think our objective should also be to push our thinking beyond just the alignment of our work, but really be thinking on the target indicator level. ‘What does it mean to work on global poverty? What does it mean to supply global education?’”

Selim went on to advocate for more financial reporting and transparency from philanthropic organizations, as a move not only to hold them more accountable to the SDGs, but also to increase the professionalism of the sector.

Rahaf Al Sanosi, policy design unit adviser for the King Khaled Foundation (KKF) in Saudi Arabia, called for more transparency on behalf of governments. “Our watchdog role should not be undermined, and we should try to bring governments into account, whether privately or publicly,” she asserted.

Al Sanosi has firsthand knowledge about the power of philanthropic organizations. When KKF first began in Saudi Arabia, she said, the NGO sector there was weak. “NGOs were not institutionalized; they were not ready to join with us as partners to fight poverty,” she said. “We had to go beyond the [Millennial Development Goals] at that stage and work on what the current SDGs were calling for...so KKF’s focus shifted to building the nonprofit sector in the Kingdom.”

At the time, Al Sanosi said there were fewer than 300 NGOs in Saudi Arabia, and now there are about 1,000. “We’ve heard from the government that our ability as a foundation to bring the issue of poverty to the front has helped the government to speak more freely about this, to be more acceptable.”

Focusing on the rights of Palestinians, Tafeeda Jarbawi, director-general of the Welfare Association Taawon, expressed a shared sense of hopefulness among the Takaful attendees -- that the SDGs will provide a framework for positive change. “The SDGs are really now more aware of what’s happening,” Jarbawi said. “There is a rigorous plan that people can feel and are pushing toward.”