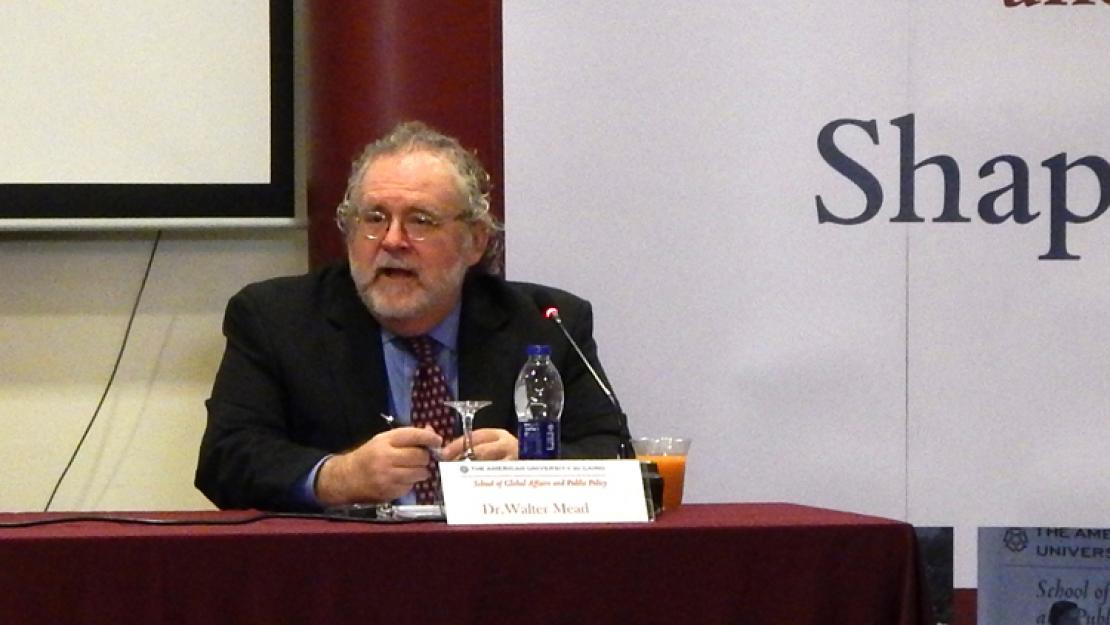 Following a number of missteps in U.S. foreign policy in the Middle East, Americans are now working to formulate new strategies for engaging with the region, argued Walter Mead, James Clark Chase Professor of Foreign Affairs and Humanities at Bard College, at a recent lecture on campus.
“Over the last few years, as the Middle East has been changing, Americans have been trying to adapt to that change and figure out new policies for a region that is very different from what it was five or 10 years ago, and I think some of our efforts have been successful; more often, I think we haven’t come up with the right answers yet,” Mead affirmed.

Mead explained that U.S. interests in the region include securing the supply of oil and preserving the security of Israel, but that these issues are often misunderstood. With regard to oil, Mead noted, the United States is not concerned with importing oil from the Middle East itself, but with ensuring that trade and business partners in the rest of the world have access to this oil. “It is not about America’s physical supply of oil,” he explained. “Actually, even a few years ago, U.S. imports from the Middle East have been declining and, today, with new discoveries of shale oil and shale natural gas, the U.S. is producing more oil than Saudi Arabia and is on the path to producing more natural gas than Russia and Canada, which has even more oil than the United States. By some estimates, there is more oil in Canada than there is in the whole Middle East. The United States has never been as interested in the physical oil of the Middle East for America’s supply as we have been interested in what the oil of the Middle East means to the world economy.”

The United States is also concerned with its own security, and it received a “wakeup call”, Mead asserted, on September 11, 2001, when it became clear that U.S. policy toward the Middle East had failed. “Our traditional policy in the Middle East had been more or less to work with whoever was ruling a particular country, not ask too many questions about how they got power or how they kept power, but just try to bargain,” he remarked. “As the Middle East began to change, it became clearer and clearer that this was no longer going to work, but what does one do instead? The Bush administration and the Obama administration have brought some very typical American ideas to their approach to foreign policy. I think both administrations got some things wrong, some things right, probably in both cases more wrong than right."

The policies of the Bush era were largely based on the assumption that the autocratic governments of the Middle East were keeping their countries from developing and crushing their citizens beneath repressive policies, creating frustration and rage that drove them to join militant groups. The neoconservative thinking in the United States at this time, Mead explained, was: “We will build a democracy in Iraq by overthrowing Saddam Hussein, and then that shining example of democracy will lead to all the other countries in the Middle East wanting to be more like the new Iraq. We will have democracy, freedom and progress in the Middle East.”

After the failure of this attempt to transform the region and with the election of President Obama, who had been opposed to the Iraq war from the beginning, the United States changed tactics. Obama was very skeptical of military solutions to the problems of the Middle East, but also well aware that the problem of violence directed against Americans, not to mention violence directed against people in the Middle East by religious radicals, was a continuing and growing threat,” said Mead. “Obama’s idea was based on our thinking in the Cold War, where we had the communists who were our enemies, but then there were the European Social Democrats, many of whom were Marxists and trade unionists, but they weren’t communists. They rejected the authoritarian politics of the Soviet Union and wanted nothing to do with Stalin. They were very helpful allies to the United States in the Cold War. So maybe the moderate Islamists like the AKP and the Muslim Brotherhood can be in the war against terror what the Democratic Socialists were in the Cold War against the Soviet Union.”

Mead stressed that while the United States did not work to get the Muslim Brotherhood elected in Egypt, they were certainly willing to work with them as part of their strategy to “bring moderate Islamists under the tent,” in the hope that the everyday challenges of governing would moderate these Islamist groups even further. “It’s fair to say at this point, that that plan has also not worked,” Mead remarked. “If anything, considering ISIS and the sort of revival of Al Qaeda, in some ways the terror problem is more dangerous than it was in 2008.”

Having tried two approaches to engaging with the Middle East and now dealing with the consequences of two failures, Mead speculated that both the American foreign policy establishment and the American people are not sure where do go from here. “This is not a problem we can ignore, but what do we do next?” he asked. “I don’t think we know. Different think tanks, presidential candidates and senate candidates are trying to develop new approaches. I think we will be talking to officials in Egypt and other countries because we may be more aware of the limits of our knowledge, having tried two things that didn’t work, we are now not as sure as we used to be that we know best.”