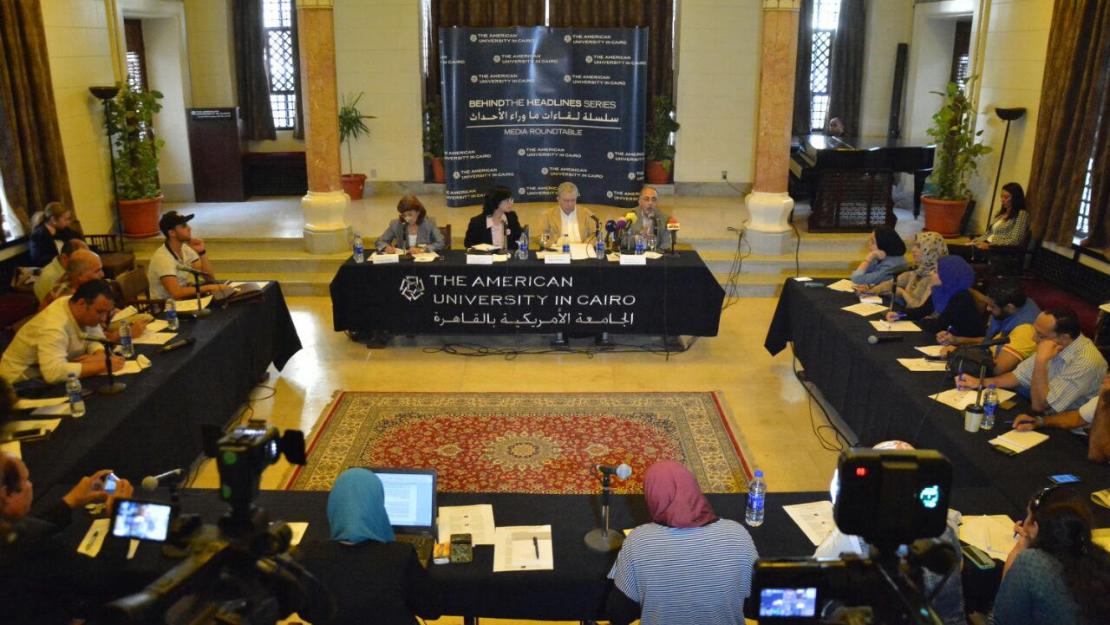 “Whether it’s Clinton or Trump, the next U.S. president is doomed to have a legitimacy deficit because to many Americans, they’re choosing the lesser of two evils,” said Bahgat Korany, professor of political science and director of the AUC Forum. "Moreover, each of the candidates seriously undermined the other politically and personally during the three TV debates, thus contributing to this legitimacy deficit."

Korany spoke as part of the Behind the Headlines media roundtable series in a panel discussion titled “U.S. Elections: Between Clinton, Trump and the Middle East.” Speaking a day before the U.S. presidential election, AUC faculty members examined the local and regional implications of Donald Trump or Hillary Clinton coming to office. In addition to Korany, Magda Shahin, professor of practice in the Department of Public Policy and Administration and director of the Prince Alwaleed American Studies Center, and Mustapha Al-Sayyid, adjunct faculty in the Department of Political Science, also took part in the panel.

"Indeed, U.S. society is facing severe political and ideological polarization, as well as the undermining of the major political parties, especially the Republican Party ” explained Korany. "It is a political system in crisis during elections and beyond. Many Americans who will actually go and cast a valid vote will opt for Clinton half-heartedly. They no longer respect the 'Washington establishment,' but still don’t want Trump. It is a vote against Trump rather than for Hilary. This is a dangerous situation for the superpower whose capital, Washington, is considered by many to be ‘the Capital of the World.’ If a U.S. president comes to power with such contested popular legitimacy and trust deficit, this will have a negative effect on the very credibility of future policies, not just in the Middle East, but worldwide."

In terms of the Middle East, Korany noted, with the exception being the Iran deal, where Trump is closer to the Gulf and Israel's position, Trump and Clinton exhibit mostly differences in emphasis and sophistication. "The major difference is that Trump –– with his aggressive crude capitalistic ethos and inexperience in politics –– is too simplistic, narcissistic and impulsive," said Korany.

For Al-Sayyid, Trump is part of an international phenomenon. “We’ve seen it with leaders in Hungary, France, Germany and Austria: speeches that focus on generalization and stirring people’s emotions. That’s what Trump is doing, and the reason for that boils down to capitalism,” said Al-Sayyid. “The middle class is suffering the most from capitalism, and Trump claims he has all the solutions.”

In fact, Al-Sayyid noted, Trump’s solutions are really problems in disguise. “Trump is suggesting a reduction in taxes, but this will lead to an increase in the U.S. budget deficit,” he said. “Even the rise in military spending that he is proposing won’t be possible due to the lack of resources in the U.S. budget. His policies will only exacerbate the U.S. economic situation.”

What’s with the Middle East?

If Trump were to become president, his first year in office –– as it pertains to the Middle East –– will be characterized by “floundering,” described Al-Sayyid. “He will try to leave his imprint on U.S. foreign policy in the region, but he is bound by institutions such as Congress, the National Security Council, think tanks, as well as U.S. media and corporations,” declared Al-Sayyid. “His inclinations toward the Middle East will show during his first year in office.”

Nevertheless, for both Trump and Clinton, their policies in the Middle East ­­–– from Iran and Iraq to Syria and Yemen –– will probably not stray away from Obama’s policies, albeit for different reasons. “Even though Trump is against the nuclear treaty with Iran, he has no other option,” said Al-Sayyid. “With Syria, he has declared that Putin and Assad are fighting terrorism, and Yemen’s situation will be left for UN peacemaking efforts, whereby the United States will not interfere.”

As expected, Al-Sayyid said, Clinton will build on Obama’s foreign policies. “Most probably, the current situation will continue, with no U.S. military forces in Iraq or Syria, and no deliberate U.S. effort to resolve the refugee crisis in the Middle East,” Al-Sayyid said. “Obama’s policies have shown that the major U.S. interests are not in the Middle East, but in East Asia, particularly with oil being abundant in world markets at a decreasing cost. Even terrorism in the Middle East is not a major concern, since the United States is primarily concerned with terrorism on its own land.”

The Palestinian-Israeli conflict, however, may present an opportunity for Clinton. “It’s every U.S. president’s ambition to resolve this longstanding conflict,” said Al-Sayyid.

But it may be more than just ambition, as Magda Shahin put it. “It would give the United States an edge over Russia and help it gain more ground,” said Shahin, noting how Clinton’s political experience is an advantage in that respect. “With the current political turmoil in many Arab countries, the Palestinian-Israeli conflict may also be easier to settle than other conflicts in the region.”

And this is where Egypt’s role comes in. “Egypt is the gateway for peace and stability in the region and is the only country that can mediate the Palestinian-Israeli conflict because of its regional influence and impact,” said Shahin. “This is a chance for Egypt to reaffirm its role in the region.”

Shahin noted that Egypt’s leading role in the region was demonstrated twice in recent history: during the Camp David accords and the First Gulf War. “Egypt needs to maintain positive relations with the United States, and, in turn, the United States has to be aware of Egypt’s influential role in the region,” Shahin said. “In the midst of the religious and ethnic turmoil in the region, finding a permanent and just solution to the Palestinian-Israeli conflict in accordance with the two-state approach –– with Egypt’s help, advice and mediation –– would undoubtedly reassert Egypt’s role as a regional power.”