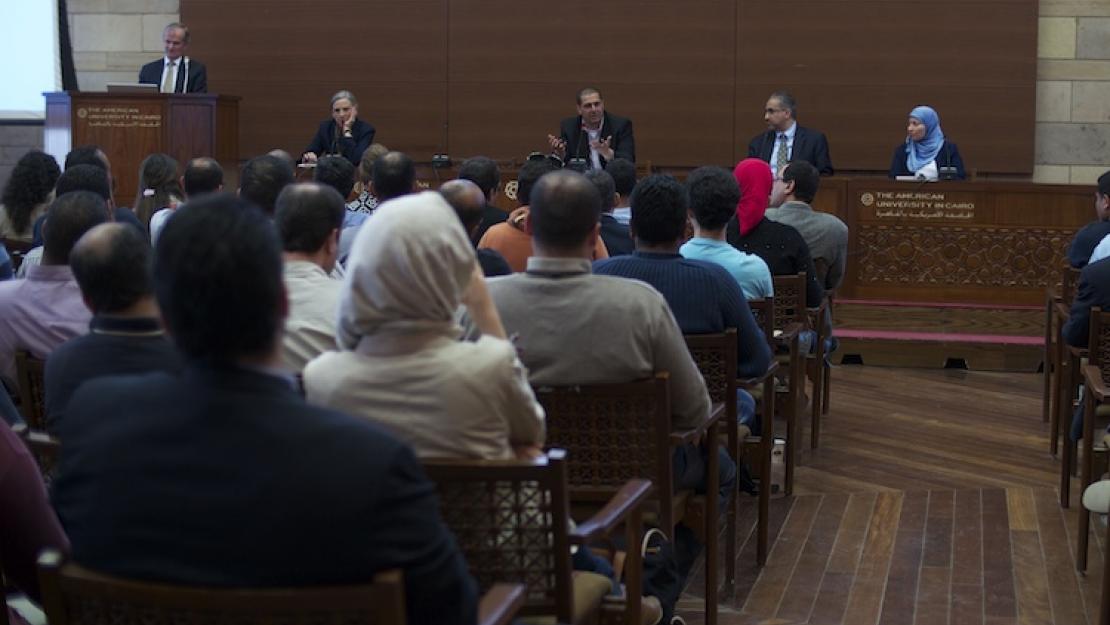 “Starting fiscal year (FY)16, we are projecting a balanced budget or better through FY19,” said Brian MacDougall, executive vice president for administration and finance, at the University Forum yesterday.

Before delving into the FY16 budget, MacDougall explained that AUC is blessed with an endowment, and that income from this endowment is needed to cover the University’s operating costs. In response to heated criticism from students and staff members about why AUC had not increased its draw on the endowment to alleviate the budget deficit over the past few years, members of the senior administration affirmed that a 3 to 5 percent annual draw of income from the endowment is what is in accordance with University policy, set by the Board of Trustees, and is also common practice in American universities.

“There were years when the University drew 3 percent from the endowment, but during such an austerity period, we’re drawing 5 percent, said Khaled Dahawy, vice president for student affairs. “AUC is approaching its 100th anniversary, and we want it to live another 100 years, not sell all its assets now because it is undergoing a deficit. On the contrary, we must work to develop this endowment because the greater its value, the greater the returns the University gets.”

MacDougall echoed similar sentiments, saying that because an endowment is expected to produce current and future income to cover the University’s operating costs, “the endowment fund is intended to grow so that it can produce more income in future years to cover increased costs,” he said. “As the total value of the endowment grows, the University is able to generate more income.”

In the 2016 balanced budget, which will begin on July 1, 2015 and will operate on a LE 7.75 exchange rate, the endowment income is forecast to be $26.28 million, up from $24.5 million in FY15 and $22.8 million in FY14. “That is why the FY16 budget includes provision of modest salary increases for faculty and staff,” MacDougall said. “Currently, mechanisms are being put in place for determining the distribution of staff salary increases.”

The FY16 budget also includes a 5 percent increase in tuition for incoming undergraduate students and a 10 percent increase for graduate students; continuation of the second year of the three-year staff planning program for levels five and above; discontinued use of the Zamalek Building, which is expected to save $0.5 million; and reintroduction of the academic initiatives budget, with a $0.65 million allocation. The budget from annual gift revenues, or fundraising efforts, is expected to rise from $5.1 million to $6 million.

In terms of revenue, MacDougall pointed out that the largest source of income for the University is 1) tuition and fees, followed by 2) adult education, which includes the School of Continuing Education, School of Business Executive Education, and Engineering and Science Services programs, then 3) auxiliary services, which comprises AUC Press, transportation, housing and food services, 4) current annual gifts, 5) research and external grants, 6) endowment income and 7) investment income.

In terms of expenditure, MacDougall indicated that the largest spending item for the University is 1) salaries and benefits, followed by 2) financial aid and scholarships, then 3) supplies and services, 4) AUC utilities, which had to increase this year due to the rising cost of fuel, according to MacDougall, 5) debt service and 6) research and external grants.