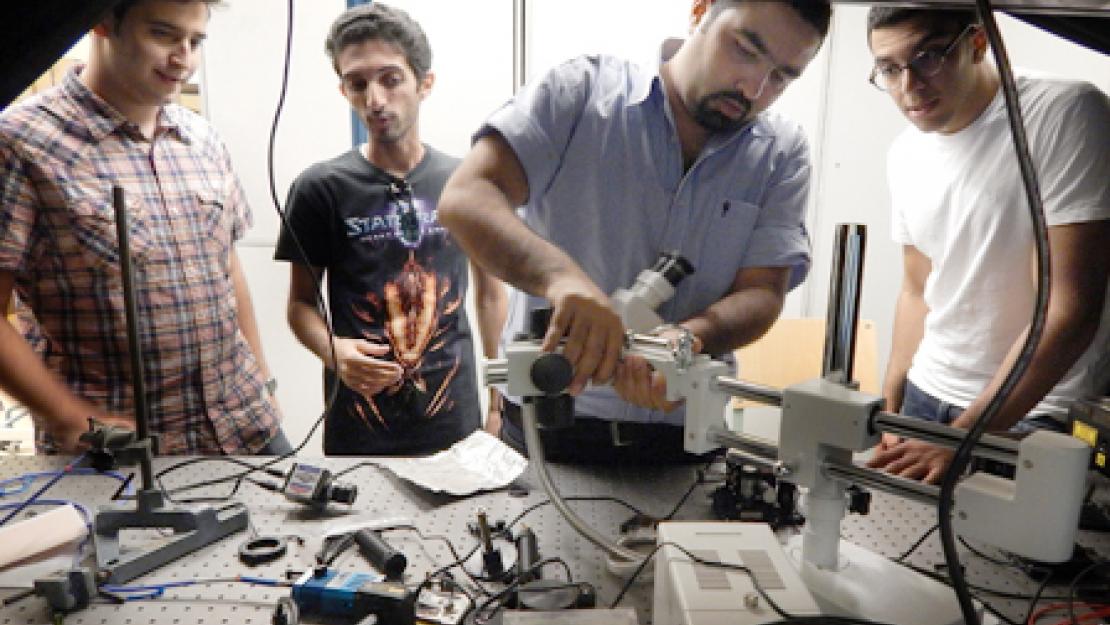 Abdulilah Azzazi, a physics undergraduate with a minor in computer science, has designed novel nano-scale devices for optical interconnections, allowing light to communicate between chips and cores on computer motherboards, increasing speed and reducing cost. One of the smallest devices ever designed, at 500 by 500 nanometers, the design will be sent to a Japanese university for fabrication and will be returned to Egypt for testing.

“The motherboards have multi-core systems, and the components of these systems traditionally communicate through electrical signals, which slows down computer operation,” explained Azzazi, who will be presenting his work to nearly 20,000 experts in the field at the international Photonics West conference in San Francisco next February. “Using optical interconnections, tiny devices would be placed on chips in the motherboard to enable sending and receiving several light wavelengths on many frequencies. Light is a solution to speeding up PCs while keeping their systems from interfering with each other so they still work. This tiny device will have a very sharp, quick response.”

Azzazi is one of several undergraduate students who are at the forefront of the nano-optics field, conducting graduate-level research, applying for patents and publishing peer-reviewed articles under the guidance of Mohamed Swillam, assistant professor in the Department of Physics. “Graduate students do research and publish papers; this is their job. But this is not the job of undergraduates,” noted Swillam. “You will never know if you will be a good scientist or engineer until you try, so the best time to investigate skills and capabilities is while you’re an undergraduate student to find out what you like to do, then do what you like, because that is where you will succeed most.”

The students, Mahmoud Desouki, Mostafa Hendawy and Azzazi, have been collaborating with Swillam on two different projects that utilize their strengths and backgrounds. Desouki, a biology major with minors in physics, math and chemistry, and Hendawy, an electronics engineering major with a minor in physics, are working on a super-lens with tremendous focusing powers that can visualize tissues, and optical nano-tweezers, which can trap molecules.

A super lens is a lens with high-imaging capabilities that can see molecules that are normally too small to be seen by a normal microscope. “In basic labs, you see bacteria under the microscope, but you cannot see what’s inside bacteria without using something like the electro-microscope, which is the size of a room,” noted Desouki. “With the super lens, which is a few micrometers tall, you can see what is inside the bacteria using the normal wavelengths or lights; you do not have to use electromicroscopy. Basically, you use a light microscope to do what regular microscopes do, which reduces the cost of research and the size of the instruments.”

In addition, Swillam explained, using a super lens, or a normal lens with high capabilities, decreases the chance of damaging tissues that are normally difficult to see, which can occur in electromicroscopy. A super lens can also be used as “optical tweezers” to trap and manipulate biological molecules.

Swillam, the author of the recently released book Photonics Optimization, which presents novel approaches for efficient optimization techniques, is working with Desouki to create a lens with new characteristic and imaging properties, optimizing its capability. The design was approved for patent last month by the United States patent agency, and a journal paper is in process. “Others are trying to do similar things, but with a more complicated structure,” remarked Swillam. “Ours is much simpler.” “With the new achievements of nanotechnology, we can beat the classical limit of optics and obtain novel functionalities based on new physics, said Swillam, who teaches the undergraduate course on waves and optics. “The undergraduate students are excited to learn about this new physics, which opens the door to many novel applications. I am trying to simplify these new concepts in my courses so the students will be eager to learn more about the concepts and applications.” Looking ahead, the students dream of making a breakthrough in their fields and constantly driving innovation. For Azzazi, his hopes are to revolutionize computing and Internet technology using his new device. “If we manage to develop this technology, it could be used for optical Internet transfers, making the Internet much faster,” he said. “This is far in the future, but I know we could make it.” Photo caption: Swillam (center) and his students are at the forefront of the nano-optics field