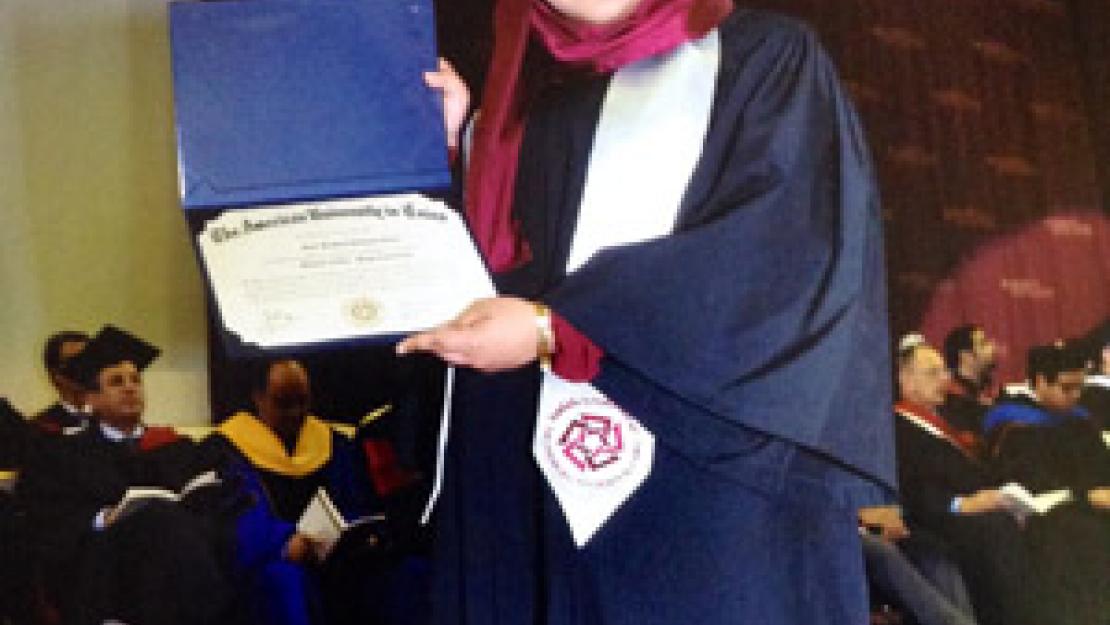 An economics graduate with a grade point average of 3.71, Maha Ahmed, the Thomason Family Public School Scholarship recipient, says she gained privileges at AUC that she would not have have access to without the scholarship. “This scholarship totally changed my life,” said Ahmed. “I did not want to pursue my bachelor’s degree in any Egyptian university, because its system depends on memorizing rather than understanding,” added Ahmed, whose sister was also enrolled at AUC through the Public School Scholarship Fund.

Ahmed chose to study at AUC because of its liberal arts education system, its cultural diversity and the competitive edge she will have in finding a job. “What I enjoyed most about my experience at AUC is the exhilarating student life, which included the AUC Speaker’s Corner where I got the chance to discuss issues related to AUC and Egypt, studying in the library, participating in the work-study program, which prepared me well before joining the work force, and the extracurricular activities, which allowed me to give back to my community.  That is in addition to the numerous events and concerts that we organized through our student clubs,” said Ahmed.

The scholarship gave Ahmed the chance to socialize and interact with people from different countries and backgrounds. It also opened the door for her to participate in many activities, which helped her acquire new skills and become more independent. Ahmed joined the Lazord Civic Leadership Academy, part of the John D. Gerhart Center for Philanthropy and Civic Engagement,  which empowers select AUC students and young civil society leaders by offering them guided opportunities to expand their skills in ethical leadership, civic engagement and strategic philanthropy. She was also a member in Alashanek Ya Balady (For You My Country), which focuses on sustainable development in the Ain El Sira district through economic empowerment of the underprivileged and promoting a culture of social responsibility and activism among the youth. Ahmed was also a member of Glow, a community service club that aims at developing student leadership skills, and a volunteer in the Anti-Cancer Team for Children and Volunteers In Action student clubs.

In addition to the extracurricular activities, Ahmed was also selected to represent the AUC School of Business at the EQUIS accreditation mock visit, the world’s leading international accreditation for business schools. She also did several internships in banks including Barclays Bank and Al Ahli United Bank. “Through the different activities I joined, I experienced the spirit of team work, acquired more communication skills and became more confident in public speaking. My English also became much better,” Ahmed continued. “In addition to this, I now have basic knowledge in different fields besides my major.”

Ahmed plans to pursue her master’s degree abroad to gain enough experience to run her own business one day. In describing her experience at AUC, Ahmed said: “Studying at AUC is a life changing opportunity. It made me realize aspects of me I did not know before. It changed my perception for everything in my life; it made me look to everything with a deep, criticizing eye. This opportunity put me on the first step to achieve my dreams.” For Ahmed, being an AUCian means “to be proud, loyal, committed and confident because you are belonging to the best educational institution in the country, if not in the region.”