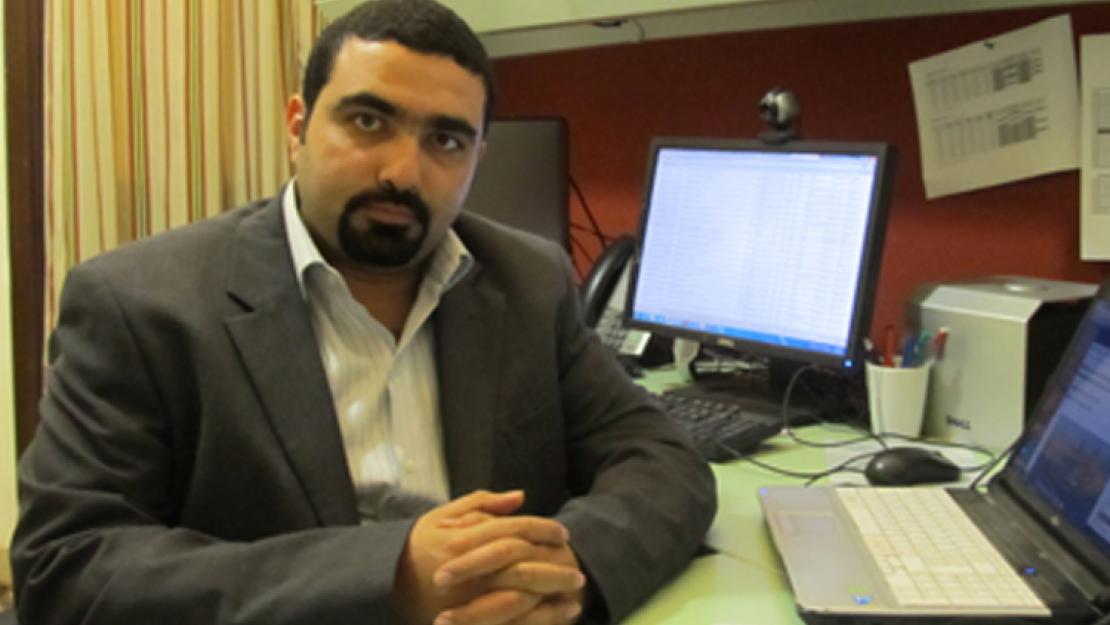 Mohamed Swillam, assistant professor and associate chair of the Department of Physics, recently received the state award in the Advanced Technology field for his work in nanoscale device fabrication and optical research, commonly known as nanophotonics.

Swillam was recognized alongside 43 other distinguished Egyptian scholars, out of a total of 350, who received state awards in science and technology this year.

Swillam has focused his research efforts in the last three years on the fabrication of nanophotonic devices, which transfer data at a high speed using light pulses rather than electrical signals, with promising applications in the fields of computing and telecommunications. These high-quality nanophotonic devices are primarily made using plasmonics, which incorporate electronic transfer of data at optical frequencies, thus allowing the rapid transmission of huge amounts of information over tiny wires, as opposed to bulky ones.

“These devices are now utilized to build integrated optical communication systems and can be used for transferring data over the Internet, for example,” explained Swillam. “The primary benefit of optical nanodevices is that they are very small, but can hold very large amounts of data without taking up a lot of space. This will help in the use of optical interconnect systems that will make the computation speed of computers much faster, as the data will be sent over the motherboard as light pulses. Our aim is to make optical devices as tiny as the transistor in current technology. Once we do this, we can replace the electronics with optical circuits and use light to carry the data in consumable devices such as laptops and cell phones, which will be faster and more functional.”

Swillam and his team are also using these devices to make a complete laboratory on one chip, a technology called lab on chip. “This technology requires very sensitive sensors with a compact size to integrate many sensors on the same chip,” he said. “It can be utilized to analyze a complete blood picture using only one drop of blood. We are making it smaller and more sensitive with our novel designs using plasmonics waveguides.”

One important area of Swillam’s research addresses the challenge of designing high-quality nanophotonic devices on such a minute scale with subwavelength dimensions. “The process is very complicated because the dimensions of the given device can only be about 500 by 500 nanometers, and it still has to have excellent performance,” he noted. “This, of course, requires very high-tech fabrication and testing facilities, which is a challenge in Egypt at the moment, but AUC’s facilities and funds have helped tremendously in this respect.”

The state award took into account five research papers that Swillam submitted –– which he described as milestones in his career –– in addition to the full body of his work in the area of nanophotonic devices and his contributions in advancing the field. “This is the first time that I’ve had my work recognized by the Egyptian government,” Swillam said. “I am very pleased that my efforts in fabricating and measuring nanodevices have been recognized, especially since most of the five papers I submitted were written after I joined AUC in 2011. During this time, my team and I proposed many novel optical devices with nanoscale dimensions and superior functionalities. We created silicon nanowires, which can be used for solar cells, optical sensing and have very good potential for use in telecommunications. These wires are so small that the diameter of a single one measures only about 20 nanometers, or a maximum of few atoms of silicon.”

In addition to this recent recognition by the state, Swillam’s research has received past awards from Masr El Kheir Foundation, the Ontario Ministry of Research and McMaster University. He has also recently been awarded two international research grants and one from the Egypt-based Information Technology Industry Development Agency to further fund and support his research in using silicon in optical nanoscale devices and optical communication.

Highlighting the significance of this research, Swillam noted, “Our work tackles problems that will have to be addressed in another five or six years, and that’s why it is so important. When I submitted my papers to be considered for the award, I was concerned because the optical science community in Egypt is small. This award is very special to me because it highlights a research field that is so greatly underdeveloped in Egypt.”