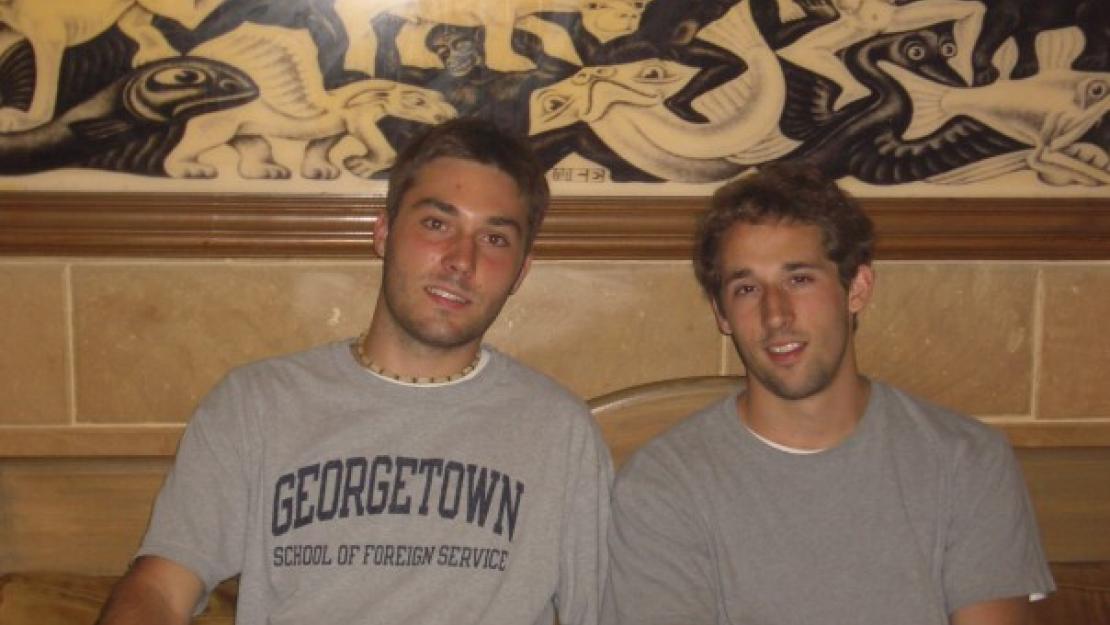 In 2005, while studying at Georgetown University, Trae Stephens (YAB '05) made the decision to study abroad at AUC and further develop his regional knowledge and Arabic language skills. Now a principal at Founders Fund -- a venture capital firm known internationally for its early investments in Facebook and SpaceX, among many others -- he has used the knowledge acquired at AUC at every step of his career.

Stephens met with News@AUC to discuss how he has been able to merge his passion for the Middle East with his experience in the tech community.

1) Why did you originally decide to study abroad at AUC? What piqued your interest in the Middle East and Egypt?

I knew that I wanted to study abroad in the Middle East and do as much of a language immersion as I could. There were handful of options that my university, Georgetown, thought were acceptable. They had a strong relationship with AUC and a whole established program, and that seemed pretty appealing to me. At the time, the University was in Tahrir Square, which I thought was insanely cool, literally living in the Nile on Zamalek.

I’m also a huge history fan, so being in a place like Cairo was really compelling to me. I thought it would be important as I was learning spoken Arabic to be in a place that had wide recognition and understanding across the Arab world because of the pop culture that flows out of Egypt; that was definitely a big part of my decision. I didn’t want to go to a place like Algeria or Morocco and learn spoken Arabic that the rest of the Arabic-speaking world didn’t understand.

2) What effect did studying abroad at AUC have on your life? How did it help shape your career?

I spent a lot of time at AUC focused on both spoken Arabic and culture. I studied governmental systems in the Middle East, and I studied Islamic philosophy. I spent a lot of time picking the brains of my professors, trying to better understand what it is that’s core, or foundational, to the culture that in the United States we don’t have enough of an insider view on. Getting that core understanding of motivations and systemic thinking and how that differs from Western Enlightenment philosophy was really helpful in my work doing counter-terrorism and interacting with the Middle East from a business perspective, both at Palantir Technologies, an early-stage tech startup company where I worked shortly after graduation, and in my work now at Founders Fund, where we have investors from the region.

At Palantir Technologies, we worked on building big data analytic software for the government. There were about 25 people when I started working there, and I spent the next six years at Palantir scaling up the business. When I left in 2013, there were almost 2,000 people in the business, hundreds and hundreds of customers and billions of dollars in business. So it was an incredible journey that gave me the opportunity to overlap the interests that I had in Middle Eastern work and the tech community. I had the opportunity to work with various Middle Eastern companies and continued to use my language skills that I had picked up at Georgetown and AUC.

So I think that the cultural experience is probably the most important from my time at AUC and in Cairo, but the language aspect is also very important. Speaking Arabic has given me an advantage at every step of my career. Being able to speak with investors from the Middle East in Arabic has been fun and, hopefully, helpful to my work.

3) For those who are less familiar, can you explain a bit about Founders Fund?

A venture-capital firm, like Founders Fund, works in an industry in which investors put money into private companies to buy into equity in the business. The best example of this is usually in the tech community, where we invest in the early Facebooks, Airbnbs or SpaceXs for a percentage of the business so that as the company grows, our fund grows with them. We’re usually taking on a lot more risk than say, for example, in public market investments. So one way of thinking about this is that if we make 100 investments, more than 90 of them will completely fail, and we’ll probably lose all our money, but the handful of companies that do work will more than make up for the other losses.

4) What advice do you have for AUC students who are interested in going into venture capital or the tech field?

The Middle East is getting more and more active in the tech community. Saudi Arabia and the United Arab Emirates have both made enormous sovereign investments into technology. There are so many opportunities within those counties and within the infrastructure that flows out of that. Saudi Aramco is all over the place doing all sorts of amazing things, and they are based in Dhahran, in the Middle East. In the UAE, they have enormous sovereign funds: Mubadala, the Abu Dhabi Investment Authority and the Emirates Investment Authority, for example. There are all these places that are doing important and innovative tech investing, which you wouldn’t expect if you weren’t paying attention to what is going on in the Middle East.

For actually getting involved in venture capital in general, the most important thing is to have experience in the tech community that gives you some sort of advantage. There wasn’t necessarily anything in my formal education that prepared me to graduate and then immediately start working for a venture capital firm on day one. So the important thing is working at a company where you can get the experience of understanding what works and what doesn’t, and having some sort of edge in being able to evaluate things based on that experience. So if you’re interested in working in venture capital, the first step is finding a company that you can work for that is going to teach you a lot about work in the tech community.

5) Is there a memory or experience that sticks out from your time at AUC?

My Islamic philosophy class ended up being the hardest and most memorable class that I took at AUC. The professor was an American and really challenged the class to think about the core of their fundamental way of knowing things. We talked about the Islamic concept of being and oneness: all of the things that made the Arab Muslims in the class know core aspects of their thinking. For the non-Arab Muslim students like me, it helped us understand better ways to sympathize with a group of people. This is not tied to the last 25 years of history, but actually the last 1,400 years of Middle Eastern enlightenment philosophical history. That class was a very important part of my understanding the people of the Middle East, rather than just understanding the language or having a tourist experience.

As far as the non-academic experience, I went on a trip to Siwa, which was awesome, and I would recommend it to any student, particularly an American; visiting the Western Desert was almost a monastic experience. Overall, I had a great time. Studying at AUC was one of the best experiences of my life, diving in and learning so many new things.