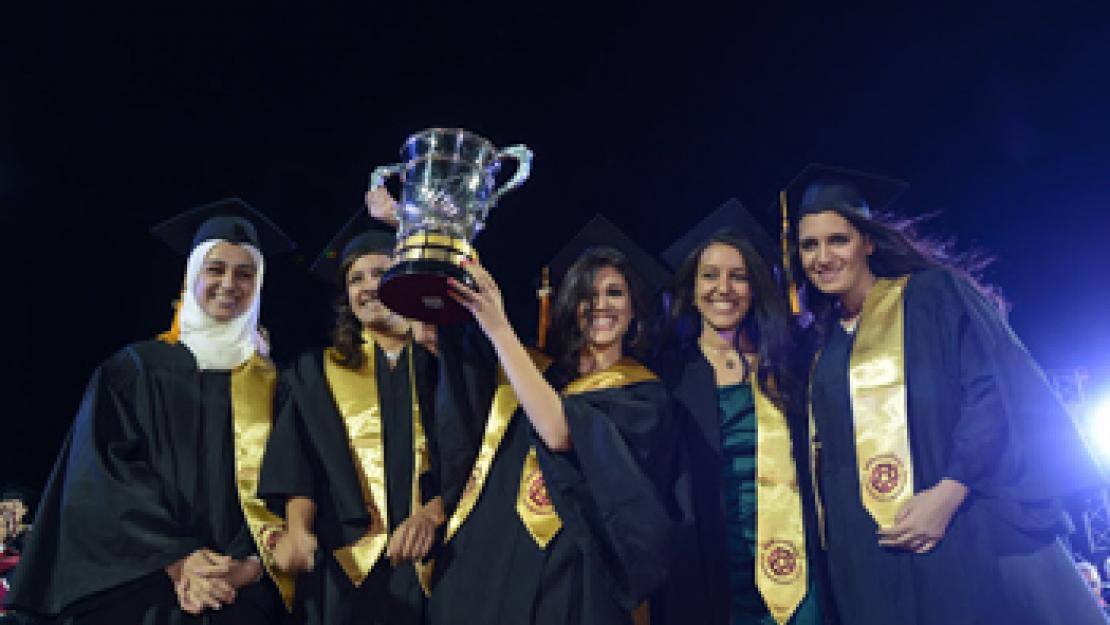 The American University in Cairo (AUC) held its Spring 2013 commencement ceremonies for 702 graduate and undergraduate degree candidates, marking the end of the 2012 - 2013 academic year. President Lisa Anderson awarded 557 undergraduate and 145 graduate students from each of AUC’s schools.

At both ceremonies, students were recognized for their academic achievements, as well as their accomplishments outside the classroom. Named awards have been established by the generous contributions of individuals and families to recognize undergraduate students for their outstanding academic achievements, as well as their participation in community service     work. Students who received named awards at the June 2013 commencement include:

Dalia El Serafy, psychology graduate, received the Ahmed H. Zewail Prize for Excellence in the Sciences and the Humanities. Ahmed H. Zewail, AUC trustee and winner of the 1999 Nobel Prize in chemistry, established this award to recognize AUC honors graduates who demonstrate extraordinary commitment to the pursuit of scientific inquiry and the affirmation of humanistic values.

Zeina Mohamed, political science graduate, received the Ahmed El Mehallawi Family Award for demonstrating academic achievement and community involvement through extracurricular activities. Mohamed was a member of the Help Club at AUC, serving as its human resources director during her last two years at the University. She is grateful for having had these kinds of opportunities, saying, “90 percent of what I will take with me into the future I learned from the activities I participated in…AUC offers the best education so we all have a responsibility to be involved.” The Ahmed El Mehallawi Award was established by the late Nawal El Mehallawi, an AUC alumna of the class of 1956 and former general manager of Al Ahram Center for Translation and Publication, in honor of her father.

Karim Ayyad, petroleum and energy engineering graduate from Mansoura, received the Dr. Abdel Rahman El Sawy Award. The award was established by El Sawy family in honor of the late Abdel Rahman El Sawy, the first Egyptian dean of the Faculty of Engineering at Cairo University, and awarded to the Public School Scholarship student with the highest grade point average in the engineering department.

The Mohamed M. El Beleidy Academic Award and the associated President’s Cup is given bi-annually to the graduating seniors with the highest grade point average. This June, it was awarded to five students: Amina Saleh, Dalia El Serafy, Darin Radwan, Miral Tawfik and Nourhan Sakr.

Fatema Niazy and Magda Keshk, economics graduates, were both awarded the Nadia Younes Award for Public and Humanitarian Service, which recognizes graduating seniors who have exhibited the highest commitment to community and humanitarian service. The Nadia Younes Memorial Fund was established at AUC in 2004 in memory of Nadia Younes, to recognize her accomplished career with the United Nations, her outstanding character and devotion to international relations and humanitarian service. Niazy and Keshk were both members of the Cairo International Model United Nations (CIMUN), among other clubs at AUC. “Upon my college admission, I decided to major in economics as I saw it to be the gateway to socioeconomic development and poverty alleviation work,” said Niazy. “I saw an opportunity to be further involved in sustainable development through CIMUN.”  While working at CIMUN, Niazy founded Yadawi (handmade) project, developing the skills of women through vocational training. Niazy was also the UNESCO director at the Model United Nations in 2012-2013, where she saw it as an opportunity to shape the minds of young students and expose them to world issues. Keshk worked with Niazy on the Yadawi project and was then appointed the Development Program head (2012 - 2013). She organized the first refugees CIMUN conference, inviting African refugees to discuss their experiences and learn about communication skills and the formality of their rights as refugees. “It was an amazing experience working with refugees because it gave us [the whole team] a different perspective of how refugees view themselves in the world they live in,” said Keshk.

AUC’s mission is to prepare students to become responsible and well-rounded citizens in order to face the challenges of the real world. This is achieved by guiding, mentoring and coaching them through vital research projects and extracurricular activities. That, in turn, enhances their capabilities, cultivates among them a sense of social responsibility and understanding of differences, and improves their academic and leadership skills. Named awards honor students for their accomplishments, motivating them to continue the good work they did at AUC in their future endeavors. AUC is proud of the quality of all of its graduates, which is a proof of the critical role AUC plays in educating and preparing future generations.