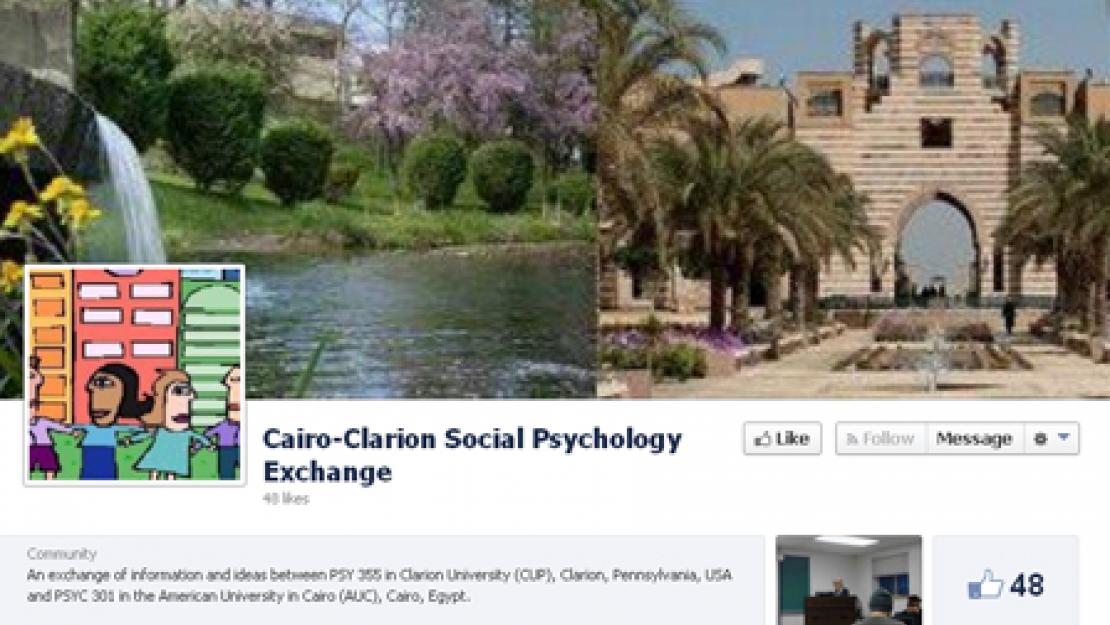 The Pew Research Center released a report in 2011, which found that many Muslims and Westerners hold negative stereotypes of the other. Recently, AUCians took on the challenge of combating these stereotypes and improving Muslim-West relations in a social psychology course taught by Carie Forden, psychology professor, and Amy Carrillo, former assistant professor of psychology. Bringing the West and the East together through social media, students from AUC and students at Clarion University in Pennsylvania collaborated to think of ways to reduce prejudice between Muslims and non-Muslims.

“Using social psychological principles that explain prejudice and social psychological principles of conflict resolution, students were asked to design interventions that would reduce prejudice between Muslims and non-Muslim westerners,” Forden explained. “These interventions were posted on a Facebook page, which allowed students from Egypt and the U.S. to talk about their plans back and forth.”

Forden and Carillo, who received the 2013 Social Action Teaching Award Honorable Mention from the Social Psychology Network for their efforts in this course, modeled the exchange so that students from each school would have to take on the perspective of the other. “We had AUC students design programs for the Americans, and Americans design programs for Egyptians,” Forden said. “The American students were asked: ‘How do Muslims view Americans, and what would enable them to see us more accurately?' and the Egyptian students were asked 'How do Americans view Muslims and what would enable them see us more accurately?' We were trying to get them to step into each other’s shoes.”

The students proposed ideas such as producing cartoons that would dispel stereotypes about Muslims, holding TED Talks with Muslim Americans to highlight the diversity and contributions of Muslims in America, and creating a pen pal program for American youth and non-American Muslim youth to get to know each other as individuals. As part of the award received by Forden and Carillo, the students’ assignment was featured on theSocial Psychology Network’s website.

According to students at AUC, this exchange was not only a forum for brainstorming ideas, but was an exercise in breaking stereotypes. “This exchange was important because it gave us the chance to defend ourselves against prejudices and implicit messages that people in the West always hear,” said Yasmine Amer, an integrated marketing communication senior. “It gave us as students a chance to represent ourselves to the other side. It was a relief, a good feeling.”

Similarly, students at Clarion University felt that they gained greater insight about a different culture. “Throughout the whole process, I must say that I learned so much about the other culture that I did not know, as well as learning so much about my own that I was unaware of,” said Amy Ferringer, a psychology senior at Clarion University. “It only takes that one voice, that one person, that one connection to change your view and make all the difference.”

Students were also struck by how similar they were. “I learned that our cultures have similar concerns and issues that affect society, such as government and media,” said Diana Winget, psychology junior at Clarion University. “In our exchange experience, I realized that even though we come from different cultural upbringings, we have very similar means of formulating our thoughts and attitudes toward these local and worldly concerns.”

Amer contends that these types of exchanges are a good first step in combating prejudices and hopes that AUC will provide other forums for cross-cultural interaction. “I think this is a good step forward,” Amer said. “And maybe in the future, there will be more opportunities for interacting.”

Forden is already planning a U.S.-AUC exchange for her community psychology course this semester, again making use of Facebook to facilitate the exchange. The AUC class will be working with a developmental psychology class at Clarion University to look at how culture could play a role in designing effective social programs for children. "Cross-cultural experiences are an important part of a good education.," Forden explained. "Not everyone can travel to another country easily, but these kinds of exchanges can give students the opportunity to learn about cultural differences even if they can't leave their homes."