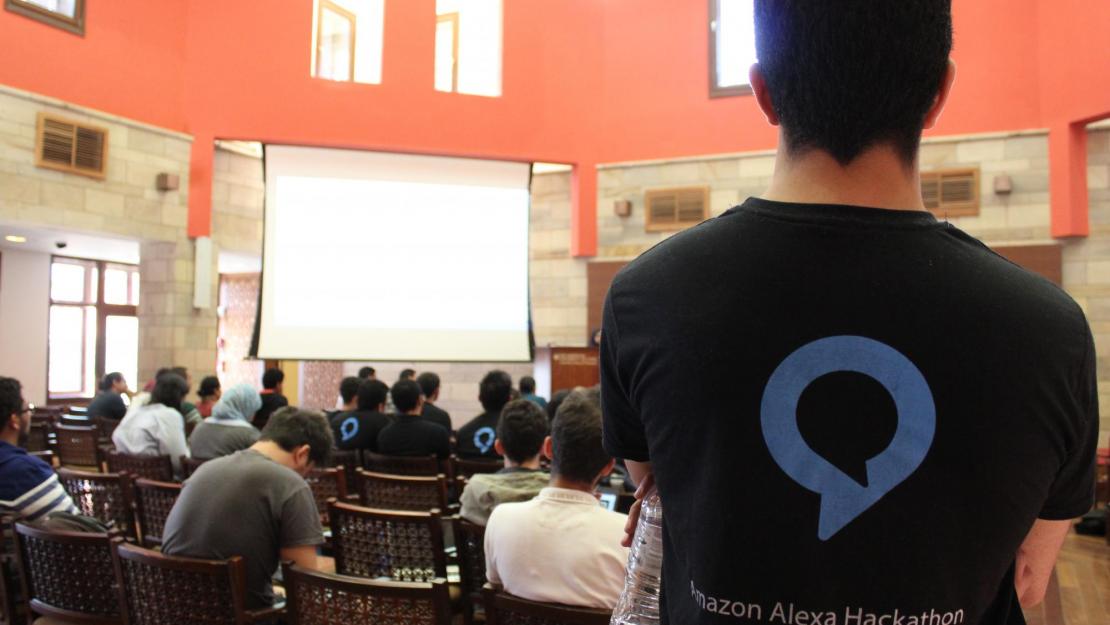 At the Amazon Alexa Hackathon, organized collaboratively by Amazon and AUC's Computer Science and Engineering Association, teams of AUC students and alumni designed new interactive functions for the artificially intelligent assistant, Alexa, developed by Amazon. The two winning teams received prizes from Amazon: the hands-free, voice-controlled Amazon Echo Dot for each member of the first-place team and a 30 GBP Amazon gift voucher for each member of the second-place team.

The aim of the competition was for participants to use their computer science and engineering knowledge to add new skills to Amazon’s Alexa, which is not only capable of voice interaction and control, but also plays music, answers questions, reads audio books, makes to-do-lists and provides news and real-time information on the weather, traffic, sports schedules and more, among a multitude of other functions.

“At Amazon, we care a lot about developing students and keeping them up-to-date with the latest technologies that we offer," said Mahmoud Dinana '13, AUC alum and software development engineer for Amazon's personalization team that is responsible for generating both personalized and non-personalized recommendations for Amazon customers across all devices. "We, thus, decided to organize the Alexa Hackathon event at AUC to expose students to voice technology –– one of the hottest technologies currently available on the market. Few people had heard of Alexa, as it is relatively unknown in Egypt. We believe that Alexa (Amazon’s smart home voice assistant) is the future of smart homes because using your voice is the most natural way to interact with technology.”

“Alexa responds to voice commands, which represent the current art of technology like S Voice and Siri in Samsung and iPhone,” said Aya Salama ’13, a computer engineering graduate and one of the first-place winners.

In addition to Salama, the first-place team was made up of Alia Morsi ’13, Ahmed Baracat ’14, Omar Ayad and Youssef Elsaie ’14. The smart skill they added to Alexa is related to Facebook events, allowing Alexa to access a Facebook account and schedule people’s upcoming events based on their preferences. In other words, when users tell Alexa their event preferences, it would regularly search for events that meet these preferences and present the options to the user.

The second-place team was made up of AUC students Ola Salama, Badr Elkhamissi, Youssef Nassar, Eman Hamed Shawky Ahmed, and Muhammed Nael Elnokrashy. The smart skill they added to Alexa is voice-based programming language that helps teach programming to Alexa users via the a voice tech interface.

Reflecting on the competition, Nassar, who is double majoring in computer science and actuarial science, said that "the environment was very helpful and competitive at the same time. Obviously, everyone wants to win but that didn't stop people from helping each other fix technical issues."

Salama views Alexa as a home assistant who can keep people company, which gives technology a human touch. “Talking to a machine makes us more humane toward technology,” said Salama, whose thesis focused on computer vision.

The hackathon gave Salama the chance to work on a new technology in a competitive environment. In addition to pursuing her graduate studies, Salama plans to participate in community service, tech-related activities and research, helping people with no background in the computer field. Her advice to students who are new to the field is to “get involved in several projects and be exposed to diverse technology platforms.”

For Morsi, a computer science graduate, Alexa is a new platform that will become a great user experience if more skills and features are added to it. Morsi was happy to win first place and commended the efforts all the teams, who performed well and had “the potential and capabilities to win.”

What draws Morsi to the field of computer science is its relevance to real-world needs. She encourages those who want to major in computer science to have a passion for the field and be aware that software development should be understood in a much deeper sense than just running an application.

An electronics engineering graduate with minors in computer science and economics, Baracat pursued his master’s in machine learning –– a part of artificial intelligence –– hopes to build a startup in Egypt that would adapt the art of research into machine learning and exploit its applications to provide services to people around the world, not just Egypt.

“Invade the field of computers and electronics,” he advises students, highlighting the importance of getting involved in projects and competitions from the beginning of one’s undergraduate years.

A fresh computer science graduate, Ayad, a full stack developer at Tutorama, had no real target in mind when he first entered the competition, but did not want to miss such an opportunity to try a new platform. He considers Alexa as an example of Internet of Things (IOT), which raises several privacy and security issues, since everything is controlled by a system that could potentially be misused. For him, the “massive” amount of information and data being collected by such system providers cannot be overlooked. “Look at the amount of data collected by Amazon when we use Alexa,” he noted.

His advice for new students in the field is to “stay updated with the world outside and the rapid change in technology and never restrict yourselves to the curriculum.”

Elsaie, a computer engineering graduate who works at Microsoft, does not just consider Alexa as a bot that uses voice technology, but also looks at it from the perspective of language understanding –– his field of specialty. He believes Alexa could open a new era of app competitions between developers to produce new voice technology programs.

Specialized in the field of computer vision and language understanding, Elsaie has applied his knowledge in the development of Cortana, another personal assistant created by Microsoft. He advises aspiring computer scientists and engineers “never to panic about the GPA or the academic courses and focus on professional projects in the fields they like.”