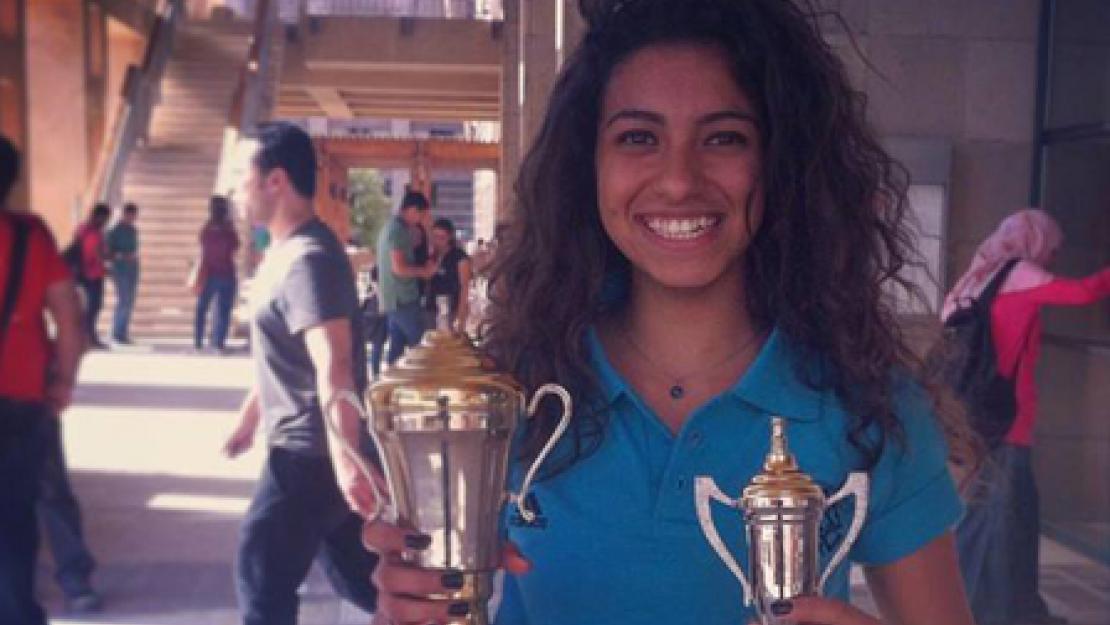 When Farida Salem was young, her parents encouraged her to play sports as a positive pastime that promotes health. The AUC sophomore is now an accomplished soccer player who cultivates her own skills while mentoring younger girls and pursing a degree at AUC.

“When I started playing soccer when I was 11, I played with boys because there weren’t a lot of girls playing,” Salem recalled. “My parents are both athletic, so they made me try out a lot of sports, but soccer is the one I chose. No one chose it for me. Now, when I play with girls, people say I stand out. Maybe there is something I picked up when I was younger from the boys, or it’s a talent, but it is where I shine. I’m just different.”

Salem started out playing for the Gezira Club’s boys team, then joined her junior varsity and varsity teams in school. She played professionally for the Wadi Degla Club’s under-21 team and a bit for their first team. Salem now plays semi-professionally for the Maadi Club, as well as with AUC. Salem has competed on the winning team five years in a row in annual tournaments at the Gezira Club and won the best player award in the 2009 tournament. She was awarded Most Outstanding Athlete at her high school in 2010 and was given the Best Player Award at AUC for the 2012 season. The AUC women’s soccer team won the National Universities Tournament, the most distinguished tournament in the country, in 2012.

In addition to playing herself, Salem coaches a girls soccer teams and serves as an advocate for female soccer players. “I’m working toward improving the situation in Egypt and dedicating my whole life for girls younger than me to have opportunities that I didn’t have,” she said. “I encouraged one of the girls I’m coaching to start a team in her school, where they’ve never had a girls team before. Change is made by starting with one person. I know that I’m only one person, but if I encourage another person to do something like start a team, then women’s soccer will definitely grow very fast. We have a lot more girls participating than we used to, so the situation is definitely getting better.”

One of Salem’s role models is a soccer star who has helped dismantle stereotypes about female athletes — Olympic gold medalist Alex Morgan of the U.S. national women’s team, who is also a model and published author. “People are starting to perceive the game in a different way now that she’s playing,” Salem noted, “because she’s different. She challenges the typical image of a female athlete. People think that we’re just tough, and we’re not in touch with our femininity, but she’s one of the most beautiful women in the field, and girls really look up to her. I like that she has a different side, not just her ‘soccer’ side.”

Like Morgan, Salem, an integrated marketing communications major with a minor in rhetoric and psychology, also has diverse interests. “I’m also a writer,” she said. “I like to release my negative energy into something, so I do this through soccer whenever I can, but when I can’t play, I write.”

Because she is a student at AUC, Salem battles the perception that she is not as serious about playing soccer professionally as athletes who go to national universities or forgo higher education completely. “Right now, I play for a semi-professional team,” she said. “I don’t play for a professional team, and I don’t get paid. It’s very difficult to get into a club because of bias against people who aren’t playing the game for the sake of making money. Coaches tell me they think I am just doing it for fun and that I am not going to play professionally, but I’d like to have the freedom to play the sport that I want and to be treated equally.”

Salem is working with Sahar El Hawary, head of women’s soccer in Egypt for FIFA, to recruit more women from diverse backgrounds to the national women’s team. “I want to be around the game in any way possible,” she affirmed. “I know that, in this sport, we are prone to injuries and obstacles like education and culture. There are people who think I can’t do this professionally, and it’s something I do in addition to my studies because I like to keep my feet on the ground. I understand that maybe it won’t be possible, but playing professionally abroad is my ultimate goal, and I will keep working toward it.”

In addition to playing semi-professionally, Salem works toward her goal of going pro, and toward combating stereotypes in sports, with the AUC women’s soccer team. “When we won the National Universities Tournament in 2012, the other universities teams never expected us to win because of the stereotypes about ‘AUC girls,’” she recalled. “They would make fun of us. Then we won the tournament, which resonated through the University, and we were interviewed on TV. I think we are revolutionizing the game. People think because we have other interests and we have our studies, we aren’t serious competitors, but we are proving them wrong.”