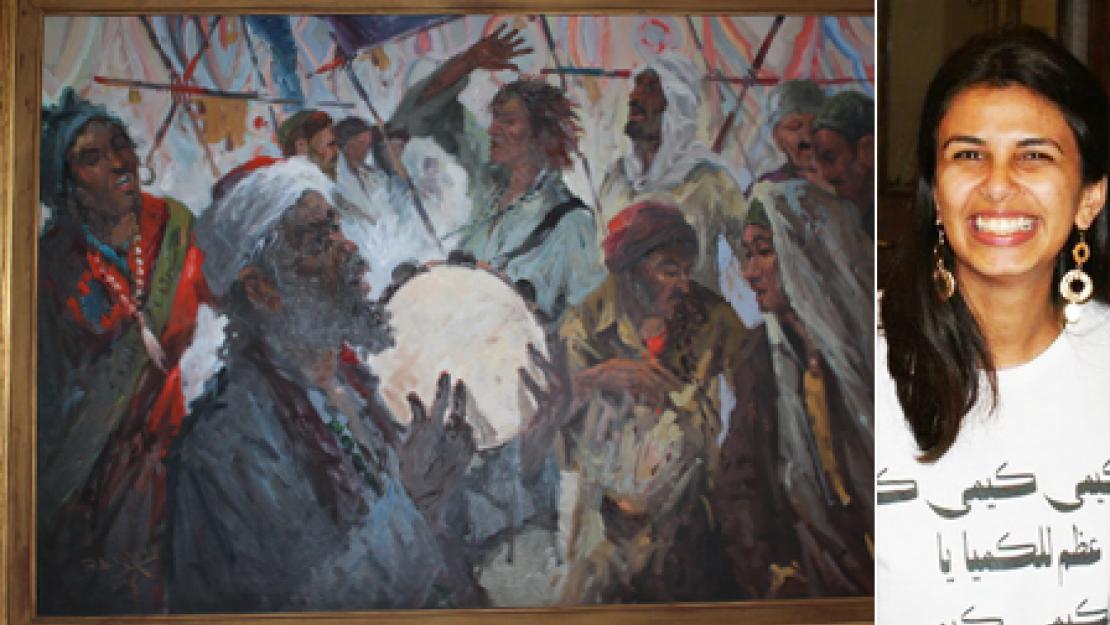 A chemistry student at school and an art lover at heart, Mayan Sabry, who graduated with a bachelor’s in chemistry last spring, has utilized her scientific knowledge to introduce mechanisms by which forged art may be identified. These methods involve a thorough analysis of the artist’s fingerprint –– the color palette.

As part of her undergraduate thesis, Sabry scientifically analyzed and chemically recorded the palette and pigments used by a modern Egyptian painter and Guiness-book artist, Taha El Korany. The eventual aim is to produce a first-of-its-kind database that would document the palettes and tools used by famous Egyptian artists to be able to distinguish between authentic and forged paintings, since claims have been made in the past that some paintings attributed to famous Egyptian artists have been forged.

“This experience has been intriguing because it blends scientific research with the captivating world of art,” Sabry said. “Never before has a database been established in the Arab world to serve a similar purpose. The need to document and preserve the authenticity of Arab artists is paramount.”

Through various instrumental techniques such as X-ray diffraction, fourier transform infrared spectroscopy, ultraviolet-visible spectroscopy and EDX, Sabry analyzed the composition of nine pigments frequently used in El Korany’s paintings, as well as two different binding materials. Sabry’s project is based on claims that some paintings attributed to famous Egyptian artists have been forged. In her thesis, Sabry refers to the paintings of Mahmoud Said, a famous Egyptian painter whose portrait, Girl with Green Eyes, appeared suddenly on sale at Christie’s in Dubai while it was known to be still hanging in the house of the Egyptian United Nations ambassador in New York. “It seems that two identical versions of this painting exist, one being the original and the other the forged,” explained Sabry. “If the palette of Mahmoud Said was available to us, one way of identifying the forgery would be to analyze the pigments in the two paintings and try to find out which of them had pigments that were uncharacteristic of his palette. Unfortunately, such a record is not available.”

Highlighting the importance of this project, Jehane Ragai, chemistry professor and Sabry’s thesis adviser, noted, “It is widely acknowledged that every painter has his or her own fingerprint in terms of pigments and binders used. The aim of Mayan’s project was the identification of the unique fingerprint of the prominent Egypt painter Taha El Korany as a first step to produce a database of the palette of famous artists in Egypt and the Arab world. The results so far have been promising, and we hope to produce a complete record of the pigments and binders used by El Korany in terms of composition and recorded spectra.”

Ragai added, “This work is important for future generations, as it will allow the detection of art forgery in works purported to belong to famous artists through the detection of pigments anachronistic or atypical to those used by the artists.”

Adham Ramadan, chair of the chemistry department, shared similar sentiments about the importance of Sabry’s research. “I believe Mayan’s work is significant in a number of aspects,” he said. “Firstly, its interdisciplinary nature, bridging the sciences and the arts is unique. It demonstrates how disciplines very different in nature and the approach to creativity can be complementary. Secondly, it is a project representing a first at AUC and in Egypt, where the palette of a modern Egyptian artist is analyzed and recorded. This has very important implications for modern Egyptian art, especially in the assertion of authenticity and the detection of any forgeries. In this respect, it demonstrates the role that chemistry can play in this regard.”

From the humanities standpoint, the artist’s philosophy and approach to art are a major focus of Sabry’s project, whereas the palette constitutes the tool for scientific analysis. In determining the originality of the artwork, the palette serves as a unique identification instrument for the artist. “The likelihood of coming across two artists who use the same materials and pigment combinations is close to nil,” noted Sabry. “Each artist uses a palette with a very unique composition. The challenge is, of course, being able to locate the palettes of artists who have passed away. This is why we sought to initiate work with artists who are still with us today.”

El Korany, who was present at Sabry’s thesis defense, appreciated the project because most art forgeries have so far been discovered through observations of surface layers rather than the study of the chemical composition. “This is a new idea for [El Korany] and one that he welcomed, as his works were forged several times,” noted Sabry. “This is the reason why he believes in the importance of fighting art forgery.”

As a scientist working in the field of art, there were social obstacles that Sabry had to overcome. “Science is definitely more appreciated than art within Egyptian society,” she said. “I am sure that not all chemistry students would accept a project like this. The vast majority of people in the field believe that theses based on a purely scientific project would look better on their résumés. This is a rather common perspective.”

Engaging in such a project has also taught Sabry about the importance of work-life relationships. “Having a deep relationship with your professor creates an inviting working environment,” she said. “While working with lab technicians, it was really interesting to figure out the different types of characters I had to deal with. Each person has his or her own nature, and it’s important to have a positive working relationship with everyone.”

The project, which Sabry hopes will evolve into a mega database for Arab artists, has taught her that perseverance is key. “If you really want to achieve something, you will always see all obstacles as interesting solvable riddles,” she affirmed. “Being ethical plays a major role in your sense of achievement as well.”

Sabry is moving on to pursue higher studies in art and is also considering the business prospects of her project. She has been recently accepted in the Art Direction program of Miami Ad School Europe and will be moving to Germany soon. “That way,” she said, “I will develop a solid background in both science and art. One of my main goals in life is to start a business combining art and science. This project is the first step in that direction.”