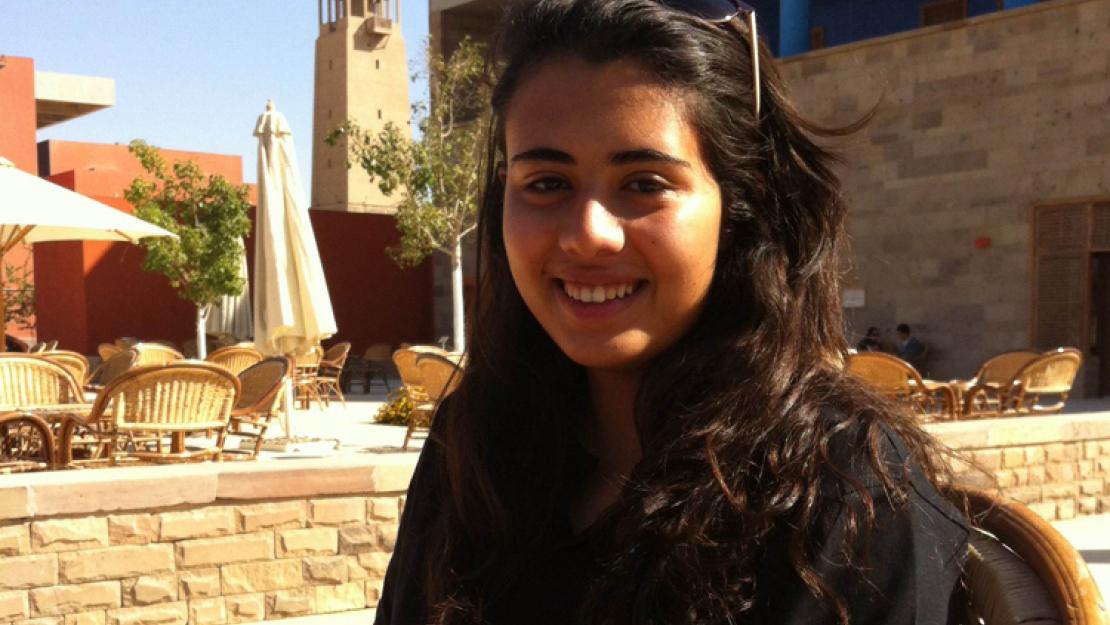 What is your major, GPA and year of study? I am enrolled in the honors program in the political science department, where I’m specializing in political economy. I’m also an economics and entrepreneurship minor. Why did you choose to apply to the student ambassador program? What attracted me the most was the professionalism. Later on, when I became a student ambassador, I enjoyed meeting well-known figures all the time. For example, I got to know Nabil El Araby personally and the governor of Aswan. I was also interested in planning events and lectures that were of interest to the AUC community and Egypt. What has been the highlight of your experiences with the program so far? In Spring 2013, I attended the meeting that we usually have at the end of each semester. An announcement was made that a cup for the “Most Distinguished Ambassador” would be presented, and I was surprised to know that I was the recipient of this cup. This was one of my most enjoyable and rewarding moments as a student ambassador. What is one of the most unforgettable activities that you took part in through the program? That would definitely be the last training we had as ambassadors given by the legendary Karim Saleh, the former coordinator of the Student Ambassador Program. He taught us how to deal with extreme crises such as fire and terrorism. He told us about gun attacks, weapons and how to minimize losses and protect others. After that, he gave us a speech I still remember to this day, about each and every single ambassador. As a student, how does it feel promoting the University to distinguished guests? I think we are the real mascots, but without the costume! What are the most important things that you learned from the student ambassador program? What I really learned from the program is to always pay attention to the small details because they really matter. From the time you receive an email to what you wear to how the event is carried out, everything has some sort of significance. What leadership activities have you participated in? I am in the Presidential Cabinet of Developers Inc., a student organization at AUC that I've been involved with for three years now. We provide personal development training to students and organizations through competitions and challenges. I've participated in numerous other activities inside and outside campus as well, especially with my Middle East Partnership Initiative (MEPI) scholarship coordinators. Within MEPI, we created a team that has actually qualified for the semifinals in the Hult Prize Global Case Challenge taking place in Sao Paolo in March. What interests do you have outside of school? Everything that requires moving around and being active. I love going out with my friends, playing sports and traveling. Why did you choose to come to AUC? I received a scholarship to attend AUC, and since I wanted to study political science, it only made sense to do so in my home country. I came to AUC in Fall 2010, only a few months before the revolution. Little did I know that I would be living my major! Which class at AUC have you enjoyed the most and why? I enjoyed Introduction to Entrepreneurship and Small Business Management because it was very different to what I'm used to studying and hearing in my political science courses. This class opened up opportunities for me and made me interested in social entrepreneurship. The professor, Ashraf Sheta, was beyond amazing and his passion for the subject was picked up by many of us. What is your main passion? I'm very passionate about personal development and awareness, which is Developers Inc. I love learning new things and giving others the opportunity to do so too. I believe that these are important for Egypt, especially since it is small-scale development that has a large impact. What are your future goals? I always had my future goals outlined clearly. Recently, I've changed my way of thinking. I no longer think about where I want to end, and instead I separate them. Future and goals are two separate things that should never be mixed. Life is too short for that. Always have goals for now, never later. The AUC Student Ambassador program includes a group of student volunteers dedicated to the positive promotion of the University. They are visible at many campus events and serve as liaison between guests and AUC community. The visitors are always interested in hearing student perspectives on life at AUC. To learn more about the program,click here.