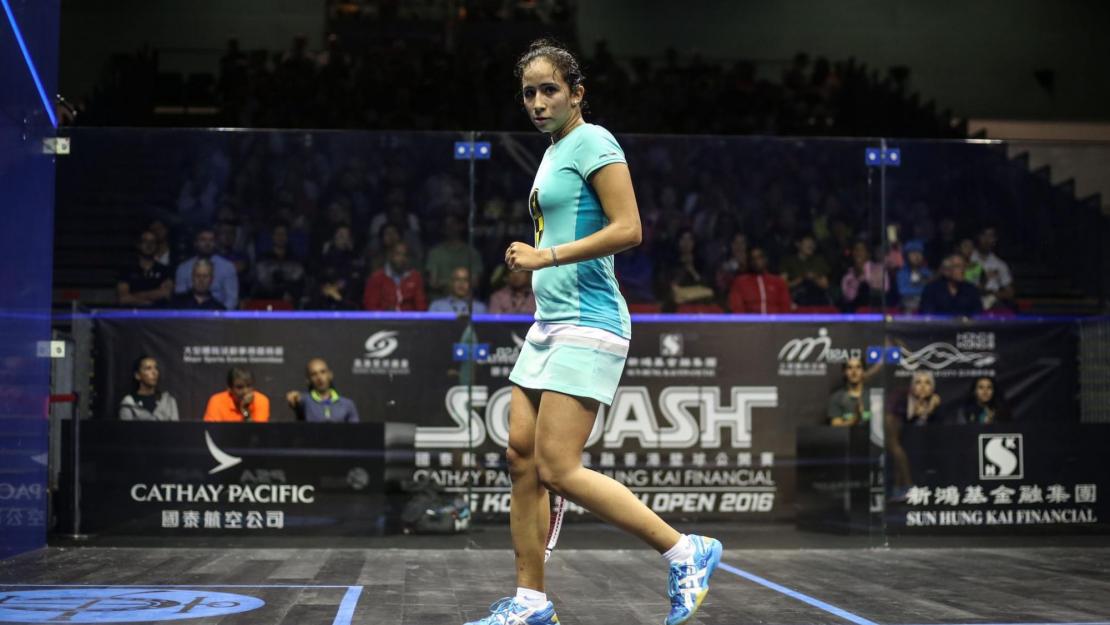 For the second consecutive year, Nouran Gohar, construction engineering sophomore and the first recipient of the Wadi Degla Scholarship, came in first at the World Squash Federation’s World Junior Squash Championships held in Poland last month. Ranking fourth globally, Gohar is the fourth woman worldwide to win this global championship more than once.

“Winning the World Junior Squash Championships title last year was a big achievement for me; winning it for the second year is a dream come true,” said Gohar. “I am thankful for AUC’s support because it has believed in my academic and sports capabilities all the way.”

Only 18 years old, Gohar is dominating the squash courts. Last month, she earned first place at the Hong Kong Squash Open 2016, defeating 10-time Malaysian champion Nicol David and the highest ranking American squash player Amanda Sobhy. Gohar’s outstanding performance was also witnessed at the 2016 China Squash Open held in September, where she won third place; the 2016 Women’s Allam British Open Squash Championship, where she was runner-up to Egyptian squash player Nour El Sherbini; and the 2016 Professional Squash Association (PSA) Dubai World Series Finals, earning first lead to the Dubai PSA Grand Finale to be held in June 2017. She is also a three-time winner of the British Junior Open, one of the most prestigious tournaments worldwide for junior players.

In Egypt, Gohar has been declared a national champion in all age groups (under 11,13,15,17 and 19). At AUC, she competed in the National Universities Tournament last spring and won a gold medal. “I was really pleased to represent AUC during the tournament,” she said. “I really wanted to win this title to make my University proud. It was a great feeling to earn a gold medal in my first University tournament.”

With her father playing squash as a hobby and her mother a table tennis champion, Gohar was influenced from an early age to become athletically active. “I started playing squash at the age of 8 and began taking part in competitions when I was 10 years old,” she recalled.

In addition to squash, Gohar’s interest in engineering also developed from her father, who is a mechanical engineer. “Growing up, I have always observed my father designing and developing mechanical systems,” she said. “This is one of the reasons why I feel more inclined toward scientific learning.”

Balancing her passion for squash with her academic studies is not easy, but Gohar said that the opportunity to study at “the best University in Egypt” with a full scholarship and to pursue her goals as an athlete push her to prioritize her needs. “There is no doubt that I want to become the world’s number one squash player,” she affirmed. “However, I need to be equally committed to my studies because a degree will always grant me a career. It’s all about planning and finding the right balance that works for you.”

For Gohar, not only has AUC given her extraordinary academic support, but it has also admired and celebrated her success as a professional athlete. “The Wadi Degla Scholarship is one of the main reasons I stayed in Egypt rather than leaving my family behind and studying abroad,” she said. “It helped me make the decision of majoring in the field I’m interested while also pursuing my dream of becoming the best female squash player. AUC’s faculty members and departments appreciate my efforts and are always willing to help me maintain an excellent performance in the classroom.”

Gohar is all geared up for her next tournaments –– the U.S. Open, to be held in Philadelphia from October 6 to 15; and Women’s World Championship in Paris, where she will be traveling with Egyptian national women’s team, to be held from November 25 to December 3.