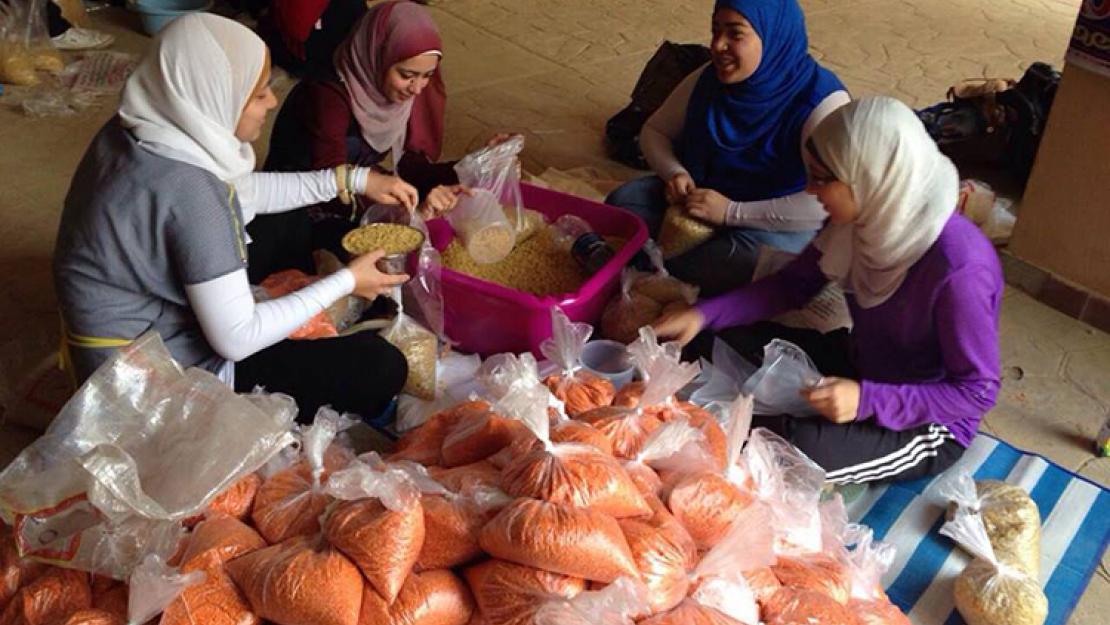 Culture of Giving in Ramadan
By
Staff Writer

“Community service and development is not a favor, but rather a duty,” said Taghreed Soliman, president of the Help Club.

With this mindset, student organizations have heightened their activities during Ramadan, distributing food packages and daily hot meals to the needy, as well as holding iftars for orphans, street children and underprivileged families. To view photos of the students, click here.

Community service clubs such as Volunteers in Action, Help Club and Glow have already collected donations and prepared food packages, which they have distributed at the beginning of the holy month. The packs contain basic food items such as rice, macaroni, sugar, black-eyed peas, lentils, beans, oil, ghee, tea, dates and tomato paste.

Glow, which was established at AUC six years ago, distributed more than 500 packages in the areas of Imbaba and Mansheyyet Nasser. “We not only distribute the packs, but buy the components, store them and then pack them ourselves with the help of volunteers,” said Basma Zaki, Glow’s president. “The packing days are usually very hectic, yet the end product always makes the effort worthwhile. After the packs are ready, we distribute them to families in need.”

Help Club members also purchased food items this year, putting together approximately 1,700 packages and distributing them in Masr El Adima, El Hamouly village in Fayyoum and areas in Upper Egypt. The club is collecting donations for a second round of bags to be packed and delivered during the rest of Ramadan. Help Club members are also distributing daily hot meals for people in Masr El Adima, where club members go each Friday to teach children there and engage them in interactive activities. Though the meals are usually purchased, they are sometimes cooked by the students themselves. Around 60 to 100 meals are distributed per day.

The Help Club also began work during Ramadan to build a 40,000-liter water purification station in El Hamouly village in Fayyoum, serving approximately 15,000 people using donations that were collected on campus. “We found out that nearly 38 percent of Egyptians suffer from kidney diseases, and Fayyoum is the Egyptian governorate with the highest number of kidney disease infections,” explained Soliman. “This is largely due to unclean water, which gets polluted from the leakage of sanitation waste. Stemming from our firm belief in social responsibility, we decided to raise donations to initiate this sustainable project that will serve an entire village in Egypt.”

The students raised enough money to not only build the station, but also operate and maintain it. They teamed up with Bedaya, a registered NGO, to help with the actual building and supervision of the project. “We paid a visit to El Hamouly village this Ramadan to distribute the food packs and see the site ourselves,” said Soliman.

Volunteers in Action (VIA), one of the oldest community service clubs on campus, distributed 2,300 food packages to different orphanages and underprivileged families in Meet Okba, Kafr Hakim and Ezbet Kheir Allah, according to Menna Elkholy, VIA’s president. Club members also delivered more than 260 hot iftar-to-go meals so far to various orphanages on a daily basis during Ramadan.

In addition to food packages and meals, VIA is also organizing iftars to ensure that underprivileged children and families enjoy the community spirit of Ramadan. The first iftar was held in Meet Okba, where VIA club members spent the day with women and 30 children from the area. During the event, VIA members spoke with women about the importance of education and encouraged them to join the club’s literacy program. Entertainment for children included a trampoline, face painting, competitions and a DJ. The AUC students then had iftar with the women and children.

The second iftar, to be held on July 10, is an annual event organized by VIA, whereby approximately 120 orphans are invited to AUC for “a day full of fun, laughter and games,” as Elkholy described it, including a DJ, magician and puppet show. “After playing with the children, we all sit altogether –– volunteers and orphans –– to eat our iftar meals,” Elkholi said. “We try to make them feel that we are one family and provide them with love and care as much as possible.”

In preparation for Eid El Fetr (Breaking of the Fast Feast), VIA club members will hold their annual keswa event on July 14, whereby donated clothes are displayed at a fair and children from different orphanages are invited to pick the clothes they want. “Such activities not only nurture our skills as students because we deal with different people such as orphans and underprivileged children and families, but they also help us gain leadership, communication and problem solving skills that help us in our daily lives,” said Elkholi. “As for the underprivileged families and orphans, the activities that VIA offers throughout the year help educate them and develop their personalities, and many of the projects allow them to have a sustainable income.”

Affirming that this culture of giving is of as much benefit to the students as it is to the underprivileged families and children, Soliman noted, “As much as these families need our help, we are in more need of this kind of involvement in our lives. We ‘need’ to be givers.”

In the end, it’s all about making a difference. “Glow aims to spread the idea of social responsibility among its members, as well as the entire community,” explained Zaki. “Such charitable activities help us realize that we are not living alone in this world and that we have a huge responsibility toward the place we live in. The effect of these activities has more value for us as Glowers more than the underprivileged families we support. They do, of course, get enough support during Ramadan, but we get to experience the feeling of having made a difference in someone’s life, realizing that an action as simple as putting a few macaroni pieces together in a bag would allow someone to go to bed with a smile on his or her face. And that, on its own, is priceless.”