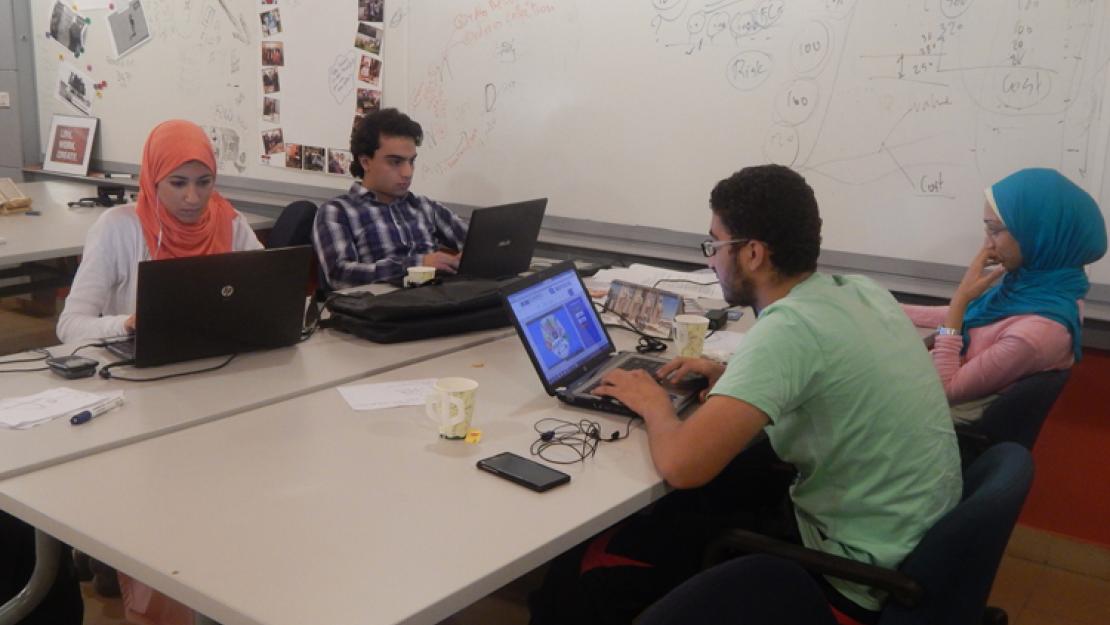 Everybody in Egypt, rich and poor, buys from kiosks. These small-scale shops are usually stacked with an abundance of products, but lack the aesthetics and mechanisms to become more profitable.
Tackling this issue, one of the startups incubated at the AUC Venture Lab’s second cycle, Kiosk Uplift, aims to redesign and revitalize Egypt’s kiosks within the next three years to be more attractive, profitable and support social projects such as recycling.
“The kiosk project is our first venture, but the idea behind Tatweer is that we work on any underdeveloped channels,” explained Tayssir Mohamed, head of sales and marketing at Tatweer. “The kiosks were the most obvious project to start with because they are extremely underdeveloped and unexploited in terms of the people who work in them and how these shops look.”

Tatweer is one of several startups with distinctive ideas that have been incubated at the AUC Venture Lab’s second cycle. Hosted by the University’s Entrepreneurship and Innovation Program, the AUC Venture Lab develops Egypt-based startups into marketable ventures, providing them with mentorship and business training by AUC faculty members and industry experts; connecting them with the University’s global network of alumni, academics, mentors and investors; and giving them access to work space, as well as University facilities and resources. Applications for the third cycle have been submitted, and a new cohort will be selected soon.

Concluding the second cycle, four startups –– including Tatweer –– are presenting their work on Demo Day, to be held on September 18. These are Bus Pooling, a fleet-based bus service for businesses and private users; Axology, which provides cost-efficient and effective custom solutions for companies and corporations that are seeking to improve their performance and quality control; Madad, a crowd-funding platform for donors to locate, support and track the execution of projects undertaken by Egyptian NGOs; and Double Vee, which positions itself as the first software testing firm in Egypt that is fully certified in functional, performance, operational and security testing services in line with international standards. Though different in their specific endeavors, all startups provide innovative services that offer solutions to common and overlooked challenges in Egyptian society.
“This is our latest effort here at AUC to empower entrepreneurs, to foster innovation and to fill existing gaps in the emerging entrepreneurial ecosystem in Egypt,” said Ayman Ismail, Abdul Latif Jameel Endowed Chair of Entrepreneurship at the School of Business. “Our aim is to capitalize on AUC’s intellectual capital and world-class resources, select a few high-potential innovative startups and help transform these teams into scalable companies.”
Tatweer is currently finalizing a protocol with the government, which would provide the startup with exclusive access to kiosks across 10 districts for a three-year period, during which they can refurbish as many as possible. “After that, the government will reopen those districts to other companies looking to do what we’re doing,” Mohamed said.
The redesigns of the kiosks won’t simply be about making them more pleasing to the eye, but rather introducing changes to make them more profitable and sustainable. “We’re being environmentally aware, so the materials we’re using provide isolation for the refrigerators so as to save energy, and we’ll also have ventilation space in the tops of the kiosks for natural ventilation to keep it cool for the people working there,” Mohamed said.
Social messages are also part of the renovation plan. “We’re going to be incorporating some public service announcements into the kiosks, so for example, we’re implementing something called the Culture Wall on each kiosk, where we’ll place anti-drug or anti-harassment slogans,” noted Mohamed. “Each week or month, we’ll be promoting a specific initiative. We’ll also have sorting and recycling waste cans that will be part of an environmental campaign. It’s a long-term plan, but we are keen on working with NGOs and other organizations to make it happen.”
Tatweer’s goal is simple in theory. “We go to the kiosk owners and tell them our plans to give them a new kiosk for free, and of course, they’re interested once they hear that,” Mohamed said. “All we take in return for our services are the advertising costs, and we give them a monthly kickback. So the owners don’t take any risks in terms of loss of advertising revenue. They get a new kiosk right away and, for five years, they are contractually entitled to free maintenance and services for the kiosk from Tatweer, and we also insure the kiosk against theft and damage. It’s really an offer they can’t refuse.”
Presently, the Tatweer team has been granted permission from the government to begin refurbishing five kiosks in the neighborhood of Maadi. Following this, they are hoping to expand into the rest of Cairo, with pilot programs for expansion into Giza and Alexandria.
“The project will take time, but many of the kiosk owners are willing and welcoming,” Mohamed said. “A lot of them are very young and even though they are doing well, they could do a lot better with some help. When they see our ideas, they like them a lot because then their kiosk will be something that they can be proud of and pass on to their kids.”
Mohamed added that the concept and legal recognition of kiosks was established during the presidency of Gamal Abdel Nasser, but has not evolved since. “Now, however, these kiosks represent a significant financial pool,” affirmed Mohamed. “Some kiosks we surveyed sell LE 5,000 worth of products a day. So they are no longer just small businesses like they used to be, but they don’t know how to promote themselves and they don’t have any power as individual units to negotiate with companies. A company like Tatweer could represent them and give them that power.”
Another startup incubated at AUC V-Lab’s second cycle is Bus Pooling, a service targeted at reducing the amount of traffic in Cairo and the overall impact on the environment from fuel consumption. “Cairo’s traffic jams cost Egypt $8 billion annually, according to the World Bank,” said Bus Pooling team members. “Most of this cost is due to accidents, lost opportunities due to the time lost in traffic, decrease in productivity and the fuel lost on idle cars.”
The team’s solution to this is a fleet of buses that drive customized routes across the city based on subscriber demand. Interested subscribers may sign up for the service through the startup’s website. “At first, people were very resistant to the idea because the culture of commuting with strangers is new in Egypt,” said the team. “But through the use of social media, as well as statistics and infographics, we have helped people realize the value of using this service.”

And this project is not only applicable in Egypt. “We have major international aspirations,” said Mohamed Ehab, chief executive officer of Bus Pooling. “This model can be applied to any city with poor transportation infrastructure and expensive taxis. We’ve found that our model is a solution to overcrowding by replacing 10 cars on the street with only one van. Only 3,000 subscribers riding with Bus Pooling would reduce the traffic crush on the 26th of July corridor by more than three kilometers.”

On the other side of the spectrum, Axology has been working on the design and production of business-specific accessories such as mobile protection cases and custom display case locks for Egypt’s mobile industry. One of Axology’s biggest clients so far has been Vodafone, for which the team designed security locks and phone cases that could be used to protect mobiles from damage during shipment.
“Currently, we are focused on developing accessories and solutions for three industries: security, cargo handling and printing production,” the team explained. “We tailor-made an anti-shock protector for Vodafone to keep mobiles safe during shipping. The protector absorbs shocks from falls of up to 10 meters, keeping the mobile inside it from suffering any sort of damage. Our vision at Axology is to be the first choice for businesses that need customized products in Egypt. In the future, we plan to expand to the rest of the Middle East and North African region.”

Photo caption: At the AUC V-Lab, young entrepreneurs are provided with mentorship and business training to develop their startup ideas into marketable ventures