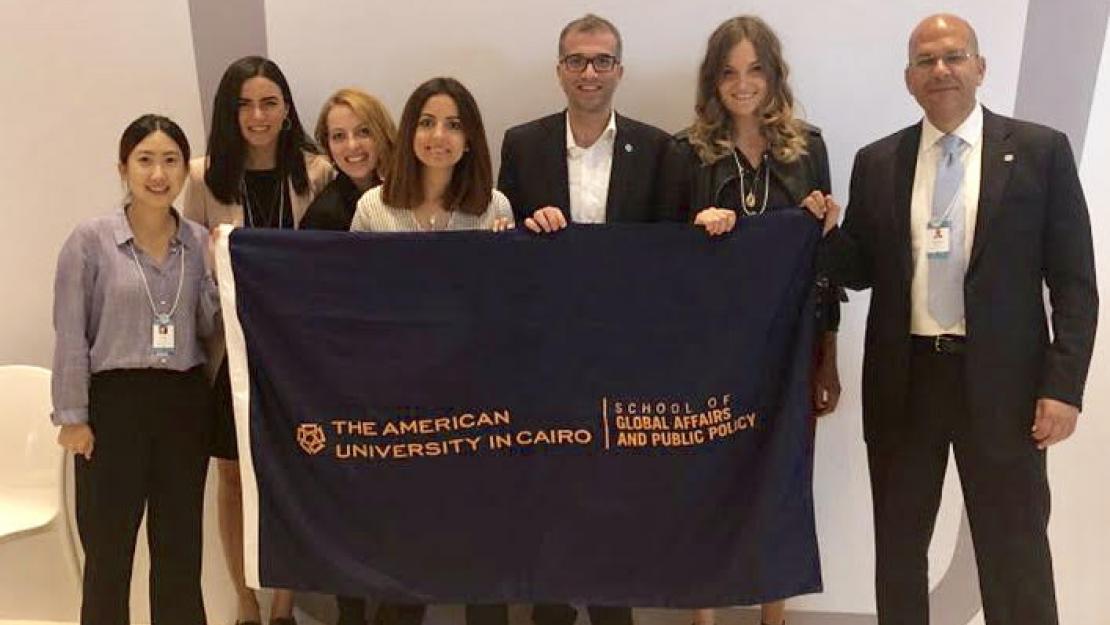 Six AUC graduate students in the School of Global Affairs and Public Policy (GAPP) participated in the World Government Summit – Global Universities Challenge, held in Dubai. AUC was the only University to represent Egypt at the summit and was one of only two teams from the Middle East.

Titled Shaping Future Governments, the four-day summit gathered more than 100 students from 17 universities to solicit their input on the role of governments and their shared future, and challenged them to consider how to approach foreseeable international changes. Each university team presented a roadmap outlining how the United Arab Emirates should achieve its Centennial 2071 goals, making suggestions to improve the education system and incorporate new technologies as well as other initiatives, like space exploration, mining and strategies to achieve universal financial hub status.

The process of being admitted to the summit was a selective one. After the School of GAPP chose students based on their CVs, the team had to submit a white paper to the summit on Preventing Radicalization Through Community Resilience in the Middle East and North Africa for consideration to participate in the competition itself.

“It was important for [AUC] to be there because we are in the Middle East, and we will graduate as future leaders who could perhaps draft better policies and come up with solid research for our region,” said El Moghazi. “The summit was [a positive] exposure for our University to be among top global universities and receive an exclusive invitation.”

Artificial Intelligence: The Road to the Future

The summit’s theme focused on the great amount of development expected to unfold in the next 30 years. The challenge revolved around artificial intelligence as an integral part of future life and assumed programming as the main source of wealth –– comparable to oil today.

“The idea was that governments should take a new approach to education and that programming should be the language of the future,” noted El Moghazi. “It gives world governments a phenomenal view of how the future will look like and ideas for how to deal with the coming wave of evolution, which is artificial intelligence and technology.”

Students stepped into the shoes of advisers to Sheikh Mohammed bin Rashid Al Maktoum, vice president and prime minister of the United Arab Emirates and ruler of Dubai, as they considered achievements that will have been made by the year 2031. With a sense of what the world and the United Arab Emirates might look like at this time, teams then made plans for development toward the country’s vision of 2071, specifically looking at education, the economy, happiness and the government. The ultimate goal was to build toward a knowledge-based economy in the United Arab Emirates. Each team had just six minutes to present its vision and roadmap.

In addition to helping world government leaders get in tune with young voices and visions of the future, the summit offered a major developmental experience for participating students. Student attendees were able to hear from more than 130 speakers over the four-day event.

“There were so many students, government officials, business owners, professors, and so on from all over the world,” reflected Kim. “It was such an awakening experience to observe a country, which was united not so long ago in 1971, host such an event and to see how different approaches could be taken to prepare humanity for the future.”

The AUC team interacted with a range of individuals participating in different summit sessions. University student leaders were among 4,000 participants from 140 countries overall. “It was interesting to see how ambitious the United Arab Emirates was to develop in terms of every aspect, like education, government services, smart cities and even space programs,” said Kim. “Apart from learning, it also gave a sense of worldwide attachment to everyone who attended –– a sense of responsibility for all.”

Coming from different areas of concentration in the School of GAPP –– public policy, public administration, global affairs and Middle East studies –– many of the students weren’t familiar with one another before the competition. Aside from exposing these AUC graduate students to peers and leaders from other countries, the summit and challenge gave them an opportunity to engage in an internally interdisciplinary experience as well.

Hegazy likened the summit to a case study experience that allowed student participants to meet individuals of diverse backgrounds and professions, each involved in decision-making processes that affect governments and global developments. The summit gave her a sense of ways in which governments and other stakeholders can have an impact on the entire globe. “A summit like this represents a great exposure for students, especially those hoping to build a career in public policy and administration and become future leaders in Egypt or elsewhere,” said Hegazy. “It was a truly eye-opening experience. It gives participants a view on what the future will look like, changes taking place now and what all of us need to be doing now to be able to shape a better future.”