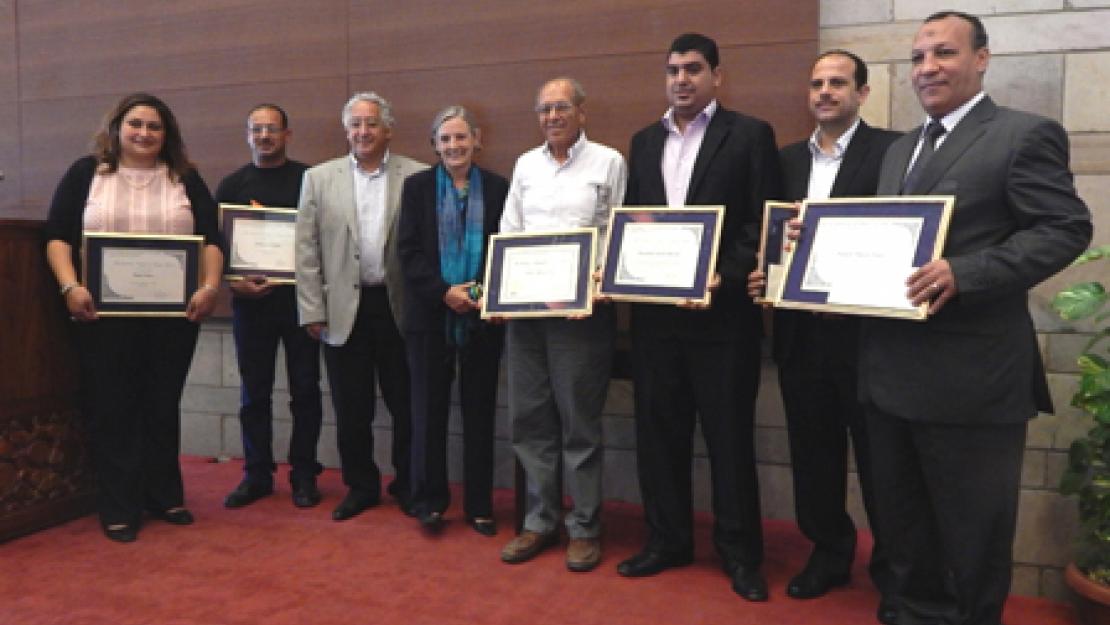 Six outstanding AUC staff members and administrators were honored with the President’s Catalyst for Change Awards during the University Forum yesterday, in recognition of their contributions to the AUC community. In addition, the President’s Distinguished Service Award was presented to Mahmoud Farag, director of Engineering and Science Services, for his years of service and dedication.

The Catalyst for Change awards were given in three categories — Citizenship and Service, Innovation and Impact, and Management with Sustainability and Integrity. Award winners were nominated by their colleagues and were chosen by a selection committee.

Mohamed Sobhy of environmental services was one of two recipients of the Citizenship and Service Award. During his routine cleaning duties in one of the halls at the University, Sobhy found a bag containing a student’s tuition payment, in cash. “Upon realizing this, he took the necessary steps to return the bag, with the money, to its proper owner, and we are pleased to award him today to honor his honesty and integrity,” said President Lisa Anderson.

For Sobhy, the award was unexpected. “I am very happy to be recognized by the University; it’s a pleasant surprise,” said Sobhy. “Honesty is very important in any workplace. When you are honest, God blesses everything around you. If I am faced with a similar situation, I’ll do exactly the same thing. It’s all about ethics.”

Also receiving the Citizenship and Service Award was Sulaf Taha, assistant director of the Leadership for Education and Development and Middle East Partnership Initiative - Tomorrow’s Leaders programs to recognize her generosity in volunteering to help at forums and discussions throughout the year. “Over the past year, the University has faced a number of unanticipated challenges,” noted Anderson. “As the community rose to the occasion, she stands out for ensuring that all AUC community members could participate in these University-wide consultations. This semester, she has served as a translator at numerous forums and discussions, and, most significantly of all, did so as a volunteer.”

Taha explained that she volunteered to serve as an translator at the University's forums as an example of how AUC can utilize its internal resources to help cut the deficit. "In one particular incident, my interpreting proved to be useful as I helped non-English speaking workers convey their message to the upper management and have their voices heard; this, in turn, helped avoid potential problems of misunderstanding," Taha said. “I feel proud and grateful for such recognition. And I think that what this award shows is that no matter how small your contribution is, it can be valuable to the community and it will be valued."

Provost Amr Shaarawi was honored with the Innovation and Impact Award for stepping in and serving the University after the tragic loss of Medhat Haroun, who served as provost from January 2011 to October 2012. “Provost Shaarawi did not ask for this post, and he could have approached it as a caretaker, but throughout his tenure, he addressed numerous challenges with flexibility, integrity and good humor, and has consistently given far more to this University than was ever asked of him,” Anderson remarked. “He left the provost’s office and the faculty stronger than he found them, which is the highest testament to his service.”

"I am very appreciative of this recognition, especially that it is given for innovation and impact," said Shaarawi. "It was a responsibility that I carried without thinking about the impact that I can have. It turned out to be a transforming experience that gave me an opportunity to work with exceptional educators and scholars, brilliant students and great staff members. I am indebted to all of them and their efforts to make AUC the outstanding University that it has become."

The Management with Sustainability and Integrity Award was given to three members of the housekeeping staff for their innovative and committed problem solving. When Mohsen Ahmed Farhat, Ramadan Sayed Ahmed and Khaled Ahmed Saleh discovered that several wooden partitions had been badly damaged and would require an expensive solution to fix them, they investigated an alternative means of repair. Using pre-existing cleaning supplies, Farhat, Ahmed and Saleh tested several different solution combinations until they succeeded in producing an agent to repair the damage. “Their persistence and creativity, if implemented across the University, could potentially save significant funds,” Anderson affirmed. “Their entrepreneurial spirit truly defines the spirit of this institution.”

“We love AUC and love the AUC community, so we had to do something to save the University unnecessary extra costs,” said Saleh. “It has been preoccupying our minds for so long, and we are happy to serve AUC this way.”

Sharing the same sentiments, Farhat noted, “We hope to have added value to the University, and it is an honor and a pleasure to be recognized today.”

The President’s Distinguished Service Award was presented to Mahmoud Farag, director of Engineering and Science Services, upon his retirement from the University Senate after more than a decade of service, during which he served as chair of the curriculum and faculty affairs committees. A new faculty handbook and retirement policy have been drafted this year under his leadership and will always have his imprint on them, as noted by President Anderson, who also praised Farag’s “persistence, dedication and unflagging commitment to integrity.”

“It was a complete surprise to receive this award,” Farag said. “It is very pleasant after 14 years of service to AUC to be recognized so nicely by the president.”