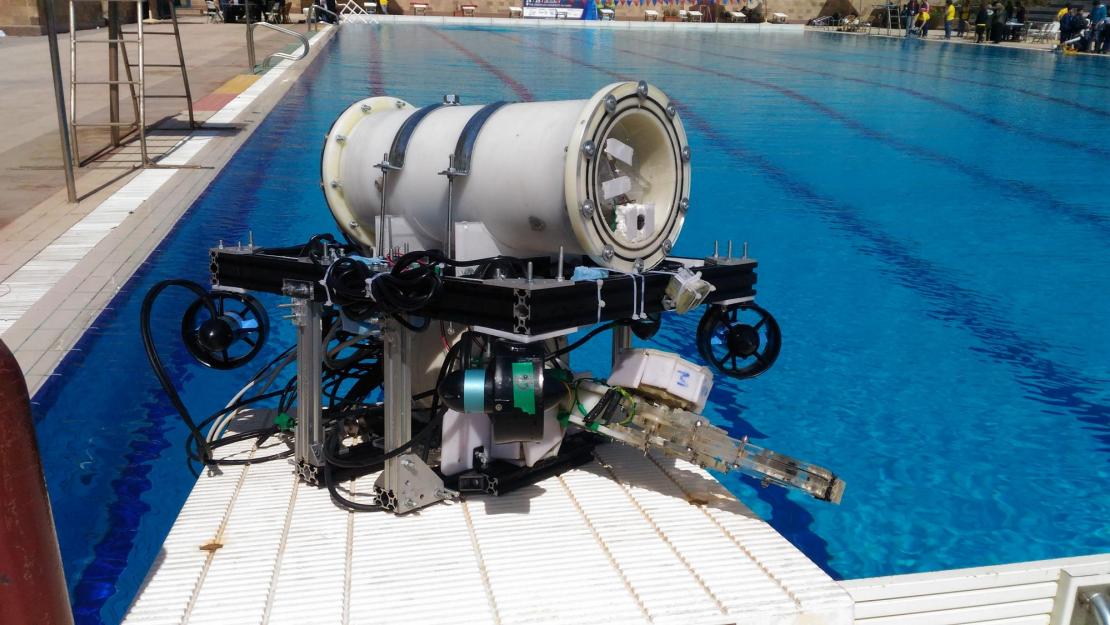 Building an underwater robot, AUC’s Robotix club recently won the local round of Remotely Operated Vehicle (ROV), an international robotics competition organized by Marine Advanced Technology Education. The team now qualifies for the regional finals, to be held in Alexandria on April 6. This is the first year that AUC hosts a robotics competition, inviting universities to participate in the local round of ROV.

This year's challenge for the Explorer level, or university level, of the competition is to build a robot that can replace a broken fountain. The robot must be able to go underwater, disconnect the power cable and stop the flow of water by turning a valve. Once the new fountain is installed, the robot must then be able to restore the flow of water.

Mohamed Gamal AbdelShafi, vice president of operations for the club and electronics and communications engineering major, views this as a significant opportunity for the University to shift toward further emphasizing technical skills. “This is the first step toward engaging the AUC community in tech-related events and competitions,” explained AbdelShafi.

AbdelShafi feels that tech and science are important parts of the student experience at a liberal arts university like AUC. It’s important to “integrate all sciences, along with social sciences and business.”

Preparing for the competition required an immense amount of team effort. The entire team was divided into sub-teams and assigned tasks to accomplish each week. “Dr. Hassan El-Fawal [dean of the School of Sciences and Engineering] was a great support,” AbdelShafi noted, adding that Dean El-Fawal was critical in helping recruit students for the club and competition.

The club is composed of four academic levels - basic, intermediate, amateur and advanced – all of which include internal competitions of their own and various levels of complexity in building robots. Members from each level who were interested and passionate about joining the competition were recruited to take part in the ROV competition.

Last year, 2016, was the first time AUC’s Robotix club qualified for the regional competition. AbdelShafi noted that the challenge for the club, moving forward, will be competing with schools that have been active in the competition for several years now.