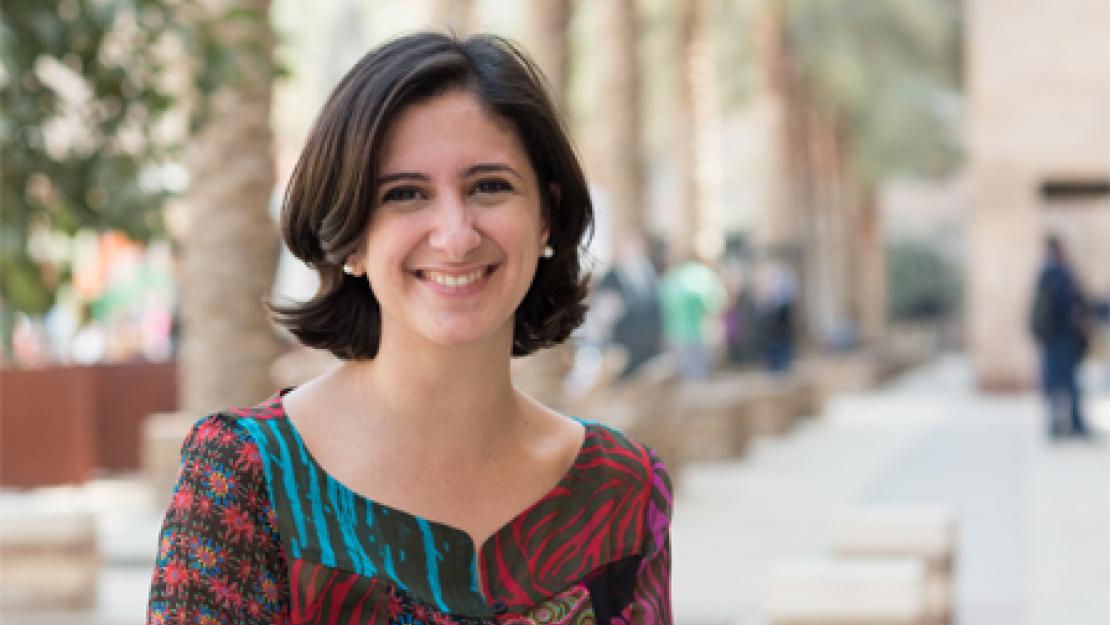 In spite of a rich artistic history, Arabic script has had difficulty transitioning into a digital format for use in graphic design. Currently, there are around 500 Arabic fonts, compared to more than 72,000 fonts and counting in Latin script.

“For Arabic, as well as other Eastern languages like Japanese, there have been problems digitizing a very rich calligraphic history,” said Bahia Shehab, associate professor of practice in the Department of the Arts and founder of AUC’s graphic design program. “When you look at calligraphy historically, you find really gorgeous examples of the manuscripts and writings on buildings and other mediums, but when you look at any computer-generated artwork in Arabic, it’s usually below average, to say the least.”

The Arabic alphabet evolved from the script of the ancient Nabataeans, Semitic people who inhabited the Levant and northern Saudi peninsula. “There wasn’t a big tradition of writing before Islam in the region,” explained Shehab. “The Arabic language was orally transmitted, aside from ledgers recording trade transactions, which are the earliest examples of Arabic script.”

The development of a written language became essential with the birth of Islam in the seventh century. “It was necessary to preserve the word of God and transmit it to other newly conquered parts of the empire,” Shehab said. “The earliest Arabic used by followers of Prophet Muhammad to compile the Quran was Kufic, which was an angular script.”

The script then evolved through religious manuscripts and inscriptions, and, “Kufic gradually fell out of favor,” said Shehab. “There were developments in the shapes of the letters, and the cursive script appeared because this was believed to be more legible.”

The development of Arabic script fell behind Latin during the Ottoman era, as the Ottomans continued to employ calligraphers to handwrite documents, while Western societies transitioned to the printing press. “When the digital revolution began, it was easy for European languages to adjust, while Arabic had never truly adapted to the printing press in the first place, so it was poorly equipped for the digital world,” said Shehab. “As a result, the fonts we have are badly adapted copies of a 1,000-year-old script. The last calligraphers who tried to innovate, codify or redesign the Arabic script were Ibn Bawwab and Ibn Muqlah, both of whom died more than 1,000 years ago.”

Because the fonts available to Arabic designers are limited, this, in turn, limits possibilities for expression. “Let’s say I want to design a headline for a TV commercial, and I am advertising a product that is modern and feminine,” said Shehab. “There is no script or font in Arabic that is modern and feminine. I have to create it. I either have to commission a calligrapher or I have to draw it myself because the fonts do not cater to these needs. There aren’t enough fonts catering to the needs of a modern designer in the Arab world. There isn’t enough variety of expression in terms of font design.”

In spite of the importance of fonts, most designers have only become aware of this problem in the last 10 or 15 years. “The main tool that any designer needs to use in design is typography, the computer fonts,” she noted. “Ninety percent of what we design needs typography because if you’re designing a package, it needs to have a label with the name of the product and the ingredients. If you’re designing a poster, the poster needs a headline, sub-headline and body text. The problem is not that Arabic is more difficult to capture. Arabic script consists of three to four shapes per letter, which change depending on where the letter is in the word. That means to design an Arabic font, the work is triple or quadruple that required to design a Latin font.”

This workload is daunting to many designers, Shehab affirmed. “There’s nobody investing the time because it takes around a year for any designer to design a good font, and there aren’t many people interested,” she said. “Most of the Arabic fonts were developed by people who do not necessarily speak Arabic, or by big Western companies who employ Arab designers and see this as a business opportunity.”

It is reasonable for Western companies to jump on this opportunity, Shehab argued, because, “when you don’t develop yourself, someone else is going to come along and do it for you. Arabic is the third script in use in the world after Latin and Chinese. It is used by nearly 380 million people, from Morocco to Iraq, and from Iraq to the edges of India. All these people use the Arabic script for their language. This is a huge number of people. That’s very good business.”

However, Shehab pointed out, the tide is beginning to turn as more Arabic designers become interested in font development. “Some calligraphers and designers from the Arab world have collaborated with big companies, which is wonderful,” she said. “These collaborations have helped move us forward and have created awareness of the problem. We are building on their solutions, but it is time consuming to build culture.”

To address that issue, Shehab is drawing on the wealth of examples of Arabic calligraphy, from pottery to Quranic manuscripts and architecture, in order to produce an encyclopedia of the Arabic script, comprising 1,000 examples of each Arabic letter from the past 1,400 years. She has already compiled 1,000 examples of the lam and alif letters for her book, A Thousand Nos. “The book contains 1,000 examples by different designers and calligraphers in history, who were trying to solve the same problem, which is how to draw a letter,” Shehab explained. “For any designer to design a good font, they need a visual reference to work from. This encyclopedia will give modern designers a peek into their history so they can plan their path accordingly.” Technological advances are also producing new possibilities for streamlined font creation. “Now there is intelligent software being developed that will create a font if you feed it shapes,” Shehab said. “I am hoping to find a formula to generate fonts from the thousands of images I am collecting. We could get to a point where we don’t need designers to create fonts.” Coming face to face with the richness and variety of the Arabic calligraphic tradition would serve to empower designers and inspire further innovation, Shehab argued. “A Thousand Nos was a turning point in my life because being able to hang these letters on one wall and look at them was quite empowering,” she recalled. “This is just one letter, and it is so rich and varied and creative and magnificent. As Arab designers, we need to reconnect with our heritage. You can’t go anywhere if you don’t know where you came from.”