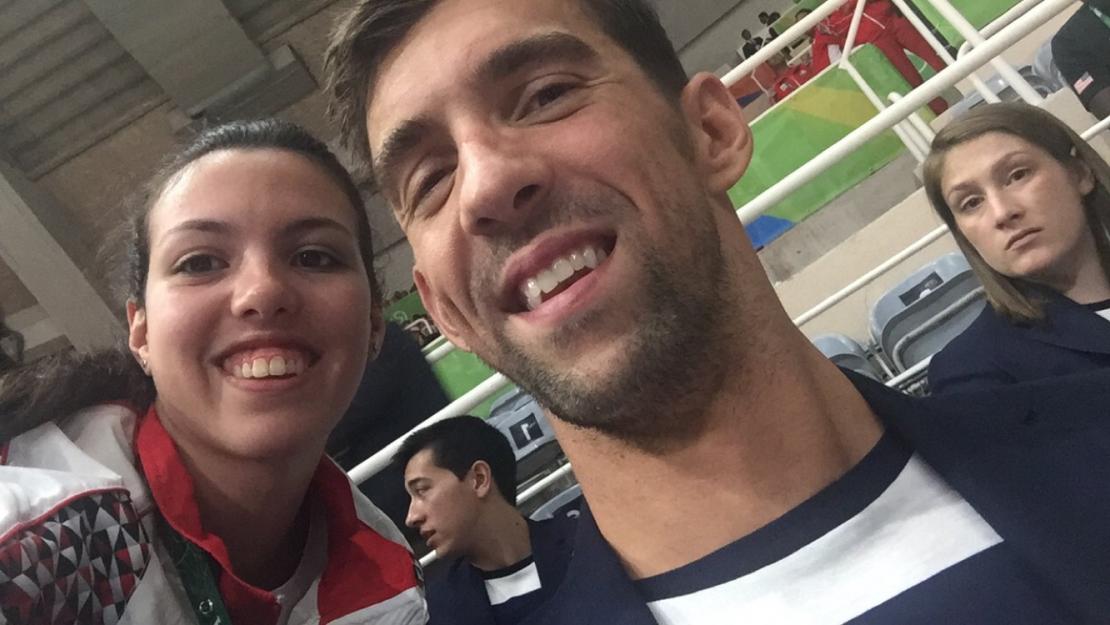 Six members of the AUC community - all women - have returned home from the 2016 Olympics in Rio de Janeiro, Brazil full of pride, determination and a hunger for continued success.

Abdel Moez, an architectural engineering junior who competed in synchronized swimming (technical and free), thinks back on her time in Rio. “The best moment was after I finished the second routine and was standing on the podium waiting for our score and seeing in the eye of my coach how happy and proud she was,” said Abdel Moez.

Despite her team’s historic victory against Australia and seventh-place finish, Abdel Moez is not slowing down anytime soon. “This experience will help me to always push for a bigger dream,” she said.

Hagrass also represented one half of Egypt’s synchronized swimming duet, finishing 23rd in the overall ranking. An AUC junior studying business administration, Hagrass worked tirelessly to get to the Olympic Games. "I feel very lucky and proud that I participated in the Olympics," she said. "People sometimes give up, but I kept pursuing my dream."

That hard work definitely paid off. As Ahmed recalled, "No matter how difficult or stressed you are, the experience itself is wonderful. It's worth it."

For economics alumna, Reem Mansour ’15, who competed in archery, the 2016 Olympics was, among many things, an invaluable learning experience. “The main lesson I learned from Rio is that it is absolutely necessary to take yourself out of your comfort zone and constantly challenge yourself," she noted. "Physical preparation is not nearly enough. Mental preparation is essential.”

Mansour’s ambition to compete in the Olympics began long before her 56th-place finish at the 2016 games. “I felt proud to have accomplished a goal that I had set when I was 11 years old,” she said.

The Olympics were not without challenges for AUC junior Reem Kassem who competed in the 10km open-water swim, finishing in 25th place. “It was the toughest race I ever did due to the high tide, waves in the arena and, of course, one of the toughest competitors I ever competed with,” she said.

That challenge, however, only further encouraged Kassem. As the first Egyptian and Arab woman to qualify for the 10k open-water swim, she is determined to “set higher goals and keep pursuing the sport I love.” And, of course, Kassem’s Olympic experience would not have been complete without meeting her role models, gold medalist swimmers Michael Phelps and Katie Ledecky.

Reflecting on the most memorable moments of an unforgettable experience competing for the Egyptian Women's Table Tennis Team,  Ashraf, a junior majoring in accounting, noted, “It was my first time, so I think the best moment was being able to be with athletes from all the other sports and taking pictures with them. I met [swimmer] Michael Phelps, [tennis players] Rafael Nadal and Novak Djokovic. I also watched [sprinter] Usain Bolt compete.”

For her cousin and table tennis teammate Meshref, a senior studying business administration, her most distinct memory from the competition was proudly representing her country. “The most memorable part of Rio was the day we raised the Egyptian flag,” she said. “We all went to the Olympic village for a gathering in the plaza. It was really nice and also fun.”

At a groundbreaking Olympic Games for Egyptian and Arab women worldwide, these six female athletes represented their country and AUC with courage and dignity. Whether in athletics or academics, the stories of these tenacious competitors will undoubtedly be filled with future victories.

To read more about the six athletes and their journeys to the 2016 Olympics, click here.