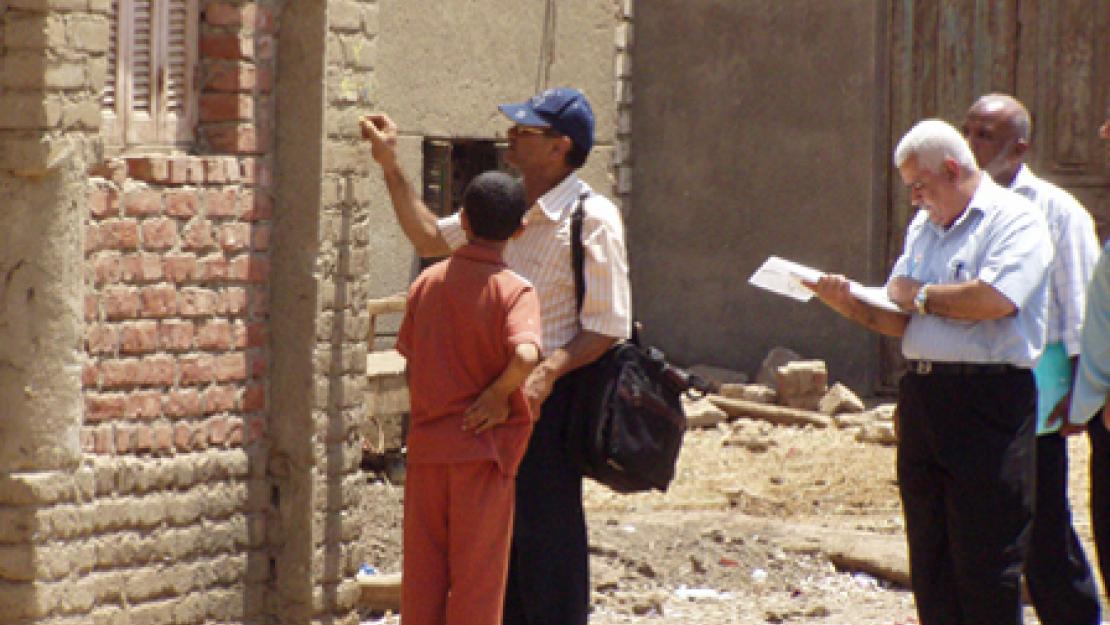 Fayyoum governorate in Upper Egypt is one of the poorest in Egypt, with a low literacy and employment rate, and a population of nearly 2.7 million. The rural governorate has also been the site of continuing unrest in the last two and a half years since the January 25 Revolution. One of the greatest public health concerns in Fayyoum is water-borne illness due to extensive irrigation to maintain agriculture and inadequate sanitation. The number of houses in Fayyoum connected to the water supply has jumped from 10 percent in 1990 to 93 percent in 2009, largely due to a project spearheaded by the government of the Netherlands aiming to raise the level of health by increasing water access and safety in the governorate. However, an impact study conducted by AUC’s Social Research Center (SRC) on the project found that, while the Netherlands initiative had improved the quality of the tap water in Fayyoum, it had done little to alleviate problems associated with water pressure and sanitation.

“More houses had access to water and the health situation was better, but there are still problems with the sanitation facilities in Fayyoum, as many pipes were broken and wastewater flows in the streets,” said Ramadan Hamed, research professor at the SRC who served as principal investigator on the impact report.

The SRC conducted a baseline survey, followed by a second survey after the implementation of the Netherlands government project to determine the success of the intervention. SRC researchers collected data from households regarding their economic and social level, their access to drinking water and the quality of that water, as well as whether or not it was available throughout the day. They also visited around 1,500 households, and collected data from schools and health clinics on water-related diseases in the area. A chemical lab in the governorate also tested samples of water from various locations to determine its quality.

The study found that one of the greatest problems with regard to water access and safety was low water pressure. While the number of people who had water pumped into their households drastically increased, 81 percent of the households surveyed by the SRC reported that their water pressure was only adequate at night, while during the day, the pressure was either low or –– in many cases –– nothing came out of the taps. A mere 3 percent said that they had strong water pressure all the time. “This means that the majority of people in these villages do not have safe drinking water all day,” Hamed said. “They use either water from storage or water from other sources, such as canals or groundwater. All of these sources have health risks.”

To deal with this issue, most of the households store tap water when the water pressure is low, causing what is initially safe water to become contaminated. The level of chlorine in the water when it comes out of the tap is high enough for it to be safe, but this decreases as it is stored, causing levels of bacterial contamination to increase. Chemical residues from the containers in which the water is stored cause further contamination. “Storage of water secures a continuous water supply for the household throughout the day; however, this has negative health implications,” explained Hamed. “Stored water is easily contaminated by dust, insects and flies.”

Regardless of whether or not they are connected to the water system, 85 percent of people reported storing water then drinking it later, rather than drinking directly from the tap. Many respondents to the SRC survey also remarked that the water tasted and smelled bad when it came from the tap, which is likely a result of the chlorine the water authority uses to treat the water. The water tastes better after storage because the chlorine level is low, but this also means it is not as safe to drink.

The other major problem in Fayyoum, as was evident from the SRC survey, is poor sanitation and a lack of awareness about hygiene. Few households are connected to a sewage system, 21 percent at the time the report was written, up from 3 percent in 1990, leading most of them to use conservancy tanks to collect wastewater. These tanks often overflow and are difficult and costly to empty. Further, only 17 percent of households pay garbage collectors to have their solid waste taken away. The rest either burn it, dump it into water drains or simply leave it on the street. “The poor sanitation system and the rough, poorly built toilets pollute the land and nearby water sources,” affirmed Hamed. “This causes the spread of diseases such as hepatitis, polio and diarrhea. Despite the importance of sanitation, Egypt is far behind in providing universal access to safe and hygienic toilets, and the poor are the ones who suffer the most.”

The SRC reported some correlation between good hygiene practices and a water connection, with 60 percent of households who were connected to the water network regularly washing their hands with soap, while only 49 percent of those without a connection engage in this practice. The SRC report stated that “survey data and focus groups discussions point to a lack of awareness of the relationship between specific hygiene conditions and prevalence of diseases, e.g. between unhygienic water and diarrhea.”

While the occurrence of diarrhea in Fayyoum decreased by 8.7 percent after a majority of houses were connected to the tap water network, the SRC maintained that the combination of better water pressure and connecting more houses to the sewage network, as well as increased outreach in local communities about hygiene, water safety and sanitation would lower this rate further.The report concluded that water quality will remain a problem in Fayyoum, in spite of the success of the universal chlorination of the tap water supply, unless adequate water pressure can be achieved on a permanent basis.

The SRC also recommended the involvement of local institutions, the private sector and nongovernmental organizations in finding solutions for wastewater disposal, educating the public about hygiene and devising a more effective system for evacuating household sewage tanks in the interim while the sewage system is being developed more fully. “At the end of the day, drinking water and sanitation facilities in Fayyoum need more work,” said Ramadan.