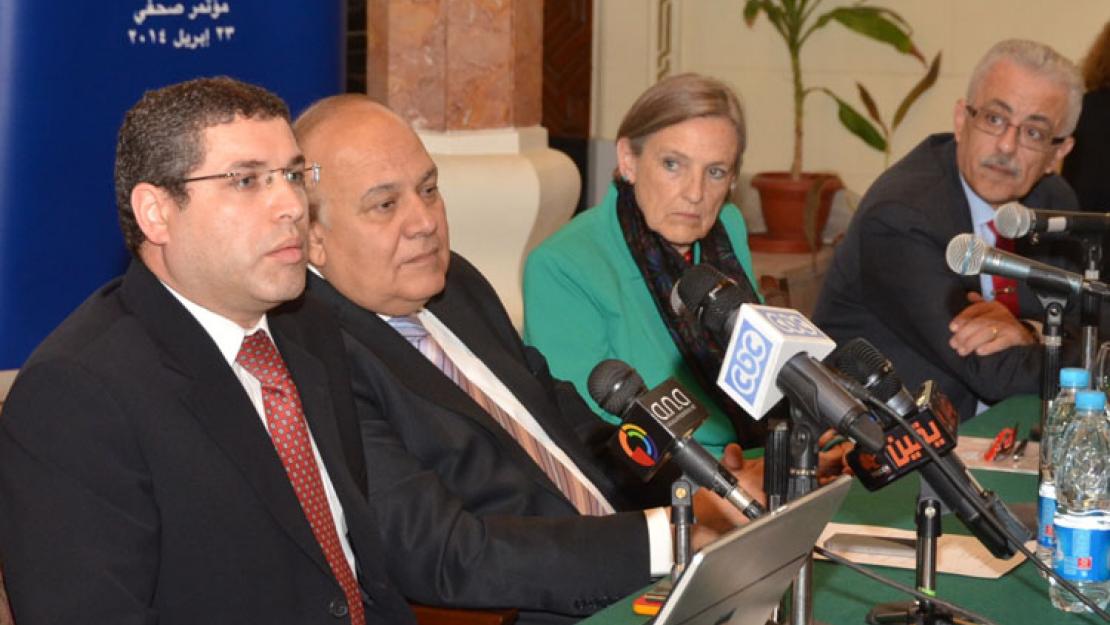 At a press conference held at AUC Tahrir Square, AUC researchers unveiled a new study that aims to create targeted and personalized cancer treatments that could decrease the crippling side effects of typical chemotherapy regimens. The research holds new promise for the treatment of cancer.

The press conference was attended by Lisa Anderson, AUC president; Amr Salama, AUC counsellor; Tarek Shawki, dean of the School of Sciences and Engineering; and Tamer Shoeib, associate professor and chair of the Department of Chemistry.

“AUC is a University that is deeply committed to advancing scientific discovery that has real and significant impact on both our community in Egypt and the global community at large,” said President Lisa Anderson. “We are seeing scientists in our labs tackle directly such pressing problems like thediagnosis of hepatitis C, thedevelopment of clean energy sources and thediscovery of enzymesfound in the depths of the Red Sea. Today, a research team led by Professor Tamer Shoeib is working on creating effective, customized treatments for one of the leading causes of death around the world: cancer. We are confident that his work is contributing to the global fight against this disease.”

Chemotherapy drugs, which are frequently administered as part of cancer treatment to either kill the tumor or keep it from growing larger while making the patient more comfortable, are often associated with immense side effects and high costs. Chemotherapy dosages are generally based on a one-size-fits-all approach, standardizing treatment based on cancer type. Even though dosing does take body volume and kidney function into account, it is not based on an understanding of how the drug reacts with individual patients at the cellular level. Personalized cancer treatment offers an innovative alternative, potentially increasing the efficacy of the drug, while decreasing the occurrence of side effects and lowering costs.

“To put the problem in perspective,” said Shoeib, who is heading the research, “approximately 65 percent of cancer patients receive chemotherapy, out of whom approximately 40 percent receive the wrong dose because the drugs are given on a standard regimen basis rather than being personalized to individual patients. The current model of chemotherapy today is that even though the standard dose may be based on body volume and kidney function, how an individual patient will respond to the drug is not known because it is not personalized. The end result is that the therapeutic outcome is uncertain, side effects are unpredictable and there is a huge variation in patient response.”

However, for a number of reasons, the drug may not reach this intended target, making it less effective and increasing side effects. “Not all of the drug goes to its intended location, so where else does it go? And how fast does it do that? Our research works to tailor the drug dosage to individual needs and conditions to be able to identify if there are genetic risk factors that would help us understand how the drug interacts with its intended target in the body,” Shoeib noted. “If we are able to determine these things beforehand, then the end result will be a more predictable and effective patient outcome because medical advice to patients will be better guided, and we can hope to lower side effects. We can also potentially decrease the cost of health care because more patients will be given the correct dosage.”

Not only is oxaliplatin less effective because of this interaction, but when the drug is prevented by carnosine from reaching the cancer cell, it ends up in the wrong place in the body, causing side effects. “When the drug is blocked by an obstacle, less of the drug gets to its target so it is less efficient, and there are more side effects because the other molecules are not the intended target of the drug,” said Shoeib.“The goal is to either move the obstacles [carnosine] out of the way, or make the drug look slightly different so the obstacles don’t recognize it anymore. In other words, we are trying to ‘fool’ the carnosine so that the drug will not be prohibited from reaching the nucleus of the cancer cell and, at the same time, look just right in order to attach properly to the DNA. It’s a difficult game because you want to make the drug look a little bit different, but not entirely so that it will still know its destination in the body and get to it. This will ultimately lead to better rational drug design.”

The research team’s findings were published as the cover story in the November 2013 issue of Metallomics, a Royal Society of Chemistry publication. The paper was coauthored by two of Shoeib’s master’s students, one in chemistry and the other in biology, and research was conducted in collaboration with a team from Loughborough University in the United Kingdom.

For Shoeib and his team, determining how a drug interacts with other elements in the human body is only part of the puzzle for personalizing treatment. When the drug penetrates the nucleus of the cancer cell, there are a number of ways it may attach to the cell’s DNA, which may produce different reactions. “When oxaliplatin attaches itself to the DNA, it’s not a static process,” explained Shoeib.“The drug doesn’t stick and stay there forever. It sticks and gets removed, and this process repeats over a long period of time. The rate of the drug removal from the DNA, which is also known as the DNA self-repair capacity, differs for one patient to another.”

In another 2011 cover paper for Metallomics, Shoeib and his team were able, also for the first time, to detail fast and selective methods to identify the ways that oxaliplatin attaches to cancer DNA at clinical concentrations. As there are various different ways oxaliplatin could attach itself to the DNA, Shoeib’s team aims to understand how and why it attaches in certain ways, and what way is preferable for optimal performance of the drug. “If we find out that information, we could develop better drugs or modify current drugs in order to make them more effective,” he said. “This is still in its infancy,” Shoeib noted, “but the ultimate aim is to try to find out how different people react to the drug so we have a model of those who respond best and can figure out why they respond better than other people. This would help us model drugs that allow others to get the same particular effect.” Going forward, Shoeib is continuing to research oxaliplatin and the carnosine interaction, specifically looking at the complexes that occur when the oxaliplatin is sequestered by carnosine. “When the drug gets sequestered, a complex is formed, and this complex must be metabolized in the body, or broken down into smaller bits,” he explained. “In the lab, we break this complex down and identify what the smaller bits are in order to mimic what would happen in the body.” Shoeib is also conducting research on identifying other molecules that may interact with the oxaliplatin, sequestering it and preventing it from accomplishing its purpose of attaching to the DNA in the nucleus of the cancer cell. This research could result in better drug design, as well as more logical treatment of individual cancer patients and lower costs, as less of the drug may be needed if treatment is personalized. “Ideally,” Shoeib said,“prior to patients receiving treatment at a clinic, doctors will check how much of these molecules a patient has. If there is a lot, then a more customized drug would be more effective.” Looking ahead, Shoeib is optimistic that personalized drugs will provide more effective cancer treatment. “We have a long way to go, but the progress we are making is encouraging,” he affirmed. “The personalized approach to therapy is a promising step that has the potential to change the way we think about chronic diseases such as cancer, and to revolutionize the treatment of these diseases.”