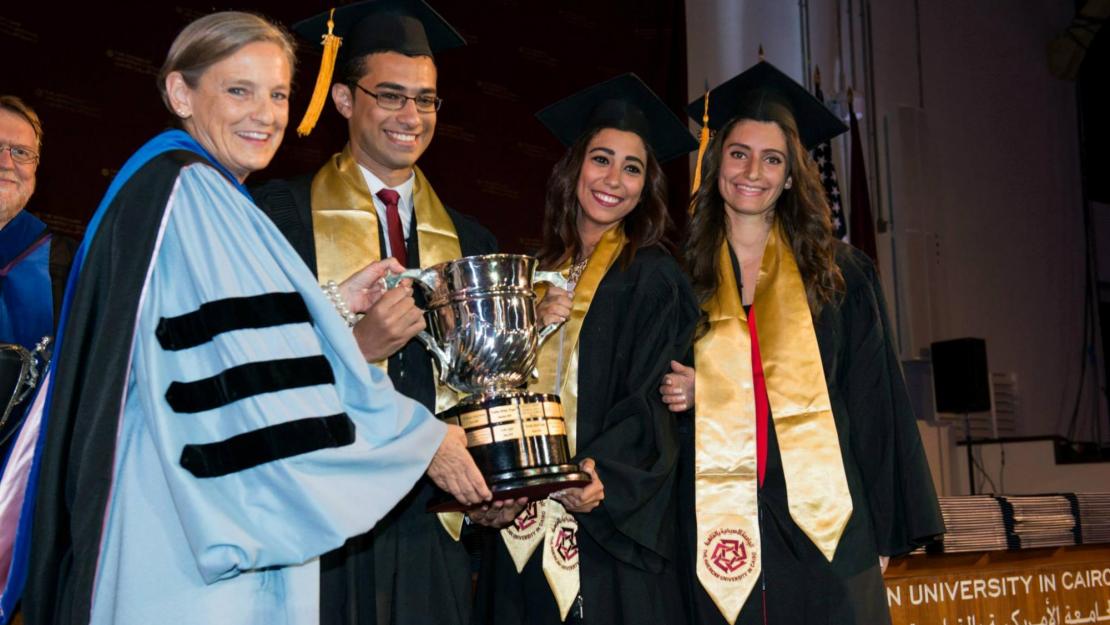 At each commencement ceremony, AUC recognizes students for their academic achievements, as well as their accomplishments outside the classroom. Named awards have been established by the generous contributions of individuals and families to recognize undergraduate and graduate students for their outstanding academic achievements, as well as their participation in community service work. These named awards include:

The Ahmed El Mehallawi Family Award was received by Hanin Aboutaleb, mechanical engineering graduate and recipient of the Middle East Partnership Initiative Tomorrow’s Arab Leader scholarship program, for demonstrating strong academic achievement and a commitment to community service. “It is such an honor to receive the Ahmed El Mahellawi Family Award. I felt that all the efforts I have put into working in community service activities while trying to keep up with my academic studies were appreciated,” said Aboutaleb. “Although my parents were a bit stricter about academics, when I won the award they started recognizing the importance of extracurricular activities and how it added a lot to my character development, without affecting my studies.” Aboutaleb was part of the Student Union services committee, and a member of Volunteers in Action, community service club helping orphans and underprivileged families. In Fall 2013 and until she graduated, Aboutaleb was a member in Glow, a community service club with a vision to develop a community of proactive leaders. “It was very challenging; always trying to balance between midterms, projects and my thesis while being committed to community service work. However, I believe my passion towards community service and development in general helped me to stay up to it and never quit,” Aboutaleb emphasized. Aboutaleb also went on a semester abroad at the University of Colorado, Boulder, and took part in several internships. She had an internship at Halliburton, Nestle, General Electric and Al Najah Private School. “The 17-year-old Hanin who first came to AUC turned out to be a completely different person in 2015. I was encouraged to attend student conferences in Egypt, Lebanon, Jordan and the US. I was given the chance to travel on a semester abroad to the University of Colorado, Boulder, and get exposed to a different educational system and a different culture. I went to several training camps and even organized a few by myself. Activism, leadership, social responsibility and development are all brilliant ideas that cannot be fully appreciated unless you experience them yourself.  And in college life, student activities are our beehive for all those valuable principles.”

The Ahmed H. Zewail Prize for Excellence in the Sciences and Humanities was received by Haitham Kandeel, who earned his bachelor’s degree in chemistry. “I simply cannot describe my feelings in words; it’s something I cannot comprehend. But I know for sure it’s a mix of hope, euphoria, motivation and satisfaction. I feel like a huge amount of trust has been invested in me; that I should not turn a blind eye to human affairs, that I hold a great responsibility in the sense that I have to exert more effort in scientific research and inquiry. And most importantly, stress on what makes us what we are, humanistic values,” said Kandeel excitedly.  Kandeel’s thesis topic that was nominated for the award was about using science as a source of morals and philosophy. He discussed how science could be used in order to formulate a set of morals that could apply to everyday life, as well as a philosophy that could be used to approach unanswered questions regarding our existence and motivations. “I consider myself privileged to have had my undergraduate studies at AUC, where I developed my critical thinking skills and was introduced into the realm of scientific research. However, being an AUC student is not merely a privilege; it bears many responsibilities that include encouraging the society, especially young men and women, to think more critically and to reason properly before making major or minor decisions. I am proud of, yet humbled by, the fact that I belong to the diverse society of AUC,” he said.

The Dr. Abdel Rahman El Sawy Award was earned by Samah Ahmed, computer engineering graduate and recipient of the Public School Scholarship Fund. Ahmed joined many extracurricular activities on campus, including SABEEL, a science club that seeks true knowledge and shrinks the gap between science and religion. Ahmed was very interested in philosophy and she took many philosophical courses, which she considered life-changing. Passionate about computer security, Ahmed is planning to develop her skills in that particular field. “I have some ideas for mobile apps that I hope can benefit people in Egypt, so I will be forming a team to carry out my idea.” Ahmed stressed on her experience at AUC, saying, “With such a life-time opportunity to come to AUC, comes greater responsibility.”

The Mohamed El Beleidy Academic Award (The President’s Cup) was given to the students who rank highest in the graduating class. It was presented to three students who all earned a 4.0 GPA, including Islam El-Tayar, computer engineering; Hana Marei, economics graduate and recipient of the Shell Endowed Scholarship; and Noor Akroush, construction engineering. “After the time and the effort we spent to maintain a high GPA, it was such a happy moment to receive this award,” said El-Tayar. “Being among the students who receive it every semester is really an honor and was a perfect end for my life as an undergraduate student at AUC.”  In addition to maintaining his academic outstanding, El-Tayar was also involved in many extra-curricular activities on campus. He was a member in the Robotics and Astronomy Club and was head of the information technology committee in the Cairo Model United Nations, and president of the Computer Science and Engineering Association. “It is all about balancing the equation between having fun and getting some work done,” he added. Reflecting on his five years experience at AUC, El-Tayar believes that he was very luck to study at such a great university. “It might be the only university in the region that will really change the way you think about everything and develop your character in all aspects. I do not think I would have been inspired by everyone I met from professors, friends and staff as I did at AUC — that was really the perfect combination and environment for anyone to succeed and be prepared for the world outside.”

Akroush seconded El-Tayar’s sentiments towards AUC, saying, “Belonging to an institution as important as AUC in the region is an honor. I will always value being part of a place that helped shape the region with its academic and extracurricular activities,” she added. “AUC has developed my academic career through technical and practical knowledge that I gained in the construction engineering field from the best faculty members. Furthermore, the liberal arts system has helped me to develop into a well-rounded person with a good knowledge of the world.”

May Seoud, political science graduate, is the recipient of the Nadia Younes Endowed Award for Public and Humanitarian Service. Seoud has been a member in the Cairo Model United Nations (CIMUN) since she joined AUC. “There wasn’t a single day in which I wasn’t a proud member of this organization. Ever since I became a part of this family I have not missed a single conference, I have not wasted a single opportunity to help someone and I have never ignored a single chance to give young students what I have been given to develop,” she said. “I realized in my first year at AUC how much CIMUN can influence people and change minds and I felt how someone like me, young, inexperienced and still in the beginning of their journey is capable of making a difference. I realized that ideas and knowledge are armor and shields and while many things can be killed, only ideas live forever. I used my position as a secretariat to encourage people to make a difference, to make youngsters see equality and social justice as something as necessary as air and water.” During the two years as a secretariat, Seoud inspired and encouraged five delegates to become secretariats to help others, five other delegates to start MUN at their schools, more than six delegates to attend international conferences, and two other delegates who went to work with UN Women and Harrassmap. “I realized long time ago that one person cannot change the whole world, but one person can inspire many others to take a step forward and make life better and easier for those who will come after us. CIMUN gave me this inspiration and I couldn’t have used it in a different way, I had to help others.” In addition to Seoud’s participation in CIMUN, she served as the associate English managing editor for the Student Union newspaper; editor at Heya, AUC women’s initiative and empowerment club; assistant head of public relations at the Student Union Echo, which is responsible for the creation and coordination of AUC TV, radio and talk shows; and she was a public relations member in the Theatre and Film Club in 2011.

Farah Kobaissy, a master’s candidate in gender and women’s studies, was the recipient of the 25th of January Award for Scholarly Excellence. “Receiving the 25th of January Award is a big honor for me. Not only because it acknowledges my academic work, but most importantly because of the award's political character,” said Kobaissy. “The award attests to the fact that academic research is not an apolitical endeavor and that the academic sphere together with the social and political spheres are immersed and interconnected.” Kobaissy’s research that was recognized at the commencement ceremony analyzed the migrant domestic workers’ struggle to unionize in Lebanon. Her research discusses the processes through which domestic workers have been produced as an ‘exceptional’ labor category through media, activists’ and academic discourses. Second, it situates the labor union organizing for domestic workers within the larger scene of the labor union movement in Lebanon suggesting that under the current neoliberal order, labor unions cannot continue to ignore these 'excessive' laboring bodies that are increasingly informal. It also examines the process of unionizing the domestic workers highlighting the potentialities, as well as the obstacles confronting this process. It also looks into the multiple power relations that shape their union through axes of class, gender, race and nationality. Additionally, it analyzes the contribution of women's rights organizations in rendering visible cases of abuse against migrant domestic workers. “If I was awarded the January 25th Award for my research, this is because I have received primarily an excellent academic and intellectual guidance by my professors at the Cynthia Nelson Institute for Gender and Women's Studies at AUC,” stressed Kobaissy. “The research wouldn't have been possible without the generous academic support and guidance of my professors Hanan Sabea and Jennifer Terrell and my advisor Martina Rieker whose academic, political and personal commitments towards her students constituted an important part of my MA experience at the AUC and made it two years of learning and maturing.”