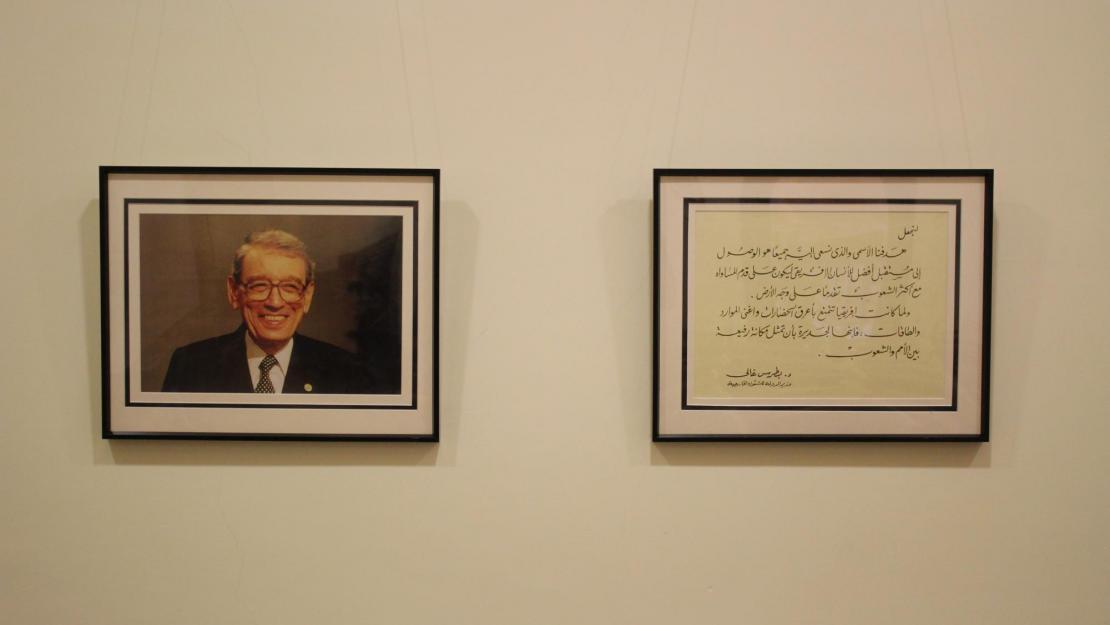 The first Arab and African to serve as secretary-general of the United Nations from 1992 to 1997, the late Boutros Boutros-Ghali donated his published works and more than 13,000 of his personal book collection to AUC’s Rare Books and Special Collections Library in 2015. Highlights of Boutros Ghali's diplomatic life are currently on display in an exhibition at AUC's Rare Books and Special Collections Library.

“Boutros-Ghali's gift to AUC’s Rare Books and Special Collections Library was an exceptional collection of books, photograph albums and personal papers documenting his professional and public life, in particularly his very decisive years as secretary-general of the United Nations,” said Philip Croom, associate dean of Rare Books and Special Collections Library. “Many of the books contain personal dedications from authors and prominent figures such as Hillary Clinton, Barbara Bush and Fidel Castro.”

The Boutros-Ghali collection at AUC is helpful for academics interested in research in Egypt and the region. The collection of books has unique features including stamp collections, art prints and rare signatures from influential leaders. A unique example of his exquisite donations is a book he received from the Emperor of Japan in 1990. The cover was hand-made and includes formal portraits of the emperor and empress during their enthroning ceremony. In addition to books, the collection consists of academic journals on international relations, Coptic art, monastic life and photo albums documenting Boutros-Ghali's visits with persons of note. “The collection represents an exceptional resource for AUC and scholars worldwide seeking to understand not only events of the period, but also eager to do research about his life and accomplishments,” said Croom, noting that some of the essential research tools include original documents such as agendas and minutes from Egyptian parliament meetings, in addition to maps and travel books.

In addition to visiting AUC in the 1970s, Boutros-Ghali delivered a lecture at the University in 2003 titled "Reforming the United Nations," which took place during the opening ceremony celebrating the 15th anniversary of the Cairo International Model United Nations.

Boutros-Ghali’s Life as a Diplomat

Appointed as the sixth secretary-general of the United Nations, Boutros-Ghali had a distinguished career as a scholar, politician and diplomat. His five-year term as the UN secretary-general came during some of the world’s most difficult times, with war breaking out in Europe and the genocide conflict in Africa.  One of his pivotal roles during his tenure was the signing of the peace treaty between Israel and Egypt in 1979, also known as the Camp David agreement.

After leaving the United Nations in 1997, Boutros-Ghali served as secretary-general of the International Organization of La Francophoni, an organization of French-speaking nations. In 2003, he became director of the Egyptian Human Rights Council and chair of the South Centre, an intergovernmental organization that serves as a policy think tank for developing nations.

During his diplomatic career, Boutros-Ghali authored An Agenda for Peace (1992) and published two memoirs: Egypt's Road to Jerusalem: A Diplomat's Story of the Struggle for Peace in the Middle East (1997) and Unvanquished: A US-U.N. Saga (1999).