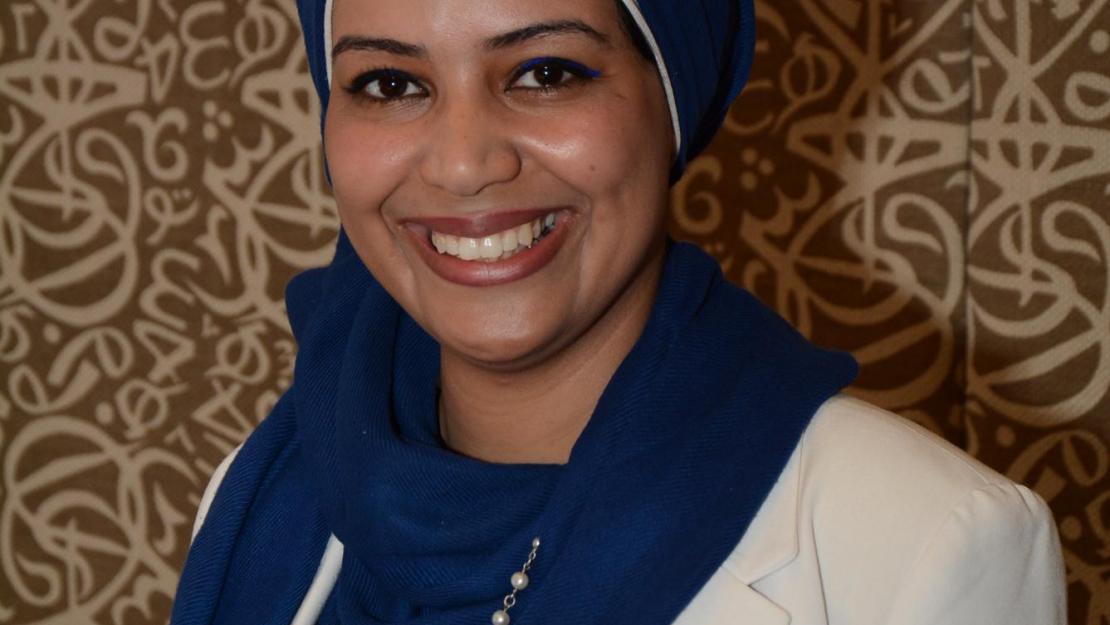 When Eman Motawi returned to her homeland, Palestine, to live there for the first time at age 15, it was a bittersweet reunion. “It was beautiful; it was more than what I imagined. But what I didn’t imagine was the concept of living under occupation,” said the AUC graduate student.

“It’s very bad when you hear about the situation, but it is completely different than what is on TV or in the news, when you are a member of the people, living in the same conditions and seeing people suffer from the horrible economic situation,” explained Motawi, who is studying community psychology and sustainable development at AUC as part of the Tarek Juffali Endowed Fellows Program.

But instead of being discouraged by the stalemate between Israel and Palestine and the plight of refugees, Motawi was inspired. “It really motivated me to change the community and build on the resilience and strength we have, even with all the harsh circumstances we are facing,” said Motawi. “Being a refugee was a big element in my decision of what to study. It helped me visualize what I want to do in the future.”

Even while Motawi was living with her family in Lebanon before returning to Palestine, that part of her identity was ever-present, and she struggled with the effects. “‘Refugee’ is a really heavy term, and it has a lot of implications in your life, on your personality and the obstacles you face,” said Motawi. “You always carry that label. You are seized by certain constraints that you can’t escape and prevented from your freedom of speech, freedom of movement and freedom of education.”

Despite the limitations of her situation, Motawi went on to attend the University of Al Azhar in Palestine and was involved in community service activities through her school, working in communications and meeting with journalists and activists as the voice of her community. After graduation, Motawi pursued work with the United Nations Relief and Works Agency for Palestine Refugees (UNRWA).

“Being a refugee and living the life of a refugee have enabled me to see different refugee communities that are trying to create real change,” said Motawi. “I was observing all their efforts as part of this community, but I always wanted to play a role in changing the imposed reality on many vulnerable groups. I worked with local and international nongovernmental organizations in Palestine to find a way to empower myself and others.

It was when Motawi moved to the United Nations Development Programme (UNDP) that she expanded her focus to include community development. “I was not solely interested in human aid, but also helping the communities to be more developed and to reach a certain level of sustainability that can benefit future generations,” said Motawi. “Change can’t come from temporary funding or services given to you by other countries. It has to be something from your own society.”

Still, Motawi felt that she could do more, but needed the education that would propel her forward. “I knew I needed to gain certain academic knowledge that would give me the tools to enhance my future work with communities,” recalled Motawi. “That’s where I got the idea to study at AUC. I discovered they had a new program, the first one in the Middle East, in sustainable development,” she said. “This is what I wanted to study, not only to help my country, but also other places in the MENA region where, not just development, but sustainable development is critical at this time.”

Even after discovering the program at AUC, Motawi faced another setback. Because of her situation in Palestine, she had to apply several times and her finances were uncertain. “I had to fight in order to come here, and I took the risk of investing my own savings because the program was good and this is what I wanted to study,” stated Motawi.

Her determination paid off. Once Motawi got to AUC, she was accepted into the Tarek Juffali Endowed Fellows Program, and her tuition was further supplemented by financial aid and work study. She also received the Ryoichi Sasakawa Endowed Young Leaders Fellowship in Spring 2016 that allowed her to complete her degree.

At AUC, Motawi was encouraged by the wide scope of the program, incorporating interconnected elements to paint a full picture of the community environment in which individuals live. “This is one of the most amazing programs because you get the direct knowledge, but you also discover there are other layers affecting what you are doing,” said Motawi. “For example, on any project you can look at the business side, the engineering side and how policy relates to that and combines everything to create change in the community.”

In the course of her graduate studies, Motawi also got to know the community psychology department at AUC. “I wanted to improve my understanding of the community ecosystem in general, so I decided to pursue a double degree,” said Motawi. “Community psychology has changed my perspective toward the relationship between the community and its individuals,  focusing on a participatory approach where everyone's voice matters.”

“It’s not easy, but it’s worth it,” added Motwai. “When you are doing that and you feel the connection between the two programs, you find it very worthwhile.”

It’s no surprise that Motawi, who is graduating this year, won’t end her education here. She plans to pursue a PhD in Europe, using her personal experience and education to address the new wave of refugees flooding the continent.

“I want to study how we can help them integrate better and in more sustainable ways,” stated Motawi.  “We have to learn to build bridges between cultures in order to reach a type of integration where it doesn’t matter where you are from. In the end, we are all humans sharing the same values.”
​