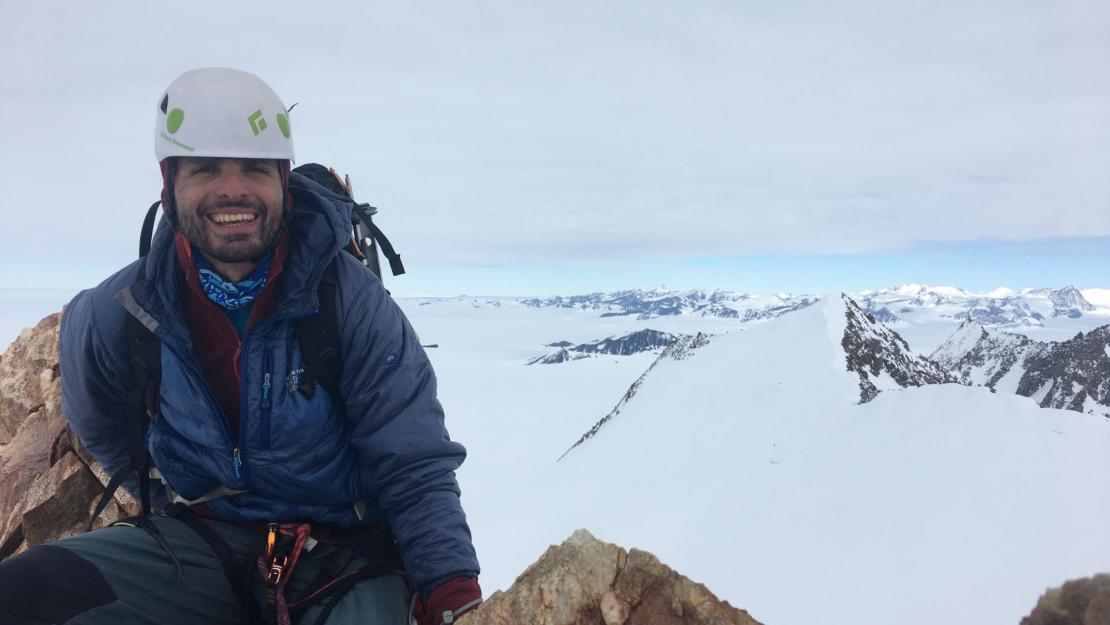 Omar Samra climbs Mount Teela, which he named in honor of his beloved daughter

AUC alumnus, UN Goodwill Ambassador and acclaimed adventurer Omar Samra ‘00 has recently made headlines yet again, becoming the first worldwide to climb three different peaks in the Ellsworth Mountains, the highest range in Antarctica. In recognition of this historic accomplishment, Samra was given the honor of naming all three mountains.

Samra chose to name the three peaks, untouched by man for millions of years, Mount Samra, Mount Marwa and Mount Teela, after his family name, his late wife and his daughter, respectively. “It has always been a lifelong dream of mine to climb a mountain unclimbed before," said Samra. "This is what made this expedition so special and unique. To me, these mountains represent the eternal, grace and purity. For this reason, and guided by my intuition and the mountains’ aesthetics, I named them Mount Samra, Mount Marwa and Mount Teela, after my family name and the two greatest loves of my life. May we always be together."

Samra named his latest expedition Planet VII, representing his belief that exploring Antarctica's rugged and unique terrain is the closest experience to being on another planet while still on Earth.

Breaking records has become second nature to Samra. He is the first Egyptian and youngest Arab to climb Mount Everest. He is also one of only 40 people in history to complete the Explorers Grand Slam, which includes summiting the highest mountain on all seven continents and skiing, with a 60-kg sled, the last degree of the North and South Poles.

More recently, Samra has turned to space travel. He is among 23 winners from more than 2 million applicants across 60 countries who participated in the AXE Apollo Space competition, which will allow him to travel on a sub-orbital space flight with XCOR Aerospace and will potentially make him the first Egyptian in space. He has also launched the Make Space Yours initiative, which encourages students to come up with creative ideas for space experiments and travel, with the chance to win prizes or have their experiments flown to space on Samra's flight.

Focused on philanthropy, Samra founded Marwa Fayed’s Toy Run, also named in memory of his late wife, to carry on her legacy of providing toys to underprivileged children in Egyptian orphanages. The initiative, now a nongovernmental organization, has delivered more than 100,000 toys to children in more than 10 countries and was named MBC's Humanitarian Project of the Year in 2013. Samra also assisted in relief efforts to help victims of the 2015 Nepal Earthquake.

Samra has inspired others through more than 150 talks worldwide and plans to travel across Egypt this year, addressing more than 200 schools and universities through the Make Space Yours initiative.

Recognizing his achievements, in 2008, AUC presented Samra with the Young Alumni Achievement Award, as well as the Alumni of the Year Award by economics and business faculty. He was also honored at the President’s Dinner series, which recognizes important members of the local and global communities whose work betters Egypt and the world. In addition, Samra was included among Forbes Middle East’s 100 Under 40: The World’s Most Influential Young Arabs of 2016.